The 2020 Dexter football schedule has been released as the Dreadnaughts take aim at their third consecutive trip to the Michigan Football State Playoffs. And the good news is the first game isn’t against Chelsea.

The challenging news is that this schedule appears more challenging than the 2019 schedule. Dexter will face five playoff teams from last year including three in the first four games.

Dexter-Chelsea has led off the last two football seasons with the Bulldogs winning 34-20 in 2018 and escaping with a 22-17 win last year.

The big rivalry game will be Sept. 18 at Chelsea after each team has played three games.

The 2020 lineup features two new teams, who book-end the schedule.

Dexter opens at 7 p.m. on the road at Utica Ford. The Falcons went 4-5 last year but have been improving. They won just two games in 2016 and 2017 before winning three in 2018 and four last year. Utica Ford has reached the playoffs only once in the last nine seasons. 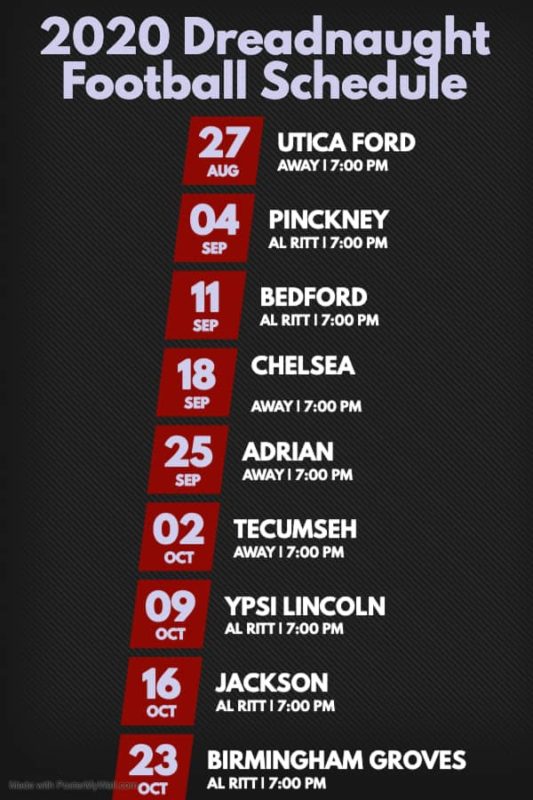 The Dreadnaughts will host Birmingham Groves on Oct. 23 in their final regular-season game. And the Falcons could be one of the toughest teams on Dexter’s schedule in 2020.

Groves, who play in the tough OAA-White, went 7-2 last year in the regular season to reach the postseason for the seventh consecutive year. Their first game was against Warren De La Salle, which forfeited the game. They lost 42-7 to Birmingham Seaholm, who reached the state semifinals. The Falcons defeated Seaholm 35-14 in the regular season.

Dexter’s second game of the season is the home opener on Sept. 4 against Pinckney. The Dreadnaughts defeated the Pirates 49-25 in a rain-soaked shootout last year. The Pirates reached the playoffs last season and lost in the first round to Coldwater.

Dexter’s SEC crossover game will be at home this season against Bedford. The Kicking Mules went 6-3 last year to reach the state playoffs. Bedford lost in the first round to Detroit Martin Luther King, who lost in the state championship game. Bedford is a sold program and have reached the playoffs four straight seasons.
After Bedford, the Dreadnaughts hit the road for three straight games: at Chelsea (Sept. 18), at Adrian (Sept. 25) and at Tecumseh (Oct. 2).

Dexter’s final SEC game is Oct. 16 at home against Jackson. The Vikings went 5-3 last year and reached the playoffs, falling to Battle Creek Lakeview in the first round. The Dreadnaughts defeated Jackson 57-21 last year.

Dexter has reached the state playoffs two straight seasons after never qualifying for the postseason in the program’s history. They lost 31-24 in overtime to South Lyon in 2018 and fell at home 41-39 to Livonia Churchill last season. Both games were in the first round.