Had enough of the winter gray? Dexter Community Band invites you to imagine the sights, sounds and colors of a Caribbean cruise at its free winter concert on Sunday, March 8.

The band will be playing music inspired by the rhythms and melodies of Mexico, Cuba, Jamaica and other ports of call south of the border. The 3 p.m. event will be held at the Center for Performing Arts in Dexter High School, 2200 North Parker Road, Dexter.

The concert will include Jamaican Folk Song Fantasy, a piece by John W. Stout, the Ann Arbor-based composer and entrepreneur who passed away from cancer in April 2017 at age 60. Gail Stout, John’s widow, said her husband visited the Caribbean annually, often listening to local musicians and collecting recordings of folk songs from the islands that dot the region.

“John wrote Jamaican Folk Song Fantasy in a day after spending 10 days in the Caribbean,” recalled Gail Stout, a trumpet player who has performed with Dexter Community Band in the past.

Other pieces being performed are: Mexican Pictures, a rhythmically complex suite of four movements based on Mexican folk music by Franco Cesarini; Cuban Overture, which George Gershwin composed after spending two weeks in Havana; Mojito, by Takashi Hoshide; Shin Kazuhara’s Samba de Loves You; and Caribbean Hideaway by James Barnes.

The 85-member Dexter Community Band performs four free concerts a season. After the winter performance, the band’s final concert will be May 17. The theme will be “The Wild West.”

Founded in 1982, the Dexter Community Band is comprised of volunteer musicians from the local area. A registered 501(c)3 non-profit organization, the band performs professional-level symphonic wind music at four free concerts a year. There are also several free “Evening of Ensembles” featuring small groups from the band. For additional information about the band or how to provide financial support, please visit http://www.dextercommunityband.org/. 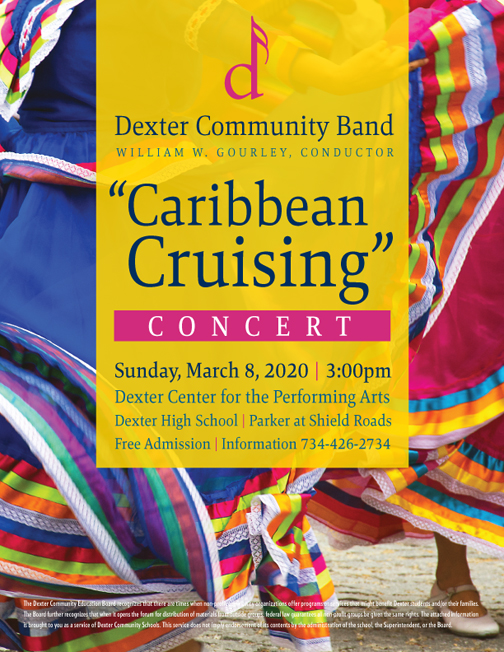