Luke Sayler is far more than just a swimmer on the Dexter swimming and diving team. The senior is an inspiration, role model and leader of a team that not only cherishes all of those roles but appreciates the value they bring to a program. And if you have been following swimming over the past decade, you know that the Dexter swimming and diving program has been one of the most successful in the state – in and out of the water.

And it all starts with student-athletes such as Luke Sayler.

“Luke is a great leader,” says Dexter Coach Michael McHugh. “Our team really looks up to Luke. We’ve watched him work with the underclassmen, giving feedback on their starts, turns, and strokes. His hard work and leadership have earned him the respect of his team, both in and out of the pool.”

High school sports is about dedication and success, but it’s also about making friends and having fun. McHugh says Sayler understands how to balance hard work with play.

“We’ve watched him have a lot of fun this season, while still maintaining high expectations for himself and his teammates,” McHugh said. “Luke’s season has gone about as good we could have hoped for. In the past, he has struggled to get going and has taken a while to get his state cuts. This year, he got his 100 free in the first meet!  I can’t wait to see what he does when he is tapered at the state meet.” 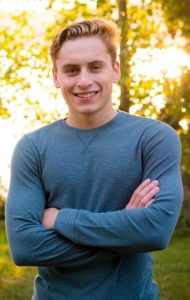 Sayler acknowledges both aspects of swimming, a sport that is unequalled when it comes to commitment. They get up before the sun to practice and work out after school. But to work that hard you also have to love what you’re doing. And the Dreadnaughts, to a man, clearly love what they’re doing.

“This year is all about having fun while working hard,” says Sayler, now a senior at Dexter. “Our team has fallen in terms of numbers but has become much closer as a result. We work as hard as we can and have fun with the results that we see during our meets.”

In other words, it’s fun to win. And Dexter knows all about winning in swimming. Sayler has been a part of the past three state champions as a Dreadnaught and there is no better feeling than being the best in the state.

So what are the goals for the FOUR-time defending state champions?

“For this team, we always strive to work the hardest we possibly can,” Sayler says. “Recently, this team has experienced some amazing seasons, winning the state title consecutively for the last four years. Although the hardware we have received from such meets is amazing, it all came because of the effort given throughout the season in preparation for the state meet. 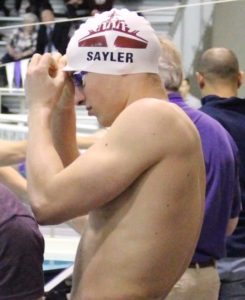 “We expect that all effort is given all of the time, and everyone pushes each other during practice and meets, no matter what place the team may get. We allow the results to speak for themselves.”

And the highlights are already beginning to fill the pool this year.

“One of the highlights this season was the hair bleaching party, we always have so much fun during that tradition,” Sayler says. “The best meet I’ve had all season was against Groves, U-D, and Brother Rice. There, I got my second state cut this season, while many of the boys swam season best times or lifetime best times in their events. Personally, this has been the best season I’ve ever had, getting both state cuts in the first two months of season.” 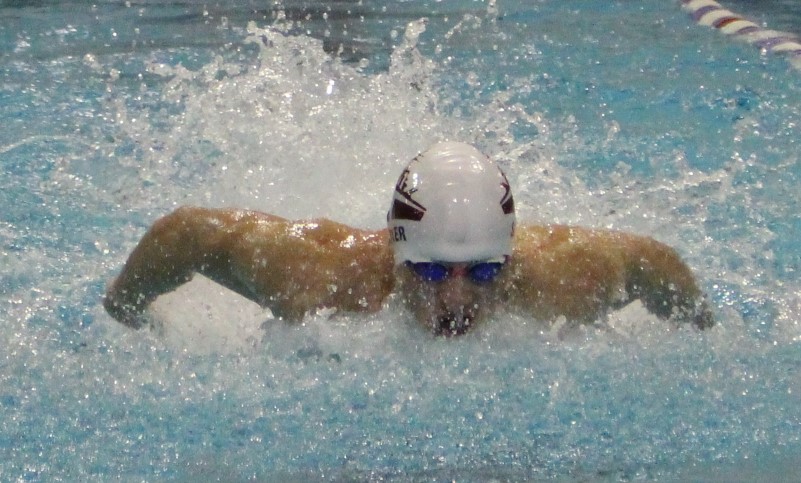 Luke, the son of Elizabeth and Scott Sayler, credits his mom for nudging him into the pool. She swam when she was young so she thought Luke might enjoy it as well. He started to take swimming seriously in sixth grade with DCAC, and then joined the Mill Creek swim team in seventh grade.

“Swimming with our school teams was a different atmosphere than the club, and it was an amazing time being on that team,” he says. “I was one of the captains in eighth grade and was the top scorer for our team that year.”

He began his high school career in swimming as a freshman and was a member of Dexter’s state championship team that featured plenty of strong swimmers and role models. “Watching them become state champions that year really drove me to get a state cut the next season,” he said. “I swam well my freshman year, and received the Freshman Swimmer Award. But I made states my sophomore year by getting the exact time needed to go to states in the 200 freestyle at the SEC meet.” 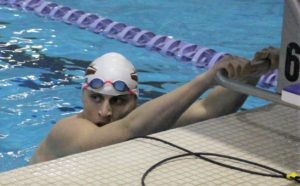 Sayler says he struggled as a junior. But he did make the state cut in the 100 freestyle and was put on the 200 freestyle relay that finished second in the state. He said being on that relay was the most exciting and nerve-wracking experience of his swimming career.

“As of now I have been a part of three state championship teams, making it to states personally for two of them,” he says. “I wanted to swim much better my senior year, and so far I’d say I’ve done just that. I made my first state cut in the 100 freestyle at the first meet this season and got my 200 freestyle cut a week after Christmas break ended.”

Sayler also has been swimming on both the 200 and 400 freestyle relays along with his individual events.

But swimming is only part of this young man’s schedule. He plays water polo, both for Dexter and Wolverine Water Polo, and was a key member for the Dreadnaughts who finished second in the state this past season. And he also has a 3.52 grade-point average.

How does he work all this into his schedule?

I always make sure I stay organized and make time to study every day, but in moderation,” Sayler says. “I find it hard to dedicate all of my time to school and still maintain a healthy mental state, so I make sure to include some time on the weekends to enjoy myself away from the pool and schoolwork.

And somewhere along the way Sayler found time to become an Eagle Scout.

“I became an Eagle Scout in October 2019,” he says. “For my project I designed and built a large rustic bench and completed a lot of landscaping work in an outdoor chapel at the Webster United Church of Christ. The bench was made for musicians who play during the outdoor services, and the landscaping aided in keeping weeds and grass to a minimum. We also leveled the ground to make the area more comfortable. I chose this project because I saw a need for improvement in a church that has given so much to my troop, Troop 477.” 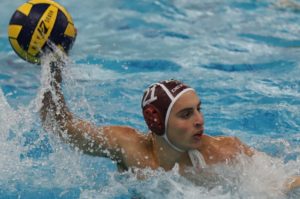 So where does all this drive and passion and dedication come from? While it’s part of his DNA and upbringing, it’s also part of a plan he himself has put together. A plan that so far is working to perfection as he seems to be swimming towards perfection.

“You have to be very driven and have great time management skills,” he says. “Being away from home for more than 11 hours a day forces you to make sure you stay on top of your studies. You also have to have a lot of dedication to staying focused in class and at home. I would always set goals for myself, whether it’s for what time I should finish with homework or what grades I want to get in class.”

As for the future, Sayler is keeping his options open. He plans on studying engineering but would also like to keep playing water polo in college.

“Swimming has been a blast in high school, and I know it has helped me immensely in water polo,” Sayler says.  “I am so grateful to be a part of the legacy of Dexter High School swim team and the culture of hard work, and I will always carry this team in a special place in my heart.”

And he’s giving back to the program by just being himself – and hopefully others will follow his lead.

Written By
Terry Jacoby
More from Terry Jacoby
Dexter fans had to admit it. Even early in the fourth quarter...
Read More