Sometimes, the shots just don’t fall. And that’s what happened on Friday night for the Dexter girls’ basketball team. Unfortunately, it happened against rival Chelsea in a game that had SEC title implications.

The Dreadnaughts converted only 10 field goals despite many open looks and fell 40-23 to Chelsea in the first of a varsity basketball doubleheader at Dexter. The Dreadnaughts fall to 9-3 on the season while Chelsea improves to 11-1.

Dexter’s first and only three-point basket came from sophomore Brianna Rodriguez with 1:48 remaining in the game. On Tuesday, Dexter had one player knock down six three-pointers and the team scored 80 points in a win over Pinckney.

“Our shots didn’t fall,” said Dexter head coach Lauren Thompson following the loss to Chelsea. “We shot under 10 percent, which is uncharacteristic of us. It’s hard to win games when you can’t put the ball in the basket.” 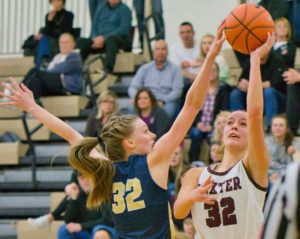 “I’m proud of my girls and I’m proud of how hard they played,” Thompson said. “This is always a tough rivalry game, and sometimes you get a little too amped for it. So it’s always a little bit difficult.”

Chelsea asserted itself as the superior team in the paint from the game’s onset. Dexter had absolutely no answers for Chelsea senior Riley Davis, who dominated in the post, scoring a game-high 18 points, and extending several possessions for the Bulldogs by securing crucial offensive rebounds.

“We needed to focus more of our energy on rebounding,” Thompson said. “We didn’t assert ourselves offensively in the post and they did.”

After Chelsea jumped out to an early 4-0 lead, Dexter responded with a basket from Kaila Simpson on a nice backdoor pass, cutting Chelsea’s lead in half.

Chelsea opened a big lead with a 10-2 run, stretching from late in the first quarter to midway through the second. Davis and Megan McCalla combined to score all 10 points for the Bulldogs. 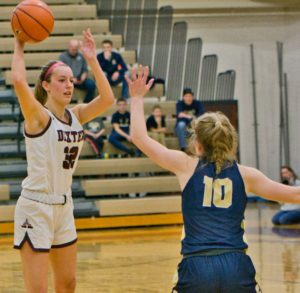 Dexter was able to cut into Chelsea’s lead before the half, with two-point baskets from Alayna Babut, Kylie Cabana, and Rodriquez, but trailed 20-10 at halftime.

Dexter employed a full-court press starting late in the third quarter, but was ultimately unable to create enough turnovers to take advantage.

The Dreadnaughts cut Chelsea’s lead to 11 with two field goals from Cabana late in the third quarter, but an off balance shot by Chelsea’s Andrea Kowalski in the final seconds of the third quarter banked home, essentially killing any momentum Dexter had going into the fourth quarter.

Chelsea’s 9-1 run in the beginning of the final quarter all but sealed Dexter’s fate, and a late 5-0 run by the Dreadnaughts did nothing to change the outcome.

Dexter returns to action Tuesday when it hosts SEC foe Tecumseh. The game is scheduled to tip off at 7 p.m.

“We’re going to take this as a learning experience and a growth opportunity, and be ready to get back after things on Tuesday,” Thompson said.

All photos by Dan Robelen / WLD

Written By
Terry Jacoby
More from Terry Jacoby
The Dexter and Huron girls’ golf teams met out on the links...
Read More