Abigail Moraschinelli, a seventh-grader at Mill Creek, is looking forward to having some “fun” being Miss Spider in the upcoming Dexter Community Players’ presentation of “James and the Giant Peach” (Jan. 24-26). And even though she is still a young actor, she’s already a veteran of the stage.

This will be Abigail’s fourth time on stage with the DCP. She played Alice in “Alice’s Adventures in Wonderland,” she was Snow White in “Snow White and the Dancing Dwarfs,” and was a Torryadorable in “Gypsy.” She also has done theatre at Dexter High School and with the Ann Arbor Civic Theater.

“I love preforming, it’s so much fun running around with a bunch of your friends, wearing silly cloths, fancy makeup, crazy hair, and just playing pretend on a big stage,” says Abigail, the daughter of Jennifer & Robert Moraschinelli of Dexter. “And that’s exactly what it feels like. In my last show I was just arguing with my friend the whole time, and those are some of my best memories this year.

“In all three DCP shows I had so much fun, and have so many fond memories and great friends from those shows.” 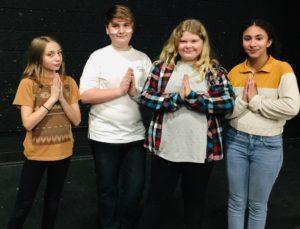 She is excited about making new memories in “James and the Giant Peach.”

A magical peach! An imprisoned boy! Insect friends! An incredible journey! This amazing adventure of James Henry Trotter will fulfill the fantasy of anyone who has ever dreamed of escape. Roald Dahl’s story comes hilariously to life in this delightful dramatization that reveals the wickedness of some, the goodness of others, and the indecision encountered by many when they are faced with crises. You will see James, (as he cleverly gets the Peach out of danger), the wise Old-Green-Grasshopper and the pessimistic Earthworm. You will also see James’ mean Aunt Spiker and cruel Aunt Sponge come to a suitably sticky end. The action is tied together by the Narrator, a storyteller, motivator, emcee and audience friend.

There also is Miss Spider.

“In the show, Spider is pretty much the only arachnid who reacts to things realistically,” Abigail says. “She yells and cries, the whole nine yards.

“Working with DCP is great. I’ve known a lot of the people in this show for years. Sometimes, it gets a little tense, but in the end we all hug and laugh, because honestly we’re like one big family.”

Abigail says the cast for “James and the Giant Peach” is “special.” 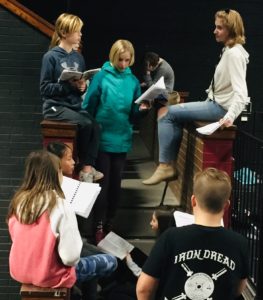 “The cast is wonderful,” she says. “Everyone fits their character so well and (from a personal perspective) I’ve done a show with almost every single person in this cast.”

Abigail says her “web” is one of her favorite parts of her character.

“To know what I’m talking about you have to come see the show,” she says.

Dexter Community Players is proud to present their third annual youth production, James and the Giant Peach.  The show will run Jan. 24 – 26, with Friday and Saturday performances at 7 p.m. and afternoon performances Saturday and Sunday at 2 p.m.  She shows will take place at Copeland Theater, 7714 Ann Arbor St. in Dexter. The show is directed by Deric Prieskorn and co-directed by Joy Gee. Tickets are $10 and can be purchased HERE

Written By
Terry Jacoby
More from Terry Jacoby
Paula Palmer Burns talks with pride about the past, confidence about the...
Read More