When trying to describe the world-premiere of Jeff Daniels’ “Roadsigns,” Purple Rose Theatre Director Guy Sanville kept returning to the same word. “It’s just beautiful; and I like beautiful. Beauty matters. And it’s great when you can all agree on what’s beautiful.”

Audiences so far have all agreed that “Roadsigns” is just that – beautiful.

The lyrical new play by Daniels follows Lanny, a young poet, as he embarks on a journey to find himself. What the audience will discover is a special appreciation and connection to not only the journey but the characters.

And speaking of special connections, the play reunites Daniels, the playwright, with Sanville, the director. The two have been a collaborative dynamic duo at the Purple Rose for over two decades. Sanville, who recently celebrated his 20th anniversary as artistic director of the Purple Rose, has directed over 50 plays for the PRTC, including 39 world premieres.

Many of those world premieres have been penned by Daniels, who founded the Purple Rose in 1991. Sanville says Daniels has turned himself into a “world-class” playwright.

“People write plays for a variety of reasons and he’s written plays for all of them,” says Sanville, taking a break earlier this month during rehearsals for Daniels’ latest, “Roadsigns.”

Some of his best work comes from something he’s really mad about or from the heart. He always writes from the heart and that takes a lot of courage. He’s actually gotten more skilled at storytelling and writing and saying what he wants to say.

Sanville isn’t rushing through his descriptions of Daniels’ strengths and writing style like he’s reading them off a script. His pauses are long, and he’s choosing his words carefully. There is thought and feeling into what he wants to say about a man who is a lot of things to him including boss, mentor, artistic companion and friend.

“There are lines in this play that just ring so beautifully,” Sanville says after one of those pauses. “He’s gotten more poetic. There is more poetry and rhythm in his writing and his work.”

Daniels certainly can make people think. He can inspire and ignite things in people. He can help them see a different point of view or allow them to see things in themselves or people they know through his characters and stories. And, when he chooses to, he can make people laugh like he did in the fall of 2018 with “Diva Royale,” a spectacular farce, or other outstanding comedies such as “Escanaba in da Moonlight,” “The Tropical Pickle” and “Norma & Wanda.”

“The hardest thing to do is be funny,” Sanville says. “A good, well-crafted comedy is hard to do.”

And what has Daniels accomplished with “Roadsigns,” a nostalgic tale filled with rich characters dwelling on the outskirts of life, each following a dream or hoping to bump into one?

“Everybody in this play has lost so much and they still have a dream, and that’s as heroic as it gets,” says Sanville. “The story just kind of swirls and you just get wrapped up into it and it’s beautiful and heartbreaking and funny.” 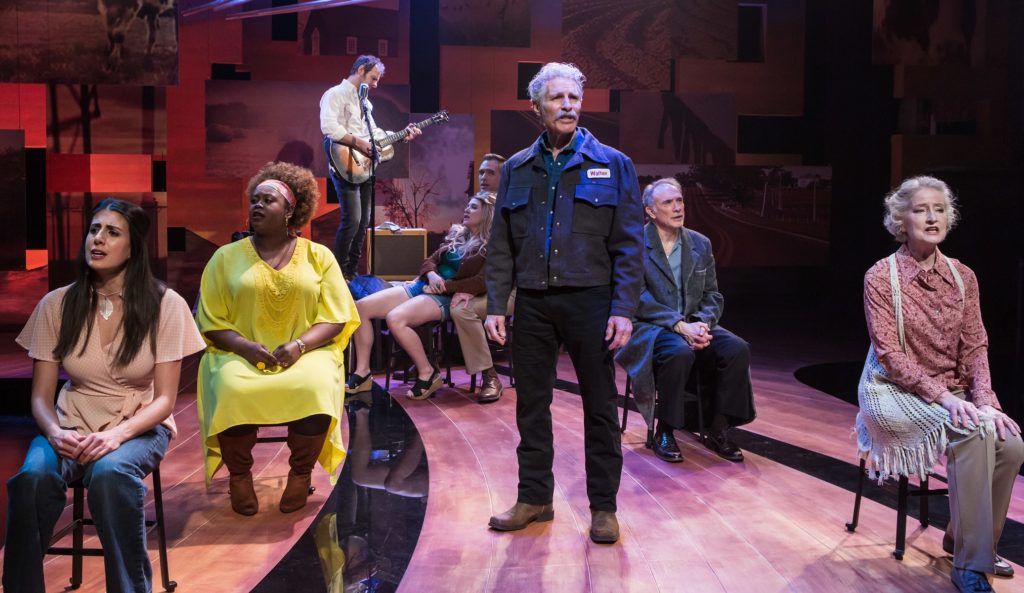 “People who do this work are smart and fairly progressive and are horrified by what we are becoming as a people and as a country and they want to use their art to bring awareness to some of these issues and talk about these things,” he says.

Sanville says art uses both sides of a story with equal force and clarity and either somebody changes or somebody doesn’t.

“If you change, you have a comedy; if you don’t, you have a tragedy,” he says with a smile. “It should never be easy. This play doesn’t have a linear structure; it’s a circular structure. Here, the end justifies the means and you feel completed by the end. And that’s different than what we usually do.”

The process between Sanville, the artistic director, and Daniels, the writer, follows a fairly common path the two have developed over time. “He will write a couple of drafts and then send it to me,” Sanville says. “I will look at it and then we meet. About this time last year he gave me the draft and we talked about it.”

Then Sanville got on a plane.

“I went to New York and spent three days with him talking about the script,” he says. “I actually had him read the entire play out loud to me. He read every character and played every song. A couple of drafts after that we got the rehearsal draft.” 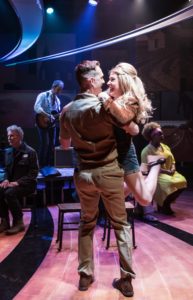 And Sanville is excited to see Roadsigns get on the road.

“We have such a great cast,” he says. “It’s a dream cast, it really is. We have a really good team here. I like the scale of this show. It’s a bigger show than we usually do here. And it’s going to look deceptively simple, but it’s not easy. And everyone in this show are really good singers and really good actors and really good people.”

At the Purple Rose, everyone works for the playwright, regardless of who it is. For “Roadsigns,” the direction was a team effort, all working for the playwright. “We really have three directors on this play,” Sanville says. “Rhiannon Ragland is doing the choreography and Angie Kane is the musical director and did a lot of the arrangements.”

“Roadsigns” is not a musical, but it’s a play with music – and the music is not only a perfect companion but adds a beautiful touch to a beautiful story.

The music for “Roadsigns” was written by Jeff and his son, Ben. “Jeff’s son (Ben) has written a couple of songs, during rehearsals. He’s very prolific and he’s a wonderful poet and very talented,” Sanville said. “I just gave him a line to go off of and six hours later I got a song in the mail.”

Sanville says his boss, mentor, artistic collaborator and friend is excited about “Roadsigns.”

“You want the playwright to be happy and it’s been a long time since I’ve seen him this excited about something that he wrote,” Sanville says. “This is a really special show. It’s just beautiful. You really feel like you get to know these people.

“The actors are amazing. It’s rare to see eight people who are that incredible in the same thing. They are extraordinary and it’s something to see.”

And it all starts with the playwright.

“This is really good story telling and there is no clear winner or loser here,” Sanville says. “Jeff is really, really smart. And he’s always got five or six ideas going.

“He’s great to work with and he’s interested in what his work inspires in other people. And that’s a great thing for a playwright to think.”

All performances will be held at The Purple Rose Theatre Company, 137 Park Street, Chelsea, Michigan 48118.   Ticket prices range from $23 to $47 with special discounts for students, seniors, teachers, members of the military and groups (12+). For more information or to make reservations call (734) 433-7673 or go to www.purplerosetheatre.org.

Roadsigns at the Purple Rose – through March 14