The first Dexter Board of Education meeting of 2020 was also the last for Board President Michael Wendorf, as he announced his resignation from his position and the BOE in advance of his family’s relocation to California.  Wendorf’s resignation will be effective as of Jan. 31, 2020 and his voice caught as he expressed appreciation for the community’s confidence and trust in him saying, “it has been a privilege and an honor to serve on the Board as President.”

Having served on the BOE for the past 15 years, Wendorf shared that he has enjoyed working with Supt. Dr. Chris Timmis and the previous superintendents, as well as the many children and families he’s had the opportunity to meet in his role.

Applause filled the room following Wendorf’s comments after which Dr. Timmis thanked Wendorf for his service, turning to Dexter Education Association (DEA) Representative, Jessica Baese, to present a token of appreciation on behalf of the District.  Baese announced that the DEA has donated books inscribed with a commemoration of Wendorf’s service to each school building library.  Timmis also presented him with a wall plaque recognizing his tenure as a Dexter BOE member. 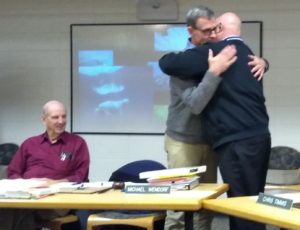 During the public participation segment of the meeting, former DCS teacher Jim McCarger stood to address President Wendorf personally, saying Wendorf has his undying respect. “You have been an advocate for the students, for quality education, for teamwork on the BOE and the community.  I have been absolutely honored to converse with you on District issues, and there will be a huge vacuum when you leave.”

After completion of the evening’s agenda, the meeting ended with several Board members adding their personal thanks for Wendorf’s leadership.  Trustee Barbara Read was the first to speak up to thank him for ,“the remarkable way you’ve organized and run the meetings, and looked out for kids.”

Board Treasurer Dick Lundy joked, “I’ve never regretted inviting you to join the Finance Committee.”  He then added that Wendorf has, “done a wonderful job and will be missed.  Your priorities and dedication are outstanding.”

President Wendorf ended his last meeting with appreciation for all the kind words on his behalf: “I have always felt the energy of our teachers, administrators and kids, and feel that I’ve always gotten more than I gave.”