For Dexter wrestling coach Matt Chisolm, this year is special. And not just because his team is off to a great start. It’s much more than that.

Chisolm is in his fourth year as the head coach of the varsity team but has been involved with the program for 21 years, including 10 years with the club team and five years with the middle school before moving over to the high school.

Last week, during Senior Night, you could see the emotion on Chisolm’s face.

“These seniors I started working with in seventh grade when I was at the middle school,” he said. “Then I moved over to the high school team when they were freshman. So this is my fourth year in a row with these guys so Senior Night was a very special night for me. It’s just a special group of kids.” 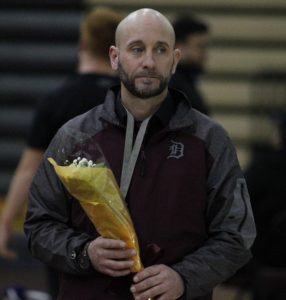 And a good group of wrestlers, as they are proving this season.

“It all starts with the club and the feeder program,” Chisolm said. “And if the club is having a bad year you can pretty much guarantee that in five years we are going to have a bad year. It’s just how it works. So it’s important to have that strong feeder program.”

Chisolm also credits the school’s improved strength and conditioning program. And a few of his wrestlers even played football this past year and that helped get them stronger and in better shape for wrestling.

“We have such a good group who work hard and it’s a nice mix of experienced wrestlers and young kids,” he said. “We are doing well so far. We have to keep working hard.”