Dylan Lorincz started wrestling in third grade after basketball didn’t exactly work out – let’s just say it wasn’t his sport. “I was playing basketball and I got into a fight and my friend said that I should wrestle,” he said laughing. “My mom thought I was too short for basketball anyway and wrestling just seemed like a better fit for me.”

It’s turned out to be a perfect fit.

When Lorincz walked out of the gym at Howell High School on Dec. 14, he had a medal in one hand and a milestone in the other. The Dexter senior wrestler entered the championship match at 130 pounds in the Herm Wilkerson Wrestling Invitational looking to pin down first place for the Dreadnaughts. He did that and then some.

Lorincz finished first overall at 130 pounds, and in the process, won his 100th career match for Dexter. It was a big day!

“I was locked in that day but it was looming over me because I knew I could get my 100th win that day,” said Lorincz, taking a break in between matches last week at Dexter. “I didn’t want it to be something that dragged on so when I got it there was a little bit of relief.” 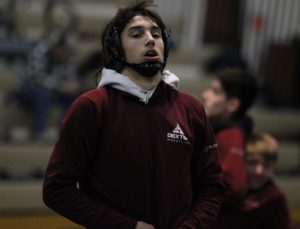 Lorincz doesn’t show his opponents very much relief. He is one of those wrestlers who is relentless and driven and competes to the final buzzer.

And for proof we head back to Howell where it was 3-3 in that championship match against Hartland’s 130-pounder.

“He was pretty tough,” Lorincz said. “I got an escape right away and then we were in neutral for almost the entire match and with about 15 seconds to go I got a take down.”

And he took down the top prize.

Lorincz was 25-17 as a freshman and “about the same” as a sophomore. He won a few more matches last year as a junior and has become even better as a senior. He credits hard work for his success.

“I’ve learned how to actually work hard,” he says. “As a freshman I thought I was working hard but there is such a big difference in what I do now to prepare compared to my freshman year. My mindset is totally different. I work not only harder but smarter.”

And wrestling is one of those sports where you’re either all in or not at all. It’s demanding and only the strong flourish because of dedication and hard work.

“Starting at a young age like I did and working your way up you realize all of the different pieces that go into it,” Lorincz said. “There is technique and work ethic and then having to do things like cut weight isn’t easy.” 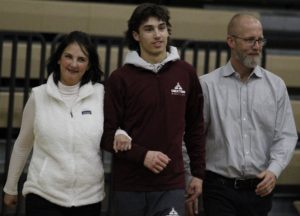 The Dexter team is off to an impressive start and is enjoying one of the program’s better seasons in years. Lorincz, who is proud to be one of the team’s captains and is currently ranked 11th in the state at 130 pounds, has big goals this season including winning the SEC Tournament and placing at the state tournament.

“We are hosting Districts this year and our team goal is to first win that,” he said. “We also would like to get top two or three in a couple team tournaments we have this year too.”

A few Division 3 schools have shown interest in the Dexter standout but he’s still weighing his options. And he has options other than just wrestling.

Lorincz was a standout player on Dexter’s lacrosse team which finished first last year in the SEC. “I like the physicality of lacrosse but also the chance to run around and score goals,” he said. “You don’t get to score goals in wrestling.” 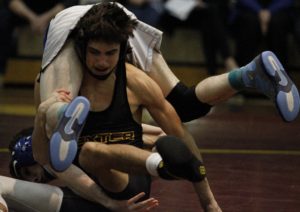 But you do get to mix it up and take people down. Last week against the Pinckney wrestler, who came in ranked third in the state, Lorincz earned the victory to prove that placing in the states is no longshot.

“I first saw him wrestle in seventh grade,” Dexter coach Matt Chisholm said of Lorincz. “He’s really come a long way through a lot of hard work. I think he can place in the state meet. I think it’s really realistic.”

Written By
Terry Jacoby
More from Terry Jacoby
We have a winner. Everyone else can go home. There is nothing...
Read More