The Dexter hockey team is playing well and only getting stronger as the season skates along – just ask that team to the west. The Dreadnaughts scored an impressive 4-1 victory over rival Chelsea on Wednesday at the Arctic Coliseum to improve to 10-3 overall on the season.

Dexter Coach Justin Young is focusing on keeping things on an even keel – don’t over celebrate the highs or dwell on the lows. “We are focusing on being consistent and the end results and not the highs and lows that come during the course of a season,” he said.

Freshman goalie Caleb Kril continues to play well for the Dreadnaughts. He saved 31 of 32 shots in the win over the Bulldogs. Dexter had 29 shots in the game.

After a scoreless first period, Dexter took a 1-0 lead in the second period on a goal by Kyle Burke with assists from Jonathon Roosevelt and Joey Fracassi.

The Dreads took the 1-0 lead into the third period. 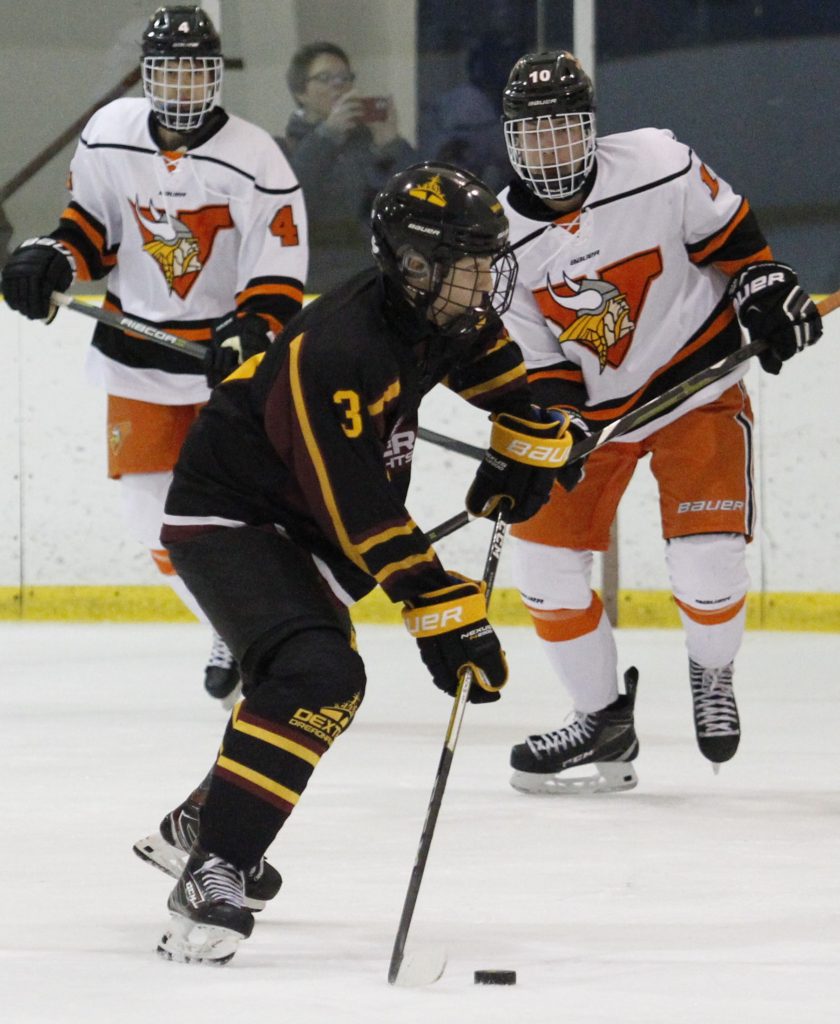 Chelsea tied the game at 1-1 early in the third but Dexter had a quick answer. Less than 30 seconds after the Bulldogs scored, Ryan Kniesteadt scored on the power play to put Dexter right back in front. Fracassi and Brendan Busdeker earned the assists.

With about 7 minutes left in the game, Johnny Poszywak scored to make it 3-1 with an assist from Luc Chesney.

Busdeker added an empty-net, shorthanded goal with assists from Roosevelt and Christian Rapp to put the game on ice.

The Dreadnaughts have a big test on Saturday as they face Pioneer (20th ranked in the state) at the Vets in Ann Arbor. Puck drops at 7 p.m.

“They started a little slow but are really playing well now,” Young said. “It will be a good challenge for us.”

Despite having a young roster – which includes four freshman and six sophomores – the Dreadnaughts found their stride early this season and haven’t looked back.

“The talent is there and so far they have showed a desire to work and we still have a good group of leaders back from last year,” Young said. “They are buying in early this year which is nice. Last year we started 1-4 and had to have a little talk about things but that wasn’t the case this year.”

Dexter is not only talented but deep with the ability to roll out three strong lines against their opponents. Teams don’t get a break against these Dreadnaughts.

“We’ve been fortunate to be getting everyone involved,” Young says. “The freshmen and sophomores are contributing and that makes a big difference.”

Young doesn’t see a clear cut favorite this year in the SEC. The league is tough and teams need to play well every time out if they want to stick one in the win column.

So far, Dexter is sticking most of its games in the win column.