“We haven’t had much look in the past against Adrian so that was a nice win,” said Dexter Coach Matt Chisolm.

The Dexter wrestling team is having a lot of “nice wins” this season including two more on Wednesday night as the Dreadnaughts pinned down Adrian 51-28 and Pinckney 44-26 in an SEC White Division tri-meet before a big crowd at Dexter.

In the first meet against the Maples, only two matches went the distance. Dexter’s Jacob Joyce lost 17-4 at 135 pounds while Dexter’s Noah Drummond won 8-5 at 140 pounds.

Kevin Blanchard had a pin in the second period at 119 for the home team. 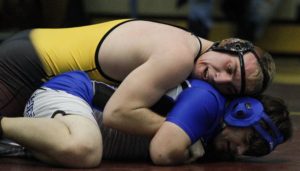 Written By
Terry Jacoby
More from Terry Jacoby
There is nothing cowardly about Camden Markel. The Dexter junior will be...
Read More