Like many Dreadbots, Dexter junior Krystin Nelligan discovered the wonderful world of robotics in middle school.

“I became interested in robotics when I was in the eighth grade,” says Nelligan, whose roles this year include Service-Outreach Sub Team lead and the team’s reporter. “I joined a class about a science topic (I don’t remember which one). During the time in that class we made Sumo Robots and I got instantly sucked in by the topic. I then took the next two quarters (a semester) of the class and learned how to program in many different kinds of code. Thanks to my teacher, I learned how to use a 3D printer, multiple tool machines, and how to write code.”

And like many Dreadbots, when Nelligan discovered robotics, it was not only a game-changer, but a life-changer.

“One part of robotics that I like is that I found many of my friends there,” she says. “When I came to Dexter schools from Ann Arbor schools in ninth grade, I didn’t have many friends, but during the first meeting, I found many nice people looking to find friends just like me and to learn more about robots. I also like the opportunities the team offers from service to learning new things. I found a lot of adults there I could trust also, and it makes the atmosphere comfortable and makes me able to be who I am.”

Who she is, is someone positive, confident and eager to learn. Her past duties with Dexter’s elite Dreadbots include being on the Mechanical Sub Team and the Service-Outreach Sub Team. “My first two years, being on the mechanical team was about learning how to build a great robot, and how to use the power tools. The Service-Outreach team hasn’t been too much of hands on activity other than attending the service and outreach events.” 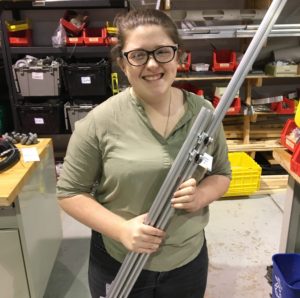 “One of the minor goals we are reaching to achieve is the Chairman’s Award, which is the most prestigious award in FIRST and is awarded to the team that is a role model to other teams,” she says. “One of the duties that we take care of is planning the service events. We (Mrs. Lindskov and I) don’t want to take up too much of the student Dreadbot’s time, so we try to find a median of service and leisure. Because after all, we are still high school students, loaded with homework, looking to enjoy ourselves by hanging out with our friends and building robots.”

Nelligan helps organize the charities they want to contact. “This year the sub team will be different from the previous years,” she says. “We are looking to teach the other students how to contact charities and to be more involved in this process.”

The role as a reporter is to come up with new article ideas with the Dreadbot mentor who is the head editor, Dr. James Sprague. Then once the idea is approved, then the writing and gathering information portion begins. After the article is approved by at least two of the six selected Dreadbot mentors, Nelligan is in charge of emailing the article to selected news outlets.

Among Nelligan’s many Dreadbots highlights was attending the World Championship in Detroit the past two years.

“It is amazing to see our robot compete with many people from around the globe, to see the teamwork within the other teams, and to see the different brilliant designs of the other robots,” she says. “It is amazing to meet so many people and become friends with them. Even though we may not make it very far in the world championship, it is fun to support the other teams that we know and have made many friendships with.

“Another highlight has been working on the journalism side of the team. I remember the first article I wrote. I was so excited to write it, and to get interviews from my friends on the team. It has been an amazing experience and I have learned a lot from it.”

This year’s goals include another trip to the World Championship and “to do our very best.”

“I would like the new Dreadbots to learn as much as they can and not be afraid to talk to the judges,” she says. “One of the goals I really hope goes as planned is that we at least win one of the District Chairman’s Award. It would be amazing and would encourage the students even more to help the community and those less fortunate. We also want to win at least one district competition, and to make new friends along the way.”

Krystin, 16, is the daughter of Larry and Theresa Nelligan. She also has found another love in music. She plays the French Horn and Mellophone in the band and also is in the Dexter in the Jazz Band. She’s still trying to figure out what to do after Dexter High School.

“I currently have no idea on what college I want to go to, or what major I want to pursue,” she says. “Journalism and engineering are interests of mine, but I am leaning toward a more public speaking angle of a career.”

Written By
Terry Jacoby
More from Terry Jacoby
Gracie Burns was beaming. She was floating around the turf after her...
Read More