Winning a championship evokes different emotions in different people. And when Dexter won its first ever Division 1 field hockey state title back in November, emotions ran high as the Dreadnaughts raced onto the field after defeating Pioneer in the championship game.

Sam Skinner was one of those Dreadnaughts running onto the field. But she wasn’t running at full speed because she hasn’t been able to do that all season. What she has been able to do is not only play the game she loves for the team she loves, but also to contribute and inspire and demonstrate the true definition of competitive spirit, will and determination.

And when the realization of what this young field hockey player had accomplished during her senior year, the emotions could be seen in her eyes and felt in everyone’s heart, especially for those who knew the back story.

And sometimes the back story leads to the front page, and the headline here is about a young woman who was willing to sacrifice, play through pain and in the end be rewarded for her efforts with her teammates, friends and family on a rainy afternoon in Chelsea.

“This situation has not been ideal but it has taught me about dealing with adversity and how to grow from it rather than get pushed down by it,” says Skinner, who talks as eloquently and sincere as well as she handles a field hockey stick. “While it’s a tough story, it’s not something I ever wanted pity from. I’m very thankful that I was able to play.”

Skinner, the daughter of Brad and Michelle Skinner, has had issues with her hip since she was in sixth grade. Dealing with the pain from playing field hockey became just part of the game for her. But her condition only got worse, and following her sophomore year of field hockey something had to be done to help ease the pain.

“It was determined that I had hip impingement and that caused my labrum to tear,” says Skinner, who had surgery to repair the labrum and fix the impingement in April 2018. “The plan was to have it done and make it back for the end of the field hockey season in late October. But the recovery didn’t go as planned and I never was able to get back on the field that year. It was tough, but motivated me to work harder and make sure I was able to play my senior year.”

Doctors informed Skinner that a second surgery was needed. The timeline, however, would prevent her from playing her senior season of field hockey. “They wanted to do it in April, but because of the six-to-nine month recovery for the surgery, I wouldn’t be able to play again. So for me it was a no-brainer.

“I decided to play through the pain.” 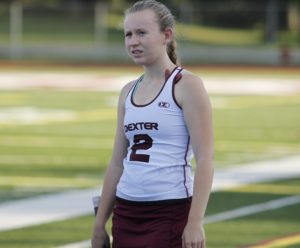 Skinner, who had the full support of her parents, coaches, and teammates, admits it wasn’t always easy. “It was pretty difficult and painful to play, not trying to make it sound easier than it was,” she says. “I had to work extra hard during conditioning and practice to keep up because things weren’t the same and having the bad hip I couldn’t always keep up with the rest of the team.”

The recovery from the first surgery didn’t go as planned so Skinner didn’t even start running again until field hockey started in August. “I had to relearn how to play and move with the new way my body worked and make adjustments to my game because things weren’t the same as they were pre-surgery,” she says. “However, I’m forever thankful that I got to play and have the final season we did, definitely worth everything.”

Skinner says she would be lying if she said she never doubted her decision.

“It was a tough season but to get to play again was the best feeling in the world,” she says. “My coaches and teammates are the reason I played the season I did. If it wasn’t for their support, patience and the relationships we have built from the years of playing together, I think I would have maybe tapped out.”

Instead, she tapped out as a state champion – celebrating in Chelsea with her teammates. And that’s when all the emotions of what she had accomplished began to surface.

After that win a lot of things hit me,” she says. “The first one was shock that we had won the state championship and all the hours of hard work had paid off. But also standing there hugging the team, I realized it was my last time celebrating a win like this, wearing the Dexter jersey and that made me sad. But that was brief because the win was far better. The team worked very hard this season to make that happen and it wasn’t an easy task. I’m very proud of Team X and all we accomplished. I’m thankful I was able to play with them and be a part of the history we made. 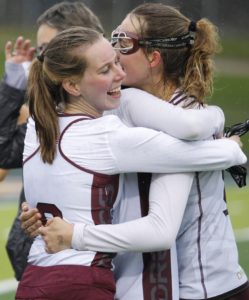 Skinner says her goal for the season was to play with her heart and regret nothing. “I wanted to just play as much as my hip would allow and push through when it got tough and finish the season out,” she said. “My goal for the team was to win states by putting in hard work and earning it.”

Her teammates and coaches were glad she decided to play – and contribute more than she probably will ever realize. “She has overcome setbacks and frustration and came back with grit and determination to play her senior season despite needing another surgery,” said Dexter Coach Trish Machemer. “She played every practice and game with pain, but never complained and never put the focus on herself. She comes from a family of coaches and athletes, and how she has handled her adversity is admirable and inspiring.”

Skinner plans on studying nutrition and exercise science in college and then going to physician assistant school and pursue a career as a PA in orthopedic surgery. Unfortunately, because of her second surgery, playing field hockey at the next level isn’t really an option. However, she hopes to play sports in college at the club level because she loves the competition and team environment.

It’s that team environment and support and encouragement that kept her going this past season. 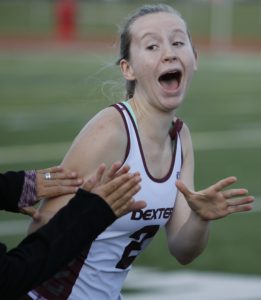 “This definitely isn’t something I could have done alone,” she says. “My coaches have always been such caring and supportive people with everything that has happened with my hip in the past year and a half.  They have supported me, helped me and did more than they had to in helping me make this last season possible. And my teammates are the best. They always were patient when things got hard because injuries are very frustrating. They have always supported me and made me feel like an important part of the team even when I was the cheerleader last year. And I truly appreciate that.”

She also appreciates what it means to accomplish your goals and win it all! “We had a very special team this year and I’m so happy our accomplishments show that,” she says. “Hopefully, we will be a role model to the future of what Dexter field hockey can accomplish.”

Sam Skinner, who had a successful second surgery last month, accomplished her goal. She played with her heart and regretted nothing. She leaves behind many positive accomplishments and traits for others to emulate. “Role model” might just be at the top of the list.