There is snow on the ground, a chill definitely in the air and we’ve flipped the calendar to 2020. Many of us have already forgotten and moved on from events in the previous year, but one particular event lingers in the head, heart and soul of Dexter QB Colin Parachek.

The good ones have long memories. They don’t forget. The great ones remember for a reason – so they don’t have to go through it again. They make adjustments. Work harder. Prepare better and build better memories.

And Colin Parachek is a great one. He already has to be on the Mt. Rushmore of Dexter High School football for what he has done on the field and the attention he’s getting off the field. He is clearly a Division 1 college football player and that alone is special.

Right now Parachek is focusing all of his attention on basketball. But he admits he hasn’t totally forgotten the Churchill game and hasn’t totally checked out of football. 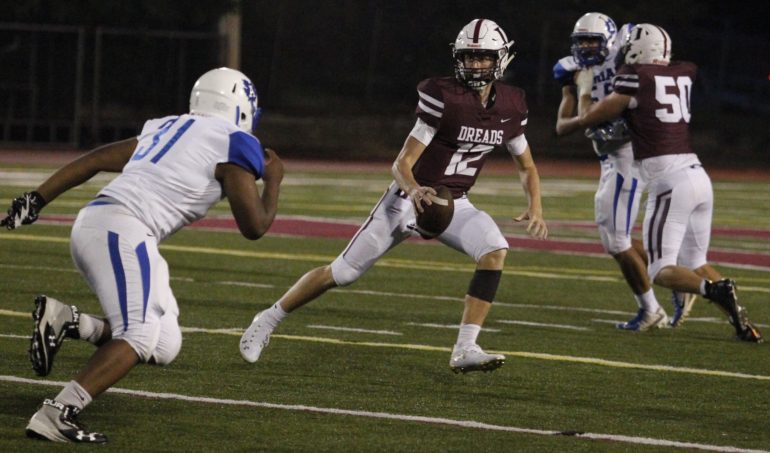 “It was definitely a tough one,” he says of the 41-39 loss to Churchill in a Pre-District game at Dexter back in early November. “It was a close game and one we felt like we should have come away with. But in the end, we didn’t. I thought we played really hard for four quarters. It came down to a two-point conversion that we didn’t execute on.”

But as time has passed, the bigger picture has come more into focus. Not converting a two-point conversion shouldn’t define a whole season and a whole year of preparing for that whole season.

The Dreadnaughts went 8-2 and for the first time in school history hosted a playoff game. They finished the regular season with 330 points of offense while the defense allowed just 130 points (Pinckney was second in the division for most points scored, 92 points less than the Dreads).

“As frustrating as the loss was, it was a great season for us,” Parachek proudly says. “We went 8-2, broke some records and scored a lot of points so it was a very successful year for the whole program. I was really proud of everyone.”

As for that offense?

“We had a lot of weapons this year and it all started with the big boys up front,” Parachek said. “Whether it was pass blocking or run blocking they created the lanes to run and the time for me to throw whenever I needed it. We had great success running the ball and that really opened up the passing game for us. And the fact that we had so many great receivers we didn’t have to force it to one guy. We could go to any number of guys on every play and spread the ball around.”

Parachek was coming off an outstanding sophomore season, one that not only helped take Dexter to the postseason for the first time in school history, but one that saw his name being considered among the top quarterbacks in the state. Great performances and accomplishments adds up to great opportunities, and Parachek came into his junior year looking to create even greater things – for his team first, and also himself. 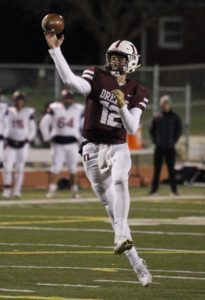 “My increased knowledge of the game and the experience I had the year before really helped the game slow down for me,” he said of this past season. “I was able to make reads much easier than I was the year before. I was able to read the defenses and know who was going to be open at pre-snap based on what kind of coverage the defense was in. It allowed me to think less when the ball was snapped and just use my skills to get the ball where it needed to go.”

While he’s not done, Parachek does have an appreciation for history and what this group of players has accomplished over the past two seasons. Dexter football was never a laughingstock – the players and coaches that came before always gave a great effort even if the results didn’t show up on the scoreboard – but the program struggled to find a winning identity. That has all changed under coach Phil Jacobs, his staff and of course the players.

“We were pleased to go 6-4 and make the playoffs (his sophomore season), but that was not enough for us,” Parachek said. “We were never satisfied and went into the off-season determined to do better. And even though we went 8-2 and it’s one of the best records in Dexter football history, it’s still not enough. We still haven’t accomplished what we want and we have to go back in the weight room, work harder and go even further.”

And that is how you build a program. One class passes that “never satisfied” approach down to the next one and right on down the line. That’s what this group is creating in Dexter.

Even though he is only a junior, Parachek has begun making the rounds to find that perfect fit for college. Stops have included Michigan State and Western Michigan.

“I’m just testing the waters right now when it comes to college,” he said. “This off-season will be really important for that as far as who is interested in me and where I might be a good fit.” 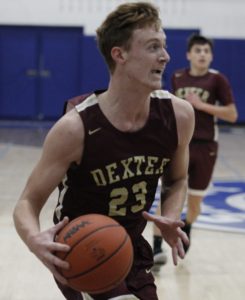 Parachek is dribbling in a different direction these days. Not only is he an outstanding quarterback, but Parachek is a solid basketball player and the Dreadnaughts are off to an impressive start under first-year varsity coach Jason Rushton.

Dexter is 4-1 in hoops and the season resumes on Friday at Pioneer HS.

“Everyone is working together which is really important in basketball, and we feel like we have a really strong team,” Parachek said. “Coach Rushton is awesome. His knowledge of the game is insane. He really cares about us and he’s the type of coach you want to work hard for because he cares so much.”

Like he did in football, Colin gets a chance to play with his “kid” brother Brennan on the varsity basketball team. It’s a thrill – and opportunity – he isn’t taking for granted.

“It was awesome getting to play with him in football and I thought he had a really good year especially for being a freshman,” Colin said. “It’s really a dream come true. And we both realized it when I threw that first TD pass to him against Chelsea that this really was happening. It’s a cool experience and not one many get to experience.”