Mason High School came alive with the hustle and bustle of 48 First Lego League (FLL) teams, plus family and friends, flowing into its gym on Sunday, Dec. 8. One of the 48 teams was Dexter’s very own team, the Redbots. The Redbots were one of the three FLL teams from Dexter, collectively known as the Dexbots.  Seven boys, 4th-6th grade, made up the team. The Redbots was one of the three  FLL teams that started in September under the DROID (Dreadbot Robotics Opportunities in Dexter) program.

During the Milan qualification event on Nov. 16, the Redbots earned the second highest score with 295 points and won the fourth-seeded position in the FLL State Championship event at Mason High School.

At the Mason State Championships event, the Redbots team members had three judging events (project, core values, and robot) and participated in four robot matches.  The teams worked hard during the competition, using practice mats to tweak any robot issues. Each team was looking to achieve their highest match score, as only that score would count for rankings.  All day long, people were watching the screen eagerly, waiting to see their team’s ranking.

During the core values judging section, each team was asked to build something that represented their team out of a pile of Legos.  Without speaking a word to each other, the five Redbots team members present each built a red ant – their team mascot. 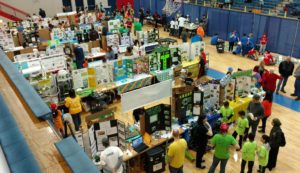 At lunch the Redbots were ranked 39 out of 48 with a high score of 220, while The Hoverheads out of Ann Arbor Christian School held the lead with a top score of 540.

Dextbots’ three FLL teams were mentored by Blair and Becky Reamy.  When asked why she mentors FLL, Becky responded, “It’s fun watching the kids learn.  I am a programmer by profession and at heart, so it is awesome to share my love [of programming] with the kids.”

Blair had a list of four items when he was asked what FLL teaches kids: “teamwork, programming, sportsmanship, and problem solving.”

Carmen Crawford and Wenonah Robelen were the original coaches of the Redbots, but both were thrilled when Carmen’s husband Rob joined the ranks and took on the job of teaching the boys how to program.

Carmen said she, “…liked how the students worked together to solve issues after a bad run with the bot.”  As the team struggled at Championships, she got to see them do lots of teamwork and bonding while working on the robot.

What did the Redbots team members like most about their first FLL season?  Teamwork!  Each of the six students present agreed; the seven team member, Collin Bell, was missed during the competition. “Working with a team. I learned that lots of people have lots of different ideas,” stated Ty Cottrell.

Eli’s brother Jackson Crawford joined the chorus, saying that he enjoyed  “…getting to work together and cooperate with others.”

FLL includes education, fun, and memories – what a great trio!  When asked what his favorite part of FLL was, Dave Robelen quickly answered, “Being able to program and research things I never thought of before.” Like some of the other FLL team members, Dave has an older sibling involved in the high school Dreadbots FIRST Robotics program.

When asked about their favorite memories, Jason Biggs replied, “When we made it to States,” and Joel Waters responded with, “Today, when all of us were working together to program the bot.”

Jason’s dad Todd Biggs said, “I especially liked the way that the boys worked together to reach their goal of making it to the state competition.  It was nice to see them learn to deal with their failures and to show pride with their accomplishments.”

Stephanie Cottrell, Ty’s mom, added, “I like FLL because he learns to be on a team, because he doesn’t do sports. He learns how to work together with others to solve real world problems.”

When asked what FLL had taught her son Joel this year, Jenny Knapp replied, “To play as a team.  Time management.”

The Redbots final scores were 220, 215, 225, and 155.  They ended States Championship ranked 42.  Though not the scores and ranking they were after, this rookie team took things in stride and all were grateful to have the opportunity to compete at the second level of FLL competitions. Each student received a medal for being at the championship, which they wore proudly.  In the end, the Hoverheads won the State Championships at Mason High school with a top score of 570 and will be going to the FIRST World Championships in Detroit this April.

Dexter’s DROID program would love to help support the FLL program again next year. The current mentors and coaches are talking about starting next July.  The existing FLL teams are looking to replace three coaches that won’t be back next year, as two are moving up to help with FTC (FIRST Tech Challenge) for 7-8th grade students, and one coach has returned to college.  If you would are interested in coaching, please contact the Community Ed office or Shari Lindskov, DRIOD leader, HERE.  No engineering background is required, and last year’s coaches will teach you.