Field hockey changed Claire Vaughn’s life forever. And it all started with an email.

“(Current Dexter HS coach) Keely Tamer sent my parents an email when I was in fifth grade, asking if I wanted to participate in a 3v3 tournament they were holding,” she explained. “I ended up going and loved it ever since.”

Loved it, excelled at it, dominated it and won at it – as in the Division 1 High School State Championship. Vaughn, a senior at Dexter HS and a key member of the Dreadnaughts’ winning team, has turned that email into a passion that has not only seen her play at the highest level but also helped set her on an incredible path to success.

Her skills in field hockey – along with her excellence in the classroom – helped Vaughn land in the Ivy League.

“I picked Cornell because academically it would challenge me and athletically the competition level seemed like a good fit,” says Vaughn, who will be majoring in Government.”

And like she has done her whole young life, Vaughn will set her goals high. 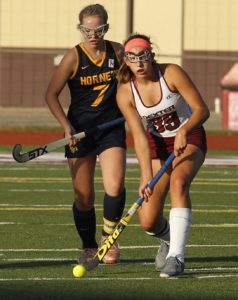 “At Cornell, I hope to help the team win the Ivy League,” she says. “Additionally, I also have personal goals of achieving All Ivy awards and recognitions.

“After college, I hope to continue coaching field hockey at the club or high school level. One day I might coach my own kids in field hockey, but that’s a long ways away.”

Claire, the daughter of Keith and Leigh Vaughn, has a 3.87 GPA, is a member of the National Honor Society, Student Council and also plays lacrosse.

She said she liked the fast pace of field hockey the first time she stepped on the field.

“Field hockey was non-stop,” she said. “In basketball and soccer, which I had been playing before field hockey, every whistle you had to pause and wait for the girl to inbound or throw the ball in.  In field hockey, you can just take the ball and go.”

“Take the ball and go” is exactly what Vaughn did. She plays club year round with Pinnacle Field Hockey and has enjoyed the opportunity to travel across the country and compete against a variety of players. 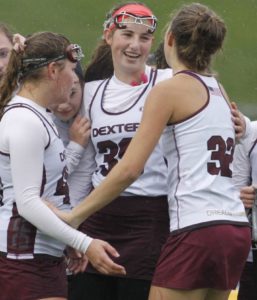 “We compete in several national tournaments each year, including participating in the National Club Championships,” she says. “With the club team, we  practice both indoors and outdoors as well as attend a variety of tournaments.”

Heading into her final season with Dexter there were some big goals including the biggest – win it all!

“As a team, we wanted to win States, the SEC, and the regular season, as well as beat Pioneer (our goal every year),” she said. “We placed an emphasis on hard practices every day and having a strong bond between teammates.”

Dexter accomplished all of their goals including a double-dip by beating Pioneer in the State Finals. “It felt surreal,” Vaughn said of winning states. “After coming so close the years before it felt amazing to finally win the last game and claim our first Division 1 state championship.”

She said all that hard work in practice was the key to their ultimate success. 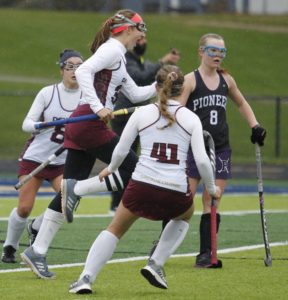 “What helped us a lot this year was how hard we worked at practice,” she said. “Every day we showed up to practice with something that we needed to improve on to take us to the next level. Also, the team dynamic this year was great. Everyone on the team genuinely enjoyed coming to practice and being around all the girls on the team.”

“In general, there is a strong group of coaches from early ages up to the high school level that have a passion for growing the game of field hockey in Dexter,” she said. “Ryan Maki is also introducing field hockey to kids in P.E. class which is exposing young kids to the sport.”

Vaughn was introduced to the sport with an email. The reply turned out to be pretty positive.