As the director gets a play on its feet and the actors get to know their roles and the lights begin to shine, the magic truly begins to happen on and off the stage. And Director Michelle Mountain really enjoyed those special moments getting the Purple Rose’s production of “Sherlock Holmes and the Adventure of the Fallen Soufflé” on its feet.

“One of the actors had an epiphany and said he was being held up by what he was doing last time,” says Mountain, who was the assistant director on “Sherlock Holmes and the Adventure of the Elusive Ear,” part one of David MacGregor’s brilliant trilogy. “Yeah, time has passed. You’re a different guy. Just experiencing the joy in all those discoveries is really fun.”

NOTE: “Sherlock Holmes and the Adventure of the Fallen Soufflé” (now playing through Dec. 21) stands on its own – you didn’t need to see the first “course” to enjoy your soufflé. 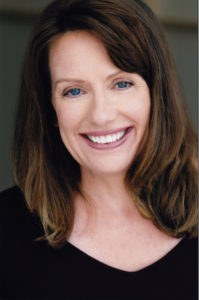 Mountain and her family moved to Michigan in 1994 from Seattle and she started working at the Purple Rose in 1996. She has been a Purple Rose Resident Artist since 1998.

The Purple Rose Theatre has long been the standard for excellence in the Midwest and it all started as soon as the doors opened, thanks in part to the vision and dedication of its founder Jeff Daniels. The world-renowned actor has premiered 16 full-length plays at the PRTC over the past 25 years in his hometown of Chelsea.

Behind the Curtain at The Purple Rose

Guy Sanville has been another reason for the theatre’s incredible reputation for quality and professionalism. He celebrated his 20th anniversary as Artistic Director last May and has directed over 50 plays for the PRTC, including 39 world premieres.

Mountain, whose current roles with Purple Rose includes apprentice chief, literary manager and director of educational programming has been the director on numerous plays including “The Last Romance,” “On Golden Pond,” and “Growing Pretty.” Her directorial debut came in 2002 with “Hope for Corky.”

Sanville says Mountain is “the best teacher I know.”

“She is the gold standard for actors and professionalism here at the Purple Rose,” Sanville says. “Her talent, work ethic, commitment to her work and our mission, inspire everyone around her daily. We are fortunate she has made the Purple Rose her creative home.”

A lot has changed for Mountain and the theatre since she first walked through those purple doors in 1996. And because of Daniels and Sanville, the quality was already pretty high up on the mountain to begin with.

And “there” is where that magic happens. Where excellence becomes standard. And where one “experiences the joy in all those discoveries.”

“We just work together really well and we take care of each other,” Mountain says. “It can be challenging to teach new people how we do things here because it’s different and what we expect is different than almost anywhere else.”

Mountain is really excited about “Sherlock Holmes and the Adventure of the Fallen Soufflé.” “People will laugh and there are a lot of nice surprises,” she says. “It’s simply a beautiful show. It moves really well and it’s smart. It’s a lot of fun.”

Ticket Information: “Sherlock Holmes and the Adventure of the Fallen Soufflé”

All performances will be held at The Purple Rose Theatre Company, 137 Park Street, Chelsea, Michigan 48118.

Ticket prices range from $23 to $47 with special discounts for students, seniors, teachers, members of the military and groups (12+). For more information or to make reservations call (734) 433-7673 or go to the Purple Rose Theatre  SITE

About The Purple Rose Theatre Company

Founded in 1991 by actor, playwright, musician and Chelsea native Jeff Daniels, the Purple Rose Theatre Company is a creative home for original American plays. In the 168-seat theatre, patrons experience an intimate encounter with live theatre.

The PRTC also provides an apprenticeship program, performance classes, readings, lectures and tours. It commissions new work from established and early-career playwrights. As a 501(c)(3) not-for-profit professional theatre, the PRTC operates under a Small Professional Theatre agreement with the Actors’ Equity Association.