If you have never been to a cross country state finals at Michigan International Speedway, you are missing out on one of the more amazing and exciting events during the entire high school sports season.

There is as much racing off the course as there is on the course as coaches, family members, teammates and supporters try to get to various spots along the trek to cheer on their runners. It’s easily one of the pinnacle events every year in high schools sports.

People also are very friendly and encouraging and supportive – it’s a festive atmosphere even if the weather isn’t the best. On Saturday at MIS, it was chilly and the skies threatened all day, but the rain – and snow – held off except for a 30 second hail storm.

People also are very chatty. While waiting for the Division 1 girls’ race, a group of fans were talking about the upcoming race. Someone brought up the name of Zofia Dudek, Pioneer’s outstanding distance runner. A woman said, “She’s good but she isn’t even seeded first so I don’t know if she has a shot.” 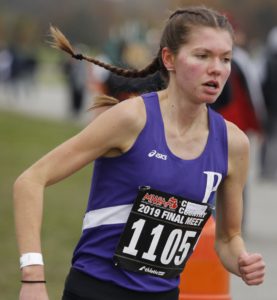 Picking Zofia to win it all was probably one of the easiest predictions of the day at an event that really is oftentimes tough to predict. Still, it was hard not to be amazed, impressed and shocked to see this young lady make that final turn and head down the home stretch. Where was everyone else? This was the State Finals! And she is this far ahead of the field?

Her time of 17:00.4 was incredible, considering the course was pretty beat up at spots by the time the D-1 girls ran their race. And what would her time have been had she been pushed by another runner or two? Still, it was the fourth fastest women’s time in history at MIS.

While she was obviously proud of her place and time, Zofia was more pleased that her Pioneer team finished first overall. The Pioneers have been very close over the three previous years, including runner-up twice.

Pioneer Coach Nancy Boudreau said winning was more of a relief than anything else. “I think when you are the favorite there is a little more disappointment if you don’t win,” she said. “People expect you to win when you are seeded first.

Everyone was thrilled that we did what was expected.”

The Dexter boys’ team also was “expected” to be in the running for the Division 1 boys’ title. That was certainly their goal no matter what the expectations were before lining up on Saturday.

Dexter ran an awesome race but came up a few steps short of Brighton in a very close race to the finish line.

“Last year we were disappointed in a third-place finish, this year we feel bittersweet about second place,” said Dexter Coach Drew Collette. “But these are huge accomplishments and truly show the growth of the program and the winning culture of high expectations that permeates this team.” 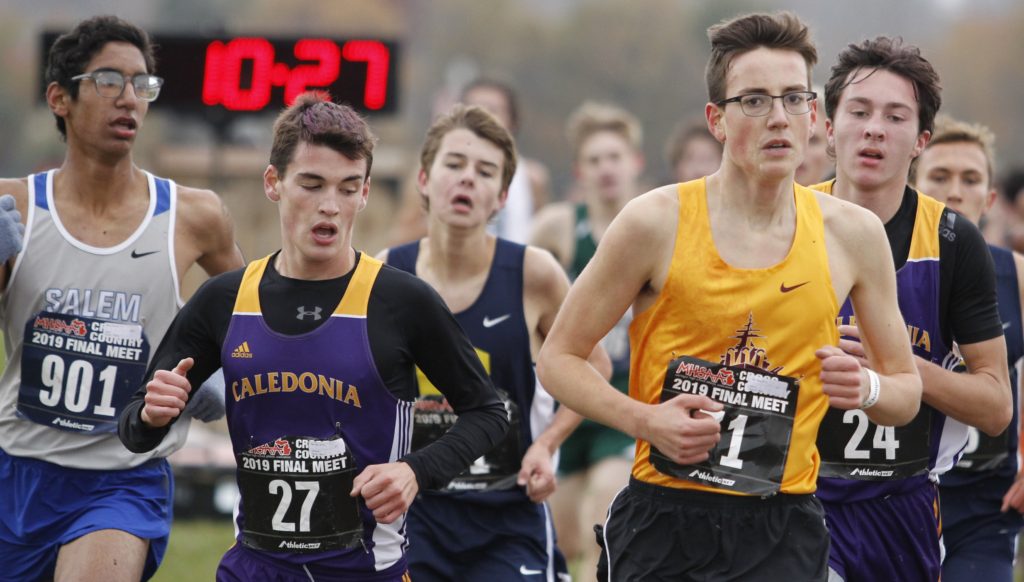 This senior class at Dexter had one goal all season, but despite coming up short – at least in their eyes – finishing second in the D-1 race is something to be extremely proud of and they overcame some big obstacles this year to get there.

A cross country state finals is an emotional day. Every runner lines up with very different goals but every single one of them earned their way to this meet. Your team has to qualify or you have to qualify on your own – no free passes to MIS.

Every runner who crosses that finish lines brings a different emotion with them but there is a sense that each one feels like they’ve accomplished something. There is a look in their eyes of “I did this.” Some collapse to the ground. Others try to keep their place in line. Others look up to the sky for their reward.

There were a couple memorable moments at this year’s finish line.

In the Division 2 boys’ race, East Grand Rapids’ Evan Bishop began smiling about 25 yards out from the finish line. The senior finished first and crossed the finish line with a huge smile of joy, satisfaction and accomplishment.

Also in the Division 2 race, Divine Child’s Michael Hancock finished third in 15:23.7 with Fremont’s Nathan Walker in fourth in 15:23.9 – as close as it can get. The two runners hugged moments after crossing the finish line. 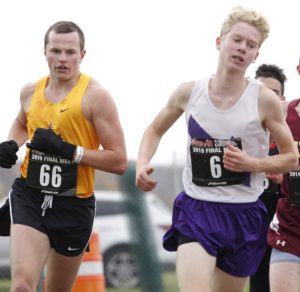 In the Division 1 boys’ race, a runner had just beaten another runner to the finish line. The winner of this two-man race slipped in the mud and struggled to get up. The runner who he had just beaten turned around and picked him up and practically carried him a few steps until he could walk on his own.

She just crossed the finish line like it was a Saturday run in the park. Her biggest smile of the day was reserved for hearing her team had finished first overall.

While cross country runners run on their own, they run for their team. And if your jersey said Pioneer or Dexter or Skyline or any other school name, there is a great sense of pride and accomplishment when the clock finally stops on one of the greatest days of high school athletics.