In a playoff game that felt like a roller-coaster ride in the middle of the Grand Canyon – yeah, thrilling – Dexter got the football back at its own 20-yard line with 2:24 left on the clock and trailing visiting Livonia Churchill 41-33. We will do the math for you – eight points.

The Dreadnaughts needed a touchdown and a two-point conversion to tie the game. No one in the building was surprised when Dexter scored the touchdown, cutting the lead to 41-39 with 40 seconds on the clock.

Dexter quarterback Colin Parachek saw a familiar face in the back of the end zone and threw the ball high – a perfect place for his 6-foot-5 younger brother Brennan. But Churchill’s Bryce Dix – all 5-foot-11 – stepped in front and made an outstanding play on the ball to knock it away and knock the Dreadnaughts out of the playoffs before a packed and loud crowd at Al Ritt Stadium in Dexter.

The game more than lived up to the hype of what playoff football is all about.

It was another great season for the Dexter football program. The Dreadnaughts made the playoffs for the second consecutive year and finished with an 8-2 record. This was Dexter’s first home playoff game and it was an exciting evening from start to finish – with an unfortunate finish for the home team. 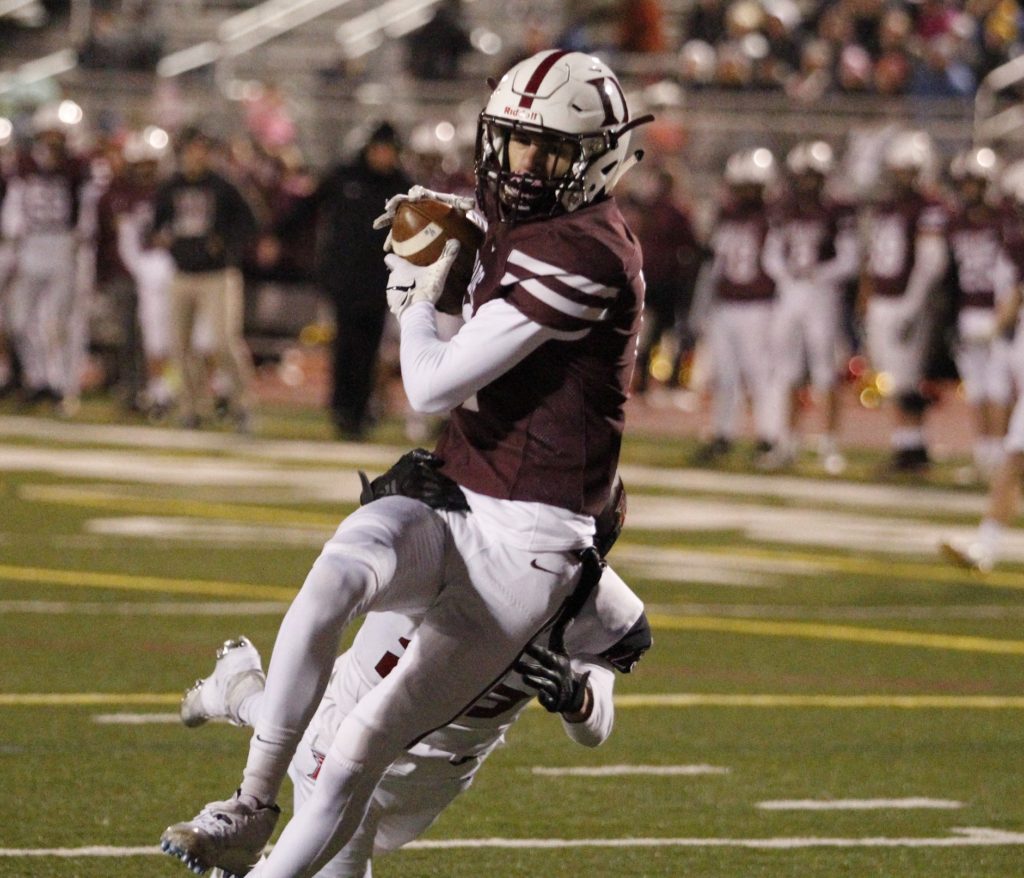 Churchill rallied from a 20-6 deficit late in the second quarter to tie the game at 20-20 and that’s when the fun really started.

With 8:12 left in the third quarter, Brennan Parachek made a great leaping grab in the end zone to push Dexter back in front 27-20.

But on the first offensive play after falling behind, the Chargers completed a 58-yard pass play to take the ball to the 6-yard line. A few plays later, they scored to tie the game at 27-27 with 6:26 to play in the third.

The Dreads would answer Churchill’s answer when Parachek threw a 41-yard TD pass Rhett Jacobs, who made a great move to get open and then took it to the house and raised the roof on the Dexter house.

The Dreads missed the extra point but still led 33-27 with 4:35 left in the third quarter. 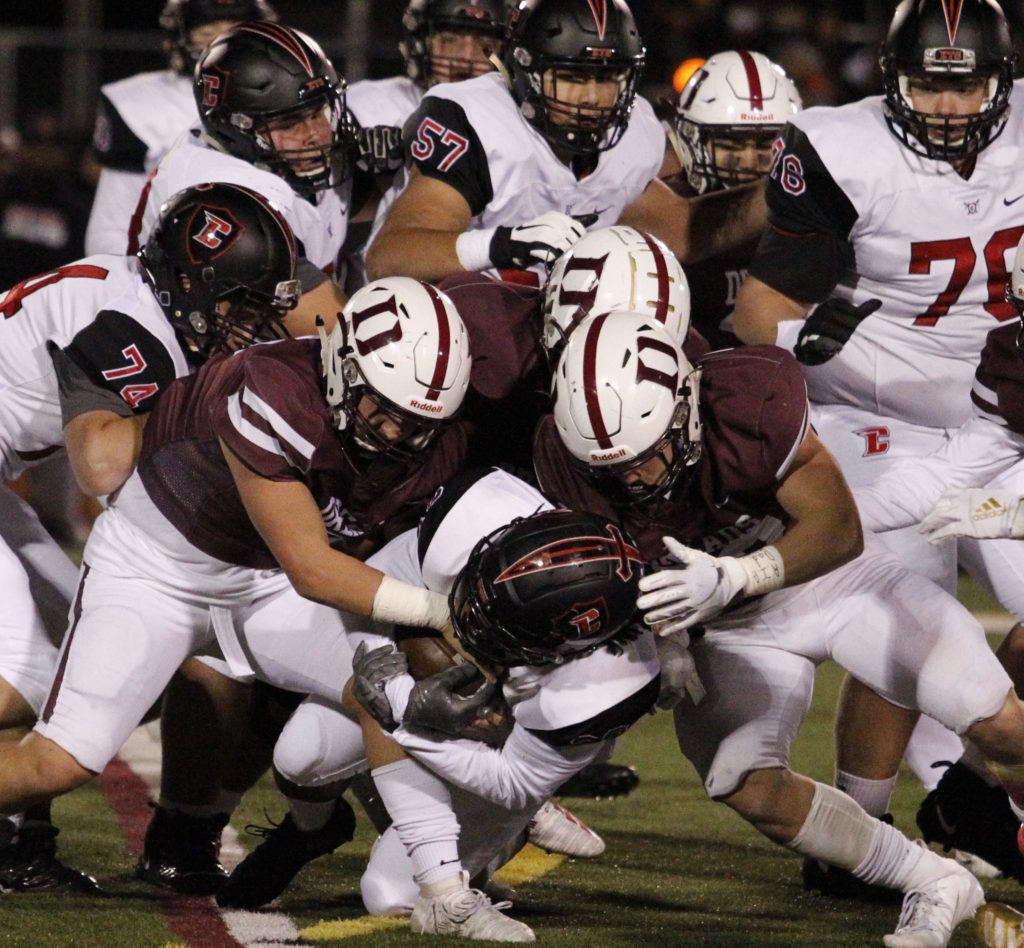 On the last play of the third quarter, Churchill faced a third-and-nine but converted a 17-yard TD pass. The extra point was good, giving the Chargers their first lead of the game at 34-33 with a full quarter still to play.

Churchill’s Jimmy Targosz picked off a Parachek pass on third and long near midfield but the Dexter defense held.

The Chargers looked like they would add to their lead but the Dreadnaughts stopped them on fourth and goal at the 6 – they only got five yards. The Dreads took over at their own 1-yard line.

But with 3:40 to play in the game, a pass play that went bad was ruled a backwards pass and the ball, recovered by Churchill, was awarded to the Chargers. That was a big call in a big spot and Churchill capitalized.

On third-and-13 near midfield, the Chargers converted a 48-yard pass right down the middle of the field for a touchdown. The extra point was good to make it 41-33 with 2:24 left to play.

And you know the rest. 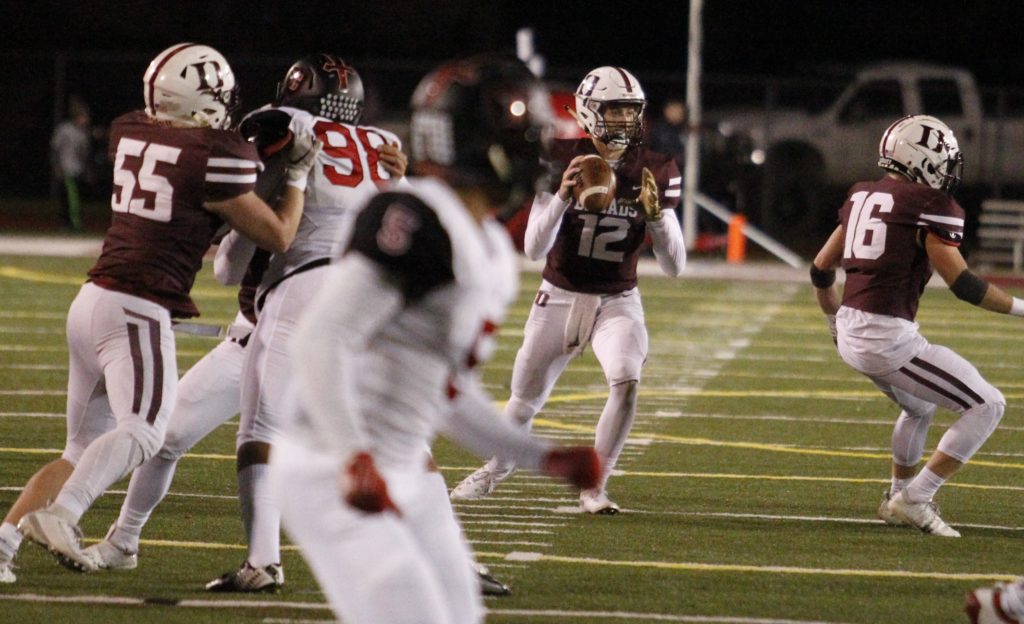 The Dexter offense may have sputtered a couple times early in the game but it also managed to put 20 points on the board in the first half.

Dexter was forced to punt on its first possession of the game but a penalty on Churchill turned a 4 and 7 into 4 and 2 and the Dreads sent their offense back on the field. After Evan Krolewski picked up the first down, Parachek hit Antwan Ficklen on a 29-yard TD pass to give the hosts an early 7-0 lead with 10:01 left in the opening quarter.

Churchill came back and scored on a five-yard run with 2:34 left in the quarter. Dexter’s Mark Young blocked the extra point to keep Dexter in the lead at 7-6.

Midway through the second quarter, Parachek and Ficklen hooked up again and both made plays with their feet. Parachek escaped some pressure, rolled out to his right and then fired a perfect pass back across the middle to Ficklen. The senior receiver made a few nice moves to get in the end zone to give the Dreadnaughts a 13-6 lead with 9:23 to play until halftime.

With 1:17 left in the first half, Parachek fired a perfect ball over the middle to Bobby Pnacek, who made a great grab and then held on in the end zone after getting drilled. The TD gave the Dreads a 20-6 lead.

But the Chargers charged back just before halftime to score a huge TD and cut the lead to 20-13.

Churchill then scored the first time it got its hands on the ball in the third quarter on a 42-yard pass play to tie the game at 20-20.