Rhett Jacobs had an unusual start on Friday against visiting Croswell-Lexington in the Dreadnaughts’ final regular-season game. The usually sure-handed Dexter receiver had two balls slip through his fingertips – balls that were not necessarily easy to catch but ones you usually see No. 2 grab and then head up field with, often for big yards.

Sometimes when that happens, the quarterback starts to look in other directions. But Dexter quarterback Colin Parachek kept looking right at one of his go-to weapons on a team with a fully stocked arsenal. There was never a doubt, hesitation or second thought.

Parachek’s faith in his senior wideout didn’t go unnoticed, either.

“I just felt like I needed to prove myself after not coming up with those balls,” says Jacobs, who finished the game with eight catches for 123 yards and three touchdowns. “Colin has faith in me, and even though I didn’t come up with those catches in the first quarter, he didn’t stop going to me. He kept looking my way and he trusted me and that’s a great feeling.” 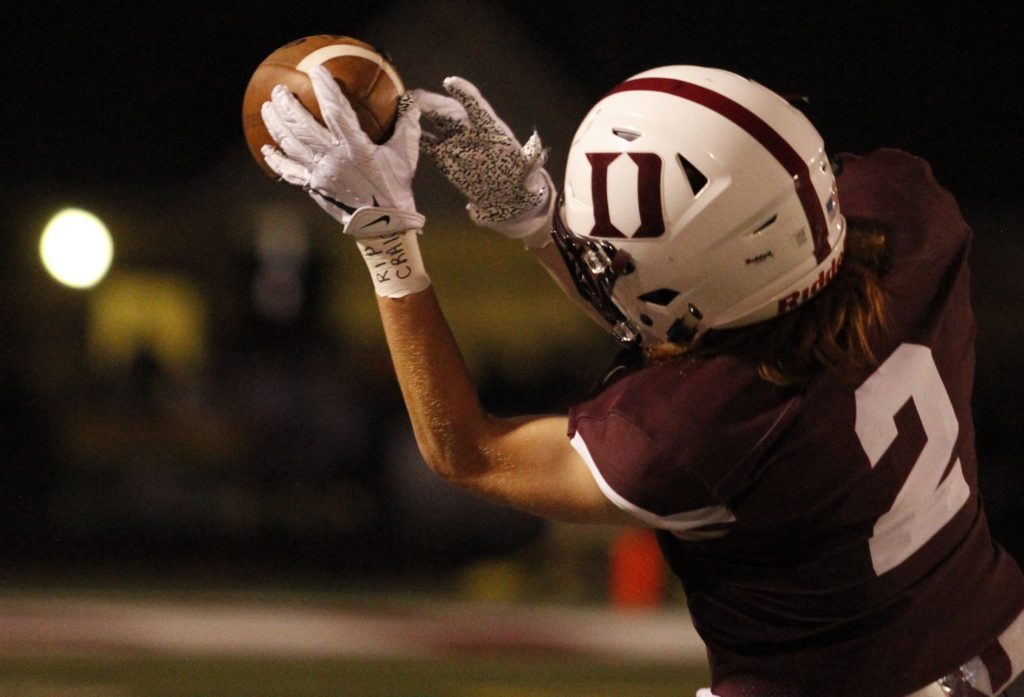 Jacobs has been proving himself ever since he strapped on a pair of shoulder pads. Having your father as the coach (Dexter head coach Phil Jacobs) often comes with more pressure. Expectations are not only higher but some feel having your father making the decisions might just tip the scales in your favor – when more times than not it’s the opposite.

Rhett also isn’t the biggest receiver on the team nor the fastest, nor the quickest. While it’s easy to see what he isn’t, it’s even very easier to see what he is – a football player. He can get open, whether running the perfect route or creating separation from a defensive back. He has excellent hands, he can throw a block and he can make that one move that is the difference between a 15-yard gain and a 40-yard TD play.

Football has been a big part of his life and that’s clearly evident when he steps on the football field. He simply feels at home between the lines.

“Growing up I used to play quarterback,” he said. “In the eighth grade I switched to receiver and I didn’t know then how good I could get at receiver until I started working at it.”

And he’s worked very hard at it, and with the hard work has come impressive results. Jacobs has 32 catches on the season for 582 yards and nine touchdowns and is part of a very strong receiving group that includes Antwan Ficklen, Evan Krolewski, Brennan Parachek and Bobby Pnacek.

While Ficklen is certainly the most exciting and dynamic of the bunch, they can all hurt you and Parachek isn’t afraid to throw in any of his receiver’s direction.

One thing these talented receivers do extremely well is run after the catch. And Jacobs says he has a theory on why that happens so often – and he passes the credit right back to his quarterback.

“Colin throws us the ball in spots that allows us to get yards after the catch instead of throwing it out of bounds or in heavy traffic,” Rhett says. “We also work out every day against our own defense in practice and I believe we have a great defense. If we can do well and pick up extra yards on our defense we can do it against anyone.”

Jacobs spent his freshman year playing on the junior varsity team at Adrian, where his father used to be the varsity head coach. “I was playing more at cornerback that year because we had a pretty solid group of wide receivers,” Rhett said.

When he switched schools his sophomore year, he also switched positions.

Phil Jacobs took over a struggling Dexter program, and the first year with the Dreadnaughts was a rough one. This wasn’t going to be flicking of a switch as much as switching a culture. And not winning a game in the 2017 season was as unfamiliar territory as the Dexter area was for the entire Jacobs family.

“Every team has its ups and downs, and we kind of had to go through that down year before we got back up.”

They got back up the following year – way up. Dexter reached the playoffs for the first time in school history. To go from zero wins to making the playoffs in one season was a testament to not only the plan, but getting the players and everyone in the program to buy into the plan.

Last year was huge for the whole school,” Rhett said. “We had 10 players come out for football because they wanted to be part of that experience. And they are all key players for us this year.

And that is what winning does.

They have accomplished the first two – with the third on their checklist coming up on Friday. And hearing the news that Dexter was not only in, but hosting a game was another historic moment on this historic ride for the Dreadnaughts.

“We met at the Dexter Pub and watched the selection show as a team,” Rhett said. “At first we didn’t see it and once we saw Dexter up there everyone started going crazy. And then we took a closer look and it said at Dexter and that was amazing.”

And Friday night should certainly be amazing.

“We can’t wait,” Rhett said. “The atmosphere is going to be crazy. Hopefully everybody comes out for that game and supports us.”

And what has been the key to their success?

“We kind of all just click,” Rhett says. “We are like brothers. We hang out after practice, go out to eat and put in extra work at the field together. We just have great chemistry and all get along on and off the field.”

It’s also about putting the team ahead of yourself and being better prepared than the opposition.

“When you are playing for the guy next to you instead of playing for yourself it makes the team so much better,” says Rhett, sounding very much like a coach. “We break down a lot of film so going into a game we know how they are most likely going to defend us so I think that gives us a big advantage. When we get on a roll our offense is pretty unstoppable.”

They also follow the plan. And a big part of the plan is not looking ahead. It’s about winning the day.

“We want to take it one rep at a time whether it’s in the weight room, in practice, in the classroom or in a game,” Rhett says. “We don’t worry about next week. We focus on this week and what we need to do to be ready for Friday.”

Rhett knows all about winning the day. It’s something he has heard from his father quite often and it’s a proven road map for success – on and off the field. Rhett is proud to be able to call coach, dad – and vice versa.

“He leaves it at the field most of the time but if there is something bothering him he will tell me,” Rhett says. “Playing for him has really been a blessing. He is one of the best coaches around and one of the best at play calling in my opinion. It’s just been amazing playing for him.”

Written By
Terry Jacoby
More from Terry Jacoby
Who doesn’t have barely worn shoes just sitting in their closet? A...
Read More