Surrounded by family, friends, fellow Lions, community members, DCS administration and even Michigan Senator Lana Theis, the 92-year-old Ceriani was characteristically humble as he thanked the Dexter Board of Education for this recognition.  Introducing his family, some coming from as far as California, his love for them was evident; but most especially when speaking about his wife of 63 years, Maria.  Describing his wife as “dedicated and devoted,” Ceriani said, “My life began when we got married.”

Ceriani also gave thanks to the Dexter Lions Club for their support over the past 40 years.  “I appreciate every one of you,” he stated, naming the organization and its members as a large part of his success in life.

Speaking about his long dedication to Dexter Schools, Ceriani shared how much he loves the students.  He talked about how he likes to joke around with the student athletes at games, not only with the Dexter teams but the opposing teams as well.  And, after recently visiting the new Alternative Education building during school hours, Ceriani expressed his admiration to program director, Julie Snider, saying, “I like what I saw.” 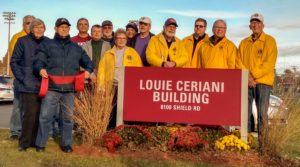 Moving outside for the ribbon cutting, Dexter United Methodist Church pastor, Matt Hook, spoke briefly about Ceriani’s years of service and dedication.  Hook made it clear that his presence was not on behalf of the school, but that he was personally invited by Ceriani, who asked to have a benediction at the ceremony.

Prior to the benediction, Ceriani said, “I am a very lucky person.  I’m 92 years old, and I thank my God for being with me since the day I was born.”  Ceriani’s faith has been a mainstay during his life, and he is currently the longest continuous member of the Dexter United Methodist Church.

Pastor Hook shared that a benediction is a “sending forth,” and that, “in honor of Louie and his faith, we are here to send one another forth in such a way that the world would be a place that chooses kindness, love and humility.” 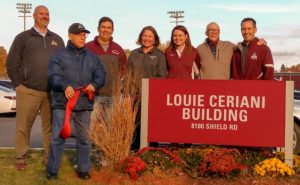 With those words, Ceriani cut the ribbon in front of the sign which bears his name, officially dedicating the new Alternative Education building.

Louie Ceriani is an inspiration to everyone he meets.  His years of service to the city of Dexter and Dexter Schools are appreciated and admired by many.  The level of community support found in Dexter is extraordinary, and it’s people like Ceriani who make it so.  In his own words, “I love Dexter, and I’m not going anywhere.”