There are certain athletes that just – for some reason – stand out. As the game or match or meet moves along, a player or two will always seem to be in the middle of the action. They are sometimes the fastest. Sometimes the strongest. Sometimes the loudest. But always the difference maker either with their play or their approach or just the way they play the game.

Quinn La Fontaine stands out on a volleyball court. There is something about her that grabs your attention and makes you stand up and take notice. The great news for Dexter is that the Dreadnaughts have a few of these “stand out” players – which is probably why they are standing all alone atop the SEC White Division and one of the top teams in the area heading into Districts.

I bring my all to every game,” La Fontaine says. “I am a captain on the team this year, and I’ve started to notice that as an upperclassmen and team leader, I can really set the tone for the team. If I come in jumping around and yelling, everyone follows suit and I see this as an opportunity to have a really great game because energy is what makes a game for us.

La Fontaine gets pumped up after her team scores a point – whether she is involved or not. She also pairs that enthusiasm with a laser-like focus. “Although I have this crazy energy I feel like I also have this crazy focus and determination on the court,” she says. “I tune out everything happening in the stands, in my life, etc. whenever I get on the court and I play my game like I know how. I am focused but also enjoy being out there at the same time.”

Another reason why La Fontaine stands out is because of her team approach to the game of volleyball. She brings just as much energy celebrating a point with her teammates as she does climbing the net for a spike.

“Volleyball is very much a team sport and you have to rely on your teammates to play the ball and work hard to get the point,” says the standout Dexter senior. “In volleyball we get very loud and happy for each other when we do well and the energy it creates is something I can’t even describe. The rush of adrenaline, movement, and communication is something I cannot compare to any other sport I’ve played.”

That teamwork that is essential on the court also has carried over off the court. “I think that has helped me a lot off the court as well with my ability to work with others,” she says.

Now in her third year on varsity, La Fontaine said the Dreadnaughts came into this season with some big shoes to fill and expectations – at least from the outside – were not very high. “We lost a lot of strong seniors last year so there was talk of this being a rough season for us since we had a lot of younger players,” she says. “This really motivated us to work harder and show that we can still do well with what we have.”

That hard work and dedication and belief in themselves resulted in an SEC White Division championship.

“We have worked really hard on building a better team dynamic than we’ve had in my past years,” La Fontaine says. “We wanted to make sure that we all got along and that we could all be happy with one another when we did well. This has translated greatly into game play. Our communication has greatly increased and our energy along with that.”

Another key to their success has been a strong and steady defense. “Livvy Mellifont and Kaitlin DeLacy are both players who were on varsity last year and it is so nice to have that defense back with us this year,” La Fontaine said. “They work so well with each other and are able to pick up any ball that comes their way.”

La Fontaine says there is a strong bond this season with a group of good friends who all get along on and off the court. And that chemistry has stirred up plenty of positives for the Dreadnaughts. “We are very silly and funny but we are also very serious and get work done,” she says. We ‘love to win,’ we don’t ‘hate to lose,’ we work to win and we aren’t scared or nervous of what the outcome will be.”

La Fontaine began her DHS volleyball career as a captain on the freshman team before being called up to JV midway through the season. Her dedication in club volleyball and during the off-season paid off with a spot on the varsity as a sophomore.

“Being the only sophomore on varsity was a little intimidating but so many of the upperclassmen were so kind and helped me get adjusted to the team,” she said. “I played a lot during tournaments, and the opportunity gave me time to observe the upperclassmen and see how they all work together. This was definitely one of my favorite years in the volleyball program.” 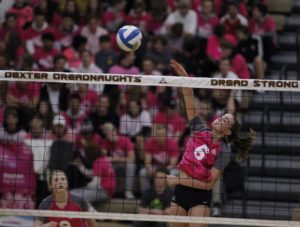 She earned more playing time and became more of a leader during her junior year on varsity. “This was also the year when we got a new coach, Liz Melvin,” says La Fontaine. “This was a big transition from coach D’Ann Dunn but we were able to still have a great season and work together.”

La Fontaine, 17, plans on attending Michigan State University and will study biology. She also plans on running track in the spring and also is the vice president of Student Ccouncil and is a member of the National Honors Society.

But first there is a goal to be accomplished and that begins with beating Saline – not an easy opening assignment for Districts.

“We have grown incredibly as a team skill wise and compatibility wise that I have no doubt that we can take that game against Saline,” she says. “We have to work on our focus and determination on the court. We have worked a lot on positive energy this year so we’ve made sure that when mistakes happen we shake them off and work for the next point.

“And we always bring our energy and we have goals to keep that energy alive even when we might not be doing so well. Putting all of our effort and drive into that game will help us bring home that win.”

Written By
Terry Jacoby
More from Terry Jacoby
Now, this is a good sign. The Dexter volleyball team faced one...
Read More