There were two moments during Wednesday night’s game – one early and one late – that kind of sealed the fate for the Dexter boys’ soccer team. At the very least they were two of those “oh, no” moments you feel in a big game where you start to think maybe this is not your night.

Dexter hosted Saline in a District soccer semifinal on a cold night that featured plenty of heat on the pitch – in fact, during the first half the referee summoned the two captains to midfield to instruct them to have their players take it down a notch in the complaint department.

It was more or less an even match coming into the game. There was no clear cut favorite – just two quality sides ready for a postseason showdown with everything on the line.

Early in the game, the Dreadnaughts had a cross right into the Saline goal mouth and somehow, someway the ball may have taken a strange bounce but it ended up sailing over the crossbar instead of into the open net. Bad sign No. 1 for the Dreadnaughts. 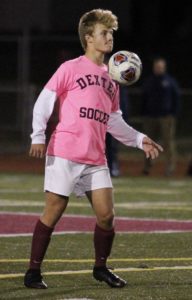 Near the end of the game with Dexter trailing 1-0, Dexter’s Andrew Scherer found himself with the ball parked right in front of the Saline goal – less than 10 yards away. The sophomore cranked up a shot that had plenty of force behind it but somehow, someway Saline keeper Samuel Herner guessed right, dove to his left and made a spectacular diving save with 14 minutes left on the clock. Bad sign No. 2 for the Dreadnaughts.

Saline held on for a 1-0 victory and advanced to Friday’s final where the Hornets will face Pioneer for a District title. The Pioneers knocked off defending state champion Skyline 2-1 in the earlier semifinal at Dexter.

The Hornets scored with 17:50 left in the first half. Saline’s Zeke Gray cut across the middle of the pitch about 25 yards away and hit a rocket into the left corner of the net to give the visitors the advantage. Dexter keeper Wiley Smith had no chance of getting a hand on the ball.

In between bad sign 1 and bad sign 2, the host Dreadnaughts played a strong game. In fact, Dexter probably had more quality scoring chances in a game that was played with plenty of action in the middle of the pitch. The Dreadnaughts played well, especially along the back line which has been the case all season.

Written By
Terry Jacoby
More from Terry Jacoby
After going 6-15 last year, changes were made with the coaching staff...
Read More