When Nathan Larson crossed the finish line on Saturday at the Portage Invitational, he ran right into the Dexter history books. But that’s not all that surprising because the Dexter senior cross country runner has been dropping time and increasing his standing ever since he slipped on a pair of sneakers.

Larson finished with a personal-best time of 15:41.9 – almost 10 seconds better than his previous mark for the year – and landed in 11th place in Saturday’s meet and more importantly landed in eighth place all-time in the Dexter High School record books.

Larson, 17, is driven to be the best he can and he accomplishes that by simply outworking the guy he’s running next to. “What keeps me motivated is knowing that if I want to stay ahead of the competition I need to work harder than they do,” he said.

His training schedule isn’t a walk or a run in the park.

“I run 48 weeks a year taking two weeks off after track and the same for cross country,” says Larson. “I run six to seven days a week and usually do one or two hard workouts each week and average about 50-55 miles a week capping out at 70 during August.”

They call that busing it –and it’s paid off for both Larson and the Dreadnaughts, one of the top cross country teams in the state in Division 1. Larson has finished top three in four of Dexter’s seven meets this year.

“The season is off to a relatively slow start but once we start to drop the mileage things should start going really well for myself and the rest of the team,” he said. “We have had some great success so far, but I think that there is much more to come.”

One thing Larson is running for is a spot among the best in the state. He has some big goals for himself and his team when they head down to MIS next month for the Division 1 State Finals.

“My personal goal is to be top 10 at the state meet, and as a team I think we can win the state title,” he said. “To be top 10 individually at the state meet I need to work on staying strong in the middle mile of the race. As a team, we need our fourth and fifth runners to step up and start to run fast more consistently.”

Larson, the son of Jon and Seana Larson, started running cross country in seventh grade because “my mom made me.”

And he’s glad she did. 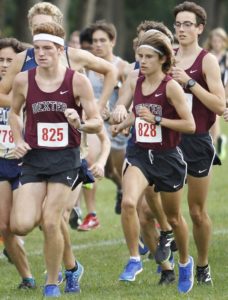 “I knew I was fast from running different school races in elementary school, but I had never considered running competitively before middle school,” he says. “Prior to running I had played hockey and soccer but what I liked about running is that you can’t blame success or failure on other people.”

Larson also runs at the head of the class. He has a 3.92 GPA and is a member of the National Honor Society. After high school, he plans to continue running at the college level and study “either something statistics related or sports media.”

But right now, he’s focused on helping reach those lofty goals running with a team he very much enjoys being a part of.

“We are a group that knows how to work hard but also enjoy having fun when it is appropriate,” he says. “Overall, it’s a group of guys who just want to enjoy being a part of a team with success.”