Olivia Mellifont goes by Livvy, so let’s call her that, too. Because the Dexter HS junior athlete has certainly earned it – both on and off the athletic field.

Livvy is currently playing libero for the Dexter volleyball team. In her “spare” time she is a guard for the basketball team and plays all over the field in softball. She’s a three-sport athlete who not only loves to compete but just loves life.

One thing is certain, Dexter volleyball coach Liz Palmer is glad to have Livvy both on the floor and on the roster.

“She is a real go-getter,” Palmer said of her libero. “She is one of those athletes who would run through a wall for you. She dives on the floor, gets nailed in the face with the ball and always bounces back. She’s a leader, a role model and the captain of our defense. She is the type of athlete every coach hopes to have on their roster.”

And there are three coaches at Dexter who love having Livvy on their roster. She just loves to compete whether spiking a ball, dribbling a ball or hitting a ball. 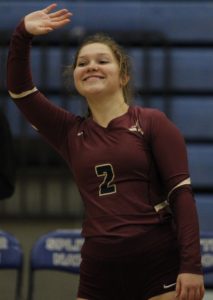 “Volleyball is probably my main sport but I love playing all three,” she says. “I love the energy of volleyball and I feel like it best represents my personality with the screaming and cheering and energy the game has. I like the bond with teammates you have in volleyball. And volleyball really is a team game and you have to work as a team to be successful.”

And the Dexter volleyball team has been very successful this season.

“This team just has a lot of energy and it doesn’t matter how we are doing, the energy level is always high,” she says. “Everyone is very encouraging and never negative. We are really a team working together instead of a group of individuals.”

And while the Dreadnaughts are 25-5 on the season, they still have some big goals and challenges waiting for them down the line.

The Dreadnaughts will host Division 1 District 17 and will face Saline in the opening match later this month. The Hornets are a very good team as well and defeated Dexter in the first match of the season.

“Our goal is winning the Districts and we know that won’t be easy,” Livvy says. “We have to play Saline in the first round and that is going to be a tough game. But we are working really hard every day to get better and staying positive and playing and practicing with a lot of energy.

“And we have gotten a lot better since we played them.”

Livvy first became interested in volleyball just before she started seventh grade. One of her friends, who is a teammate of hers on varsity this season, introduced her to the game.

“I was trying to choose which sport I wanted to play and she got me a volleyball for my birthday so I had to at least try,” she said. “And from the day, I loved it.”

Livvy says because she was playing other sports at the time and was a pretty good all-around athlete by the time middle school rolled around, she took to volleyball pretty quickly. She wasn’t an overnight sensation, but by the end of the week she was catching on.

“I remember I was one of the few players who could serve just because I had been playing other sports,” she says. “I did need help with the mental side of the game and my coaches and teammates really helped me there.”

Livvy played on the junior varsity team as a freshman and was on varsity last year as a sophomore. “It was challenging at first, just trying to blend in with all the seniors,” she says of her sophomore season. “We had some really good seniors on the team last year and they all took me under their wing and I really enjoyed it a lot. There was some great competition and it was a little nerve-wracking at times but overall it was a great experience.”

“Right now, I’m just keeping my options open when it comes to college,” says Livvy, who has close to a 4.0 GPA. “I really enjoy math and science and want to go into the medical field.”

Written By
Terry Jacoby
More from Terry Jacoby
While the Dexter boys’ basketball team may have let one slip away...
Read More