Yes, Sophia Grant runs to the beat of her own drum.

The talented senior is not only leading the Dexter girls’ cross country team around the course this season, but also helps lead the Dexter HS Marching Band as one of the group’s three drum majors.

It’s certainly a busy time of the year for Grant but she doesn’t appear to be slowing down in the least. In fact, she’s picking up the pace during a senior year that has already featured plenty of highlights. She says the current cross country run she is on has been “by far been the best season of my high school career.”

She finished her junior year with a PR of 21:49, a time she has beaten every time she has crossed the finish line this season. Her current PR is 20:35.

Then there is the team.

“My team has also seen major improvement,” she says. “A lot of my teammates have seen multiple PRs this year, and we are starting to become more competitive in our region. I really want to thank our coach Seana Larson for helping push us to become better athletes this year. She’s made a huge difference in helping us improve as a team.”

Larson, in her first year coaching the Dreadnaughts, has been more than pleased with the runner at the head of the Dexter pack.

“Sophia is a top notch kid,” she says. “She is the team leader on the XC course and leads by example every day at practice. She really is proof that hard work pays off.”

Larson says Grant took it up a notch last winter and carried that improvement and dedication into last spring’s track season. She ran a 33 second PR in the 1600m and over a 2 minute PR in the 3200m.

“She also worked very hard over the summer and she has already improved by 1:14 over her best time last year,” Larson said. “I do not think she is finished improving this season.” 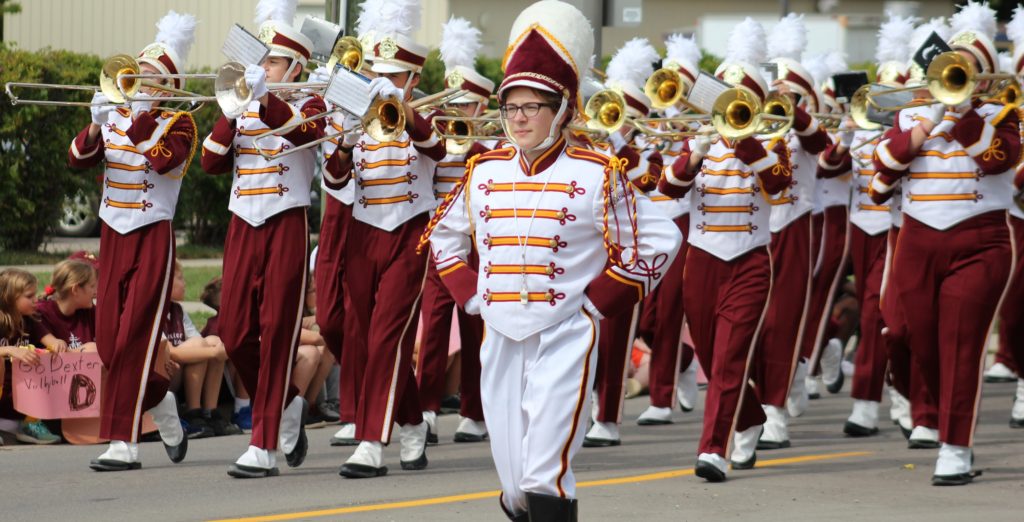 “I hope to break 20 minutes by the end of this season,” she says. “I also hope that the team can start to place higher in our division and beat some of our rivals.

“As a team, we really need to train hard and keep increasing the mileage. We are running a lot more this season than we have in the past, and that is helping us drop time and maintain endurance. We just need to keep pushing each other, working hard at practice every day, and making the most of every workout.”

Grant says this year’s Dexter team is not only committed to improving but also a close-knit group.

“We are all pretty close friends, even outside of practice,” she says. “We have a great vibe and are able to have fun together and make each other laugh while still putting in the work. This team is also a great support system. We all get excited when one of our teammates has a great race, even if we didn’t ourselves. I think that’s really special. Not all sports teams have the drama-free relationships we all have with one another.”

“When I started cross country in middle school, I was one of the slowest runners on the team, and one of my first two-mile runs took me 19 minutes,” she says. “I was determined to improve upon that, and I have seen my times get substantially faster every season as I keep training harder.”

She says she now tries to run 40 miles a week but that can change based on the team’s schedule. But she always runs with an open mind.

“Running is definitely a mental game, and I like the challenge it creates,” she says. “I also love how cross country is both a team sport and an individual sport. Although you and your team are racing against other teams and trying to win the meet, you’re really just trying to beat the clock and get faster on your own. There aren’t many other sports where you can measure yourself and your team separately like that.”

Larson has been impressed with Grant’s commitment to cross country despite her busy schedule. “She never misses practice and is always figuring out ways to fit runs in around marching band,” Larson said.

Did someone mention marching band?

Grant, who plays French horn, has been marching with the band since fifth grade. This year, she is one of the drum majors for the DHS Marching Band.

“I love playing my instrument, and I particularly love marching band because we put in a lot of time to put on a great show at every game and at marching band festival, and it’s fun to be one small part of the big shape and sound we make on the field,” says Grant. “I’ve also made a lot of great friends through the band. As a drum major, I not only conduct the band but also am one of its leaders. The drum majors help keep the band organized, on task, and enthusiastic. Being a drum major is a big job and requires a lot of work, but I love every part of it. I’m proud to help represent the community spirit the band creates.”

Despite the time commitment to band and cross country, she has not let her grades in the classroom suffer. Oh, far from it. Grant, who also is an officer in the model UN at school, has an impressive 4.32 GPA despite her busy schedule and carrying a very rigorous course load.

After DHS, Grant plans to attend college and continue running.

“I hope to at least find a running club I can join at college so I can keep running and possibly have the opportunity to participate in more races,” she says. “I plan to study international relations or political science in college.”

Let’s let her coach take this story across the finish line.

“I really do not think there is anything this kid can’t do,” Larson says. “She impresses me daily with her work ethic and positive attitude. She is a pure joy to coach.”