There are many roads to choose when you are a teenager, and the path you take can lead to things you planned out, dreamed of or never in a million years saw coming. From enrolling in college, joining the military, getting a job or falling in love – that road from teenager to adult can be both challenging and rewarding.

But when you clearly know in your heart and soul what you want to do when you are 16 years old, the road straightens out in front of you. Sure, there will be some curves and hills to navigate, but knowing where the finish line is helps fuel the ride and keep things on the straight and narrow.

Keith Hafner knew “exactly” what he wanted to do with his life at age 16. So last month at age 62 when Sr. Grand Master Brenda Sell awarded him the Taekwondo ninth-degree black belt – the highest honor in Taekwondo – it wasn’t really a surprise. Yes, it was a big deal – a very big deal – but not a surprise.

Despite having one of the most successful martial arts schools in the country right here in Ann Arbor, Hafner says there was never a thought of not going for his ninth-degree black belt. He compares going for the next belt, even if it’s the highest belt, as just the next step. It’s like when you finish your junior year of high school, you go on to your senior year – it’s just what you do. 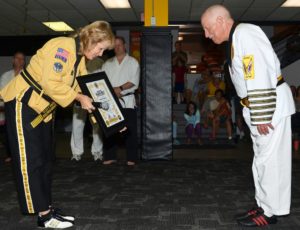 “When you choose the path that I decided to take a long time ago and stay on that path, it’s just the next step,” Hafner says. “It wasn’t like there was a choice of not doing it. It’s very special and very motivating but I always figured I would eventually get here.”

You never forget your first – and Hafner says he remembers getting his white belt like it was yesterday.

“Yeah, I remember that really well,” he says. “I was 16 and a hippie kid and I started karate because that’s what my buddies were doing at the time. In 1973, martial arts wereei rare and not really understood in this country. There was a lot of mystery to it. So getting that white belt was special and I knew then that this was the right fit for me.”

It was a perfect fit in more ways than one. A lot has happened for Hafner between the time he received his white belt at age 16 and his ninth-degree black belt at age 62. His joy and talents as a writer, his love of family, and his commitment and dedication to martial arts have been among the constants in his life.

“My whole life has happened along the back drop of the martial arts,” he says. “It has never left me even for a day. I never saw any other life for myself than doing what I’m doing right now.”

The ninth-degree black belt is the highest level one can achieve in this style while living. 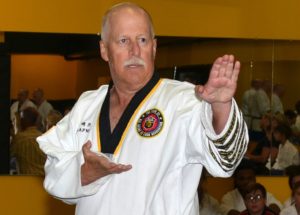 “Keith Hafner came to my late husband and I when we owned the Academy of Taekwondo in Ann Arbor,” Sell said. “We were coined The Sell Team and founded the Ann Arbor location and made it the headquarters of our national Association which is called the United States Chung the Kwan Association.”

Brenda’s late husband, Edward B. Sell, was a legend in taekwondo who established the association in 1967 – now the oldest taekwondo association in America. Brenda is the president of the USCDKA and carries the title of the highest ranking female in Chung Do Kwan.

Brenda remembers the day Keith Hafner walked into their school.

“He was a brown belt from his training in college and he wanted to continue and earn his black belt,” she said. “Even in those early days of the 1970s Keith was a very hard worker. Whatever he put his hand to do he gave 100 percent. I remember when he met his wife and they were married he came into the school and asked for a job. We hired him and handed him a broom and put him to work. Several years later his love for not only Taekwondo but also his love for people was very evident. His career path emerged as a professional martial artist.”

Eventually, the Sells sold the business to Master Keith Hafner. 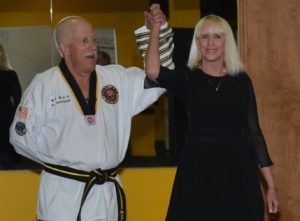 She is obviously very proud of one her and her husband’s top students. “Keith has become a pioneer in transforming modern-day martial arts from the club to a profession,” she says. “He has helped black belts all over the country to become a black belt in business as well as a black belt in martial arts.”

The belt system of Taekwondo takes the student through the process of setting and accomplishing short-term, mid-term, and long-term goals. It starts with a white belt beginner and moves all the way to black belt, which starts with first degree with the final rank of ninth degree.

Very few people ever accomplish this pinnacle in martial arts.

“There’s a longevity that’s required because becoming a master and a Grand Master involves more than just the physical test,” Sell says. “It also involves your contribution and what you become in the process. The time in grade between each black belt rank is the same number of years as the next rank.”

Hafner became the first student that she ever tested for ninth-degree black belt in the 52-year history of their organization.

“It is a great honor for me to welcome Grand Master Hafner into the ranks of ninth-degree black belt,” she said. “His contributions, dedication, commitment, discipline are unparalleled and he truly exemplifies the position. His entire life parallels the character traits of a true ninth-degree black belt. He lives his life with integrity, has a beautiful family, has a wonderful 43 year marriage, great relationships with his sons and their families, is a light in the community, and has contributed to the growth and development of Taekwondo worldwide.” 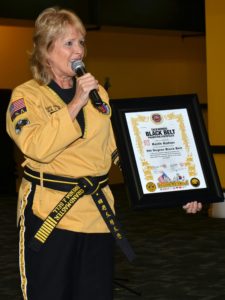 While it was something “you just do,” Hafner does realize just how special and unique becoming a ninth-degree black belt is and is “honored” to join such select company.

“When you think about it, it’s like climbing a ladder and it’s a very tall and long ladder,” he says. “To reach the pinnacle is something I am proud of. It’s pretty select company once you get up here. I’m humbled and inspired by joining these people at the top of the ladder.”

Senior Grand Master Edward B. Sell had a saying: “A black belt is a white belt that never quit.”

Written By
Terry Jacoby
More from Terry Jacoby
The local boys’ swimming and diving team lined up on Saturday at...
Read More