Before the Dreadnaughts kicked off Thursday’s SEC game against rival Chelsea, Dexter assistant coach Jamie Lewis touched on the importance of the match.

“It should be a good match,” Lewis correctly predicted. “The SEC White championship this year will be decided by an end of season tournament next week so this game will be important for seeding and home field. In rivalry games like this, you can throw out the records with both teams putting their best foot forward.”

Both teams certainly put their best foot forward on a perfect day for soccer at Chelsea. The two teams battled to a 1-1 draw – the same result as when the teams met earlier in the season at Dexter.

Senior Braden Lint scored the lone goal for the Dreadnaughts while Nate Quintana found the back of the net for the Bulldogs.

Dexter is now 10-1-6 and 5-1-1 in the SEC White Division. The Dreadnaughts came into the game with victories over SEC foes Bedford, Ypsilanti, Adrian and Lincoln. Their only loss was a 2-1 defeat against Jackson.

“I thought there were some good moments,” said Dexter head coach Drew Ducker of Thursday’s draw. “It’s always a tough game with Chelsea. It’s a big derby each year. We talked about staying composed and playing our game. We’re very good when we’re patient and we string passes together. We talked about getting better pressure on the ball and then they won’t be able to score.”

It was certainly a back and forth game with both teams have chances.

“I think the first 10-12 minutes, we had a lot of chances,” Ducker said. “They doubled Hayden (Newton) which I thought opened up some looks for other guys. I thought Braden had a great finish. He’s helped us a little more lately and we’re going to need that.” 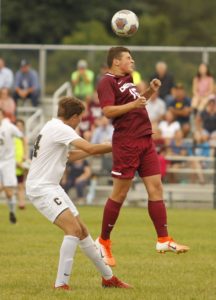 As the game kicked off, with Dexter possessing the ball first, there was a lot on the line for both teams. Just 2 minutes into the first half, Dexter was putting pressure on Chelsea’s defense, earning a corner. Although it wasn’t successful, the Dreadnaughts kept pushing the ball down field. Ben Pritchard had the first shot for Dexter but it was wide left.

At the 33:39 mark in the first half, Dexter would break through as Lint scored off the right side. Chelsea attempted to answer less than a minute later but they overshot the corner. Nearing the halfway point in the first half, the Bulldogs’ goalkeeper made a diving save.

Both teams had good looks for the remainder of the half, including a shot-on-goal from freshman Juan Morales-Leverett of Dexter, but neither team was able to score.

Dexter held a 1-0 lead at halftime.

Lint had another scoring chance early in the second half as he earned his second shot on goal, but Chelsea was able to keep the deficit to just 1-0. Jack Kolka was very active in the final 40 minutes as well, fighting for a corner and free kick, but the Dreadnaughts weren’t able to capitalize on either.

After battling hard in the second half, Chelsea was finally able to get on the scoreboard with 1:55 remaining, as Ben Yeasting crossed the ball into Nate Quintana for the late goal. The home crowd cheered as Chelsea tied the game and neither team was able to find a go-ahead goal in the final minutes.

“It was good for Chelsea to battle with us and get a draw,” Ducker said. “And we’ll work and make sure it doesn’t happen again. I think if we play our game a little better the last 20 minutes then we either get another one or we get better control of the game.

“Anything can happen in conference and districts so we want to make sure that we’re playing our game offensively and defensively and we come out to get a win no matter the opponent.”