Dexter’s Cierra Daratony grew up on a horse – she got her first pony when she was 2 years old. But it’s not like she really had a choice.

“I have three sisters, all of whom are over 14 years older than me, and all three rode horses and used to compete so when I came along they started me off young and put me on top of their horses before my first birthday,” says Cierra, now a junior at Dexter High School.

She must have really enjoyed the view from up there because she’s been on top of a horse ever since. And her love of horses and competing has allowed her to meet some fantastic people, see some incredible places and experience things very few ever get the chance to do. It’s also allowed her to not only dream big, but accomplish big – like she did this past summer.

Cierra competed in July at the Adequan North American Youth Championships (NAYC) at Rebecca Farm in Kalispell, Mont. She not only competed, but her team, Area VIII, won the gold medal in the CCIJ2*-L. 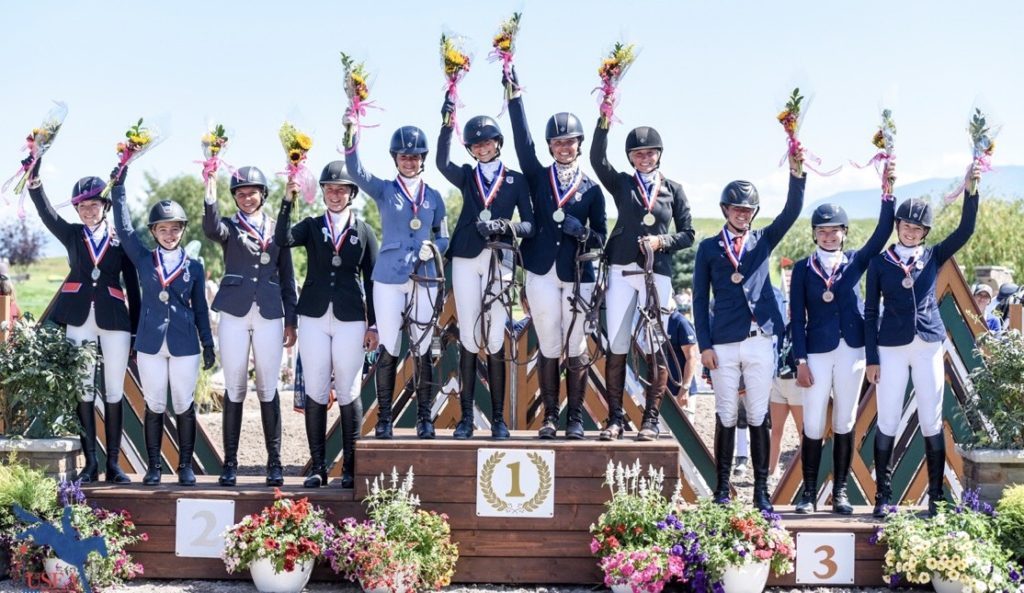 Cierra piloted Rio de Janeiro (River Dancer x Vanilla Ice) to a clear round, finishing on a 32.0 for Area VIII. “As soon as we jumped the first jump, I knew it was going to be great. He was amazing,” she said of her 10-year-old Holsteiner/Thoroughbred gelding.

NAYC is both an individual and team competition – much like the Olympics. The competitors and teams “ride in” from all over the United States, Canada and Mexico. For the team competitions, the U.S. is divided into “Areas.”

“My team represented Michigan, Ohio, Indiana and Kentucky (Area 8),” says Cierra. “Canada has three areas, Hawaii has one, and Mexico has a few. Each area picks the four top riders within the area to represent. Along with these four riders they pick two alternates to go in case one of the team members or their horse gets injured. This year’s event was at the beautiful Rebecca Farm in Kalispell, Montana.”

The Area VIII team was special on and off their horses. They formed a unique bond and lasting friendships. In fact, it was hard not to get emotional and be excited for Area VIII as they rose to the occasion to claim team gold. Their huge smiles and enthusiasm said it all. This team not only came to win, but to enjoy a week filled of teamwork, support and memories.

The Area VIII team was clearly a tight-knit group, and their team spirit could be seen and heard around course. “My favorite thing that we do is just cheering each other on for all of our rides,” said Area VIII team rider, Gracie Elliott. “We’re really loud, and we probably annoy everyone, but we just have so much fun.”

“Ever since that first show I was hooked and have continued to Event since then,” she says. “I started off with ponies who were worse behaved than most horses, but taught me how to stay on – after many failed attempts.”

When she was 13, Cierra’s horse was injured. But mom came to the rescue.

“My mother offered me her horse who had been born at our barn and was 7 years old,” Cierra said. “At the time I was about 4-foot-8 and the horse she offered me, Rio De Janeiro, was 17.1 Hands (about 6 six feet to his back). I began riding him at smaller shows where we were very successful. Well, my mother didn’t end up getting him back as I continued to show.”

Since then, Cierra has taken Rio from the second smallest level in Eventing to the second highest.

“Rio is super athletic and many professionals, along with myself, think he definitely has the capability of soon competing at Olympic level,” she says. “Along with being successful during the competitions, he has the personality of a big dog. Many horses who have just had professional training do not interact with people the way Rio does because my family and I raised him ourselves.”

Cierra plans to continue riding on and seeing where this journey takes her. Whatever the outcome, she will enjoy both the ride and the view.

“I am really just hoping to continue training horses and continuing up the levels successfully,” she says. “A long-term goal is to possibly go to the Olympics or to compete overseas. Though it’s a long shot, I am willing to put in the work and effort to try my best to give myself the opportunity.”