This is Part 1 of Melanie’s Minutes – a report from the Sept. 16th Dexter Board of Education meeting.

With the scheduled absence of both President Michael Wendorf and Vice President Julie Schumaker, the Sept. 16 Board of Education meeting was presided over by Trustee Daryl Kipke, and opened with the approval of the Aug. 26 meeting minutes.  Trustee Barbara Read stated these minutes required an amendment due to, “omission and fabrication.”  Read said the minutes should reflect that, after being in session for approximately 2 ½ hours, there was a 6-minute break in the meeting (during which board members stretched their legs and used the facilities) that constituted an action item and should be recorded as such.

Read also asked that the summary recorded for “Item O. Other” be limited to the first line, “Board members shared their thoughts and reflections from the August 20th workshop,” as the following sentence, “Six board members expressed a need to publicly distance themselves from the actions of Trustee Barbara Read based on her continued discussions of board business in closed social media groups, communications that undermine the integrity of the Board and district administration, and for prioritizing her personal agenda over her responsibilities as a board member,” are a “fabrication.”  The board voted unanimously to amend the minutes per Read’s request. 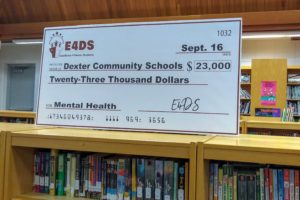 Representing the American Red Cross, Gerry Abejuro expressed his deep gratitude for the many blood drives held at Dexter Community Schools.  Abejuro shared that during the 2008 recession, when blood donations were very low, DCS stepped up.  Former DCS staff member Cheryl Wells and her student, Rachel Wilkinson, coordinated weekly summer blood drives from 2008-2011.  Their efforts bloomed into a 30-year relationship between DCS and the Red Cross, to which Abejuro said, “no one can in the country hold a candle.”  Many thousands of pints have been donated from Dexter, saving tens of thousands of lives.  Abejuro presented the board a plaque thanking the District for their contributions.

Following Abejuro’s kind remarks, Excellence for Dexter Students (E4DS) president, Elise Bruderly, and her entire board presented the BOE with a generous check for $23,000 to be used for mental health education.  Full story here.

The Board and Superintendent Chris Timmis expressed their gratitude to E4DS for the donation, as well as the recent E4DS annual car show fundraiser which raised over $9,000 for the District.

During his superintendent update, Timmis shared that Hill Auditorium is no longer available for the 2021 DCS commencement date, so the District is “back to the drawing board” regarding a graduation venue.

He then presented data from a special education survey conducted last year, with 188 parent participants; early feedback states that 83% rated the quality of the special education support as 7/10 or higher, 94% said special ed staff respond to their questions in a timely manner, 93% feel welcome at IEP and 91% understand how their child became eligible for special ed services.  Areas of opportunities include parent training, consistent communications and providing additional opportunities for parent involvement.

In other District news, The Michigan Department of Education accepted Dexter’s Early Middle College application and the program will begin next fall.  And, after almost 5 years of work by DCS and several other districts around the county, the Michigan Department of Education finally approved EMU to set up a program for para-professional and special education teacher training.

Sharon Raschke, Dexter CFO, updated the Board on the ongoing Brian Tungl restitution case, starting with thanks to the Board for their continued support.  Tungl’s hearing was earlier in the day, at which Judge Swartz stated Tungl had made a payment of $44,000 at the end of July, all to be turned over to the District.  Rashcke stated once this payment is received, Tungl will have fulfilled the entire $51,052 owed the District out of a total $309,000 restitution; the remaining balance will be paid into a trust.  Judge Swartz was adamant that the school be made whole and Raschke will continue working with probation and collection officers to encourage continuing payments, as the school stands to benefit from the collection of the remaining balance.

Timmis then presented 2018-2019 M-Step and NWEA testing data, saying that Dexter did okay overall. However, after historically strong correlations between M-Step and NWEA scores, the predictors are no longer matching up like they used to and the administration is working to figure out why.  Last year’s M-Step scores held steady or dropped slightly in both reading and math across grades 3-7, but Dexter still ranks in the county’s top five, and in most grades the top three.  Scores dropped more in reading than math, and the District is turning their focus to how 3rd grade brains learn to read.  Full assessment data can be found on the BOE website.

Student representative Chad Robards updated the Board on high school happenings including the students’ excitement about the recent shutouts by the varsity football team.  The men’s water polo team recently won the Ohio Cup Championship and the men’s soccer team is currently undefeated.  Robards shared that the senior class is starting to focus on college applications with the support of DHS teachers and staff.

With no public participation at this time, the Board moved to approving new hires Nate Lamb (Mill Creek) and Elizabeth Kovarik (Creekside), and accepting the resignation of Wylie social worker, Rory Meyerink.