One play doesn’t make a game, but it certainly can define it. And when Antwan Ficklen returned the opening kickoff for a touchdown on Friday night against visiting Dearborn Edsel Ford, one could have easily defined the game as “over.”

Yes, just 14 seconds into the non-league game with the Thunderbirds one sensed the game was already “over.” And they would have been correct.

The Dreadnaughts scored on offense, special teams and even defense – all in the first quarter – on their way to a 64-0 win over the overmatched Thunderbirds. The 64 points are the most a Dexter team has scored since 1950 (see all of Dexter’s results).

The Dreadnaughts needed to order extra games balls after this one. The first one certainly goes to Ficklen, who not only returned a kickoff for a TD but also caught two touchdown passes from QB Colin Parachek. He finished the game with a total of 216 total yards – most coming in the first half. 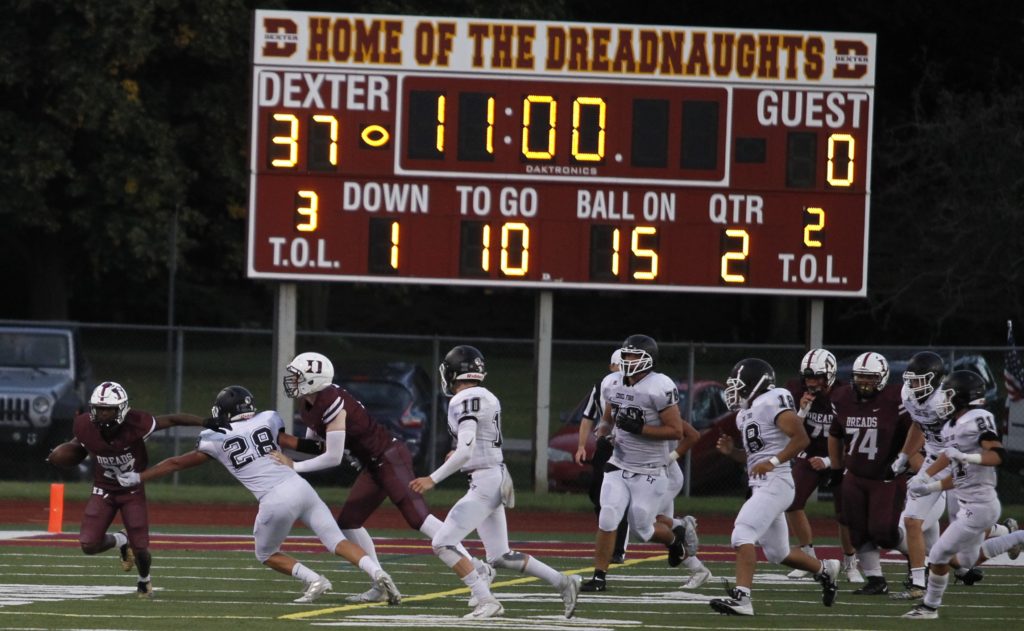 Speaking of Parachek, the outstanding junior quarterback finished 8 of 12 passing for 254 yards and four touchdowns. It was the second straight game in which he did enough in the first half to earn a rest in the second half.

And then there is Evan Krolewski. The junior running back rushed for 111 yards on 11 carries and ran in two scores. He also caught a 34-yard TD pass.

Since we are handing out game balls, hand one to the defense which pitched its second consecutive shutout. Dexter has outscored its last two opponents 104-0.

The Dreadnaughts face a much more difficult task on Friday when they travel to Jackson. The Vikings are 3-0 with wins over Ypsilanti, Adrian and Huron – scoring 127 points on the season.

Ficklen put Dexter on the board with a 94-yard kickoff return to open Friday night’s rout of Edsel Ford. Brady Keough made the extra point – he would convert eight of nine attempts on the evening.

On Edsel Ford’s first offensive possession, Alex Adams and Mark Young tackled Edsel Ford’s Ty Wyka in the end zone for a safety and a 9-0 lead. 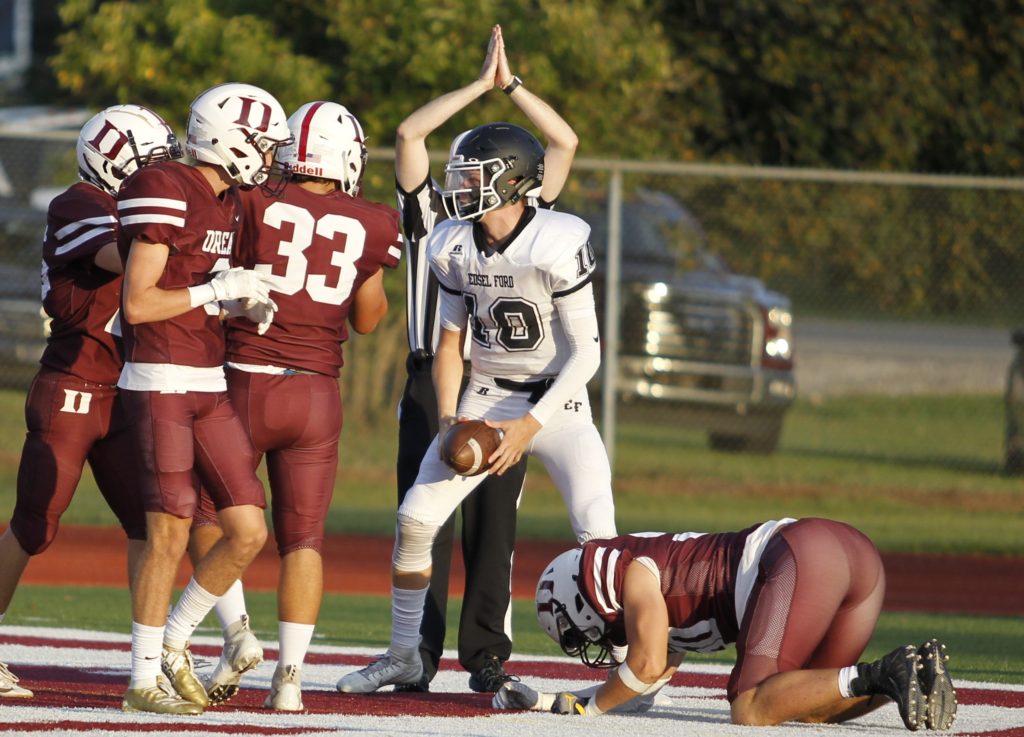 Parachek threw a 32-yard TD pass to Ficklen to push the lead to 16-0 and then tossed a 28-yard TD pass to Krolewski for a 23-0 lead with 7 minutes still to play in the first quarter.

In the second quarter, Krolewski scored on a six-yard run and Rhett Jacobs ran one in from two yards out to give the hosts a 50-0 lead with 3:07 left until halftime. The big play leading to the last score was a long pass to Bobby Pnacek, who made a nice catch and run for the Dreads.

After an interception by Blake Sislo, Krolewski ran one in from five yards out to give Dexter a 58-0 halftime lead.

Written By
Terry Jacoby
More from Terry Jacoby
Zoë Michos is a competitor. She’s a hard worker and has raced...
Read More