Tim Welbaum, a local combat veteran who marched 33 miles from the Visiting Angels in Adrian to the Ann Arbor Alzheimer’s Association’s Great Lakes Chapter to raise donations toward riding the world of Alzheimer’s, is a little sore but very proud of what his team accomplished on Saturday.

“The march went well,” says Welbaum. “It was painful and long, but the end state was accomplished and well worth the effort. We’re all still limping around, but I believe everyone should be fully recovered by the end of the week.” 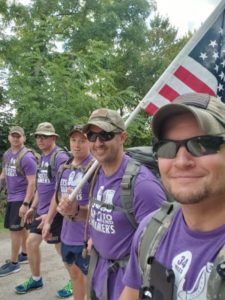 “We have approximately 80 days remaining to collect the remaining $50k,” says Welbaum. “Most of our money was made after our march last year, so we’re hopeful we can do it again with the help of others.”

The local group is currently in first place among all 650 plus Visiting Angel’s franchisees.

After fundraising from countless street corners under the blazing sun, hosting numerous bake sales, cheer leading about the march at the fairgrounds, being invited to interview on various radio shows, telling our story in multiple media outlets, and ruck marching 33 miles, they raised $35,000 last year – the most of any franchise in the nation.

This year, they’ve doubled their fundraising goal to $70,000.

Written By
Terry Jacoby
More from Terry Jacoby
It’s one of the biggest high school sporting events of the year...
Read More