Coming off of a third-place finish in the State Finals last year, the Dexter boys’ cross country team is looking at moving into the top spot in 2019 with a block of strong varsity runners and a fierce battle among the upper JV to move into the varsity lineup. After losing several strong seniors from last year, do they still have what it takes?

The answer is a resounding yes!

The first race of 2019 did not disappoint either the runners or coaches Drew Collette and Nathan Lamb.  The team moved up from the Blue Varsity to the Gold Varsity race at the Hornet Early Bird Invitational pitting Dexter against such powerhouse teams as Pinckney and Ann Arbor Pioneer and took first place by a mind-blowing 50 points. The final team score podium was Dexer Dreadnaughts in first place (66 points), Pinckney Pirates in second place (116 points), and Ann Arbor Pioneer (119 points).

“It was a hot day on a tough course, but everyone ran very well,” said Collette. “First race gives us a gauge and a starting point. No one set their season PR yesterday, we aim for those in October!”

So this is just the beginning and not anywhere near peak times. Nonetheless, the team had six returning runner personal records (PRs or all career fastest races).

There were plenty of highlights. 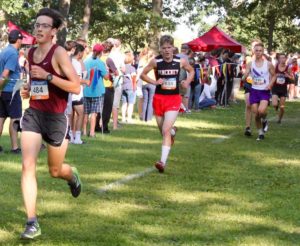 “Owen Huard took the favorite to win the state title down to the wire and came within 2 seconds of the Dexter HS school record,” Collette said. “Nathan Larson, despite not feeling well, ran an incredibly smart race for an excellent 3rd place finish. Finn Bell stepped up and finished in the top 5 for the first time in his career.”

If you have been looking, you’ve seen these boys running all over town and at the local parks. They have four weeks off training and work the other forty-eight, and as the coach says, “work equals results.” They also play hard and eat like Hobbits, two breakfasts, two lunches, and two dinners. They have as a team, also been pushing core and strength training. When you see a group of tall, slim guys in the GaGa pit at Creekside or playing Ultimate (Frisbee) in a field, chances are it’s this great group.

But let’s look at how far they have come in a year. Looking at each Dexter runner’s time from 2018 to this year’s results at the same race, the varsity runners from Thursday dropped 12:39 total time across ten athletes. That’s an average of a minute twenty-three each. Drilling down, the stand-outs are Seth read, Conor Kolka, and John harm for dropping over a minute; Owen Huard, Finn Bell, and Nathan Gariepy for cutting over a minute and a half; and the top honor goes to Josh Lamb for coming in two and a half minutes faster than in the same race last year. 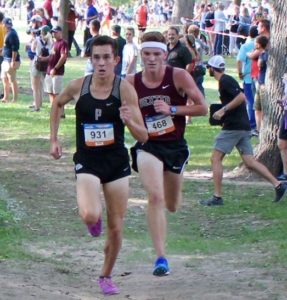 The reserve runners also made great individual improvements. The top six returning runners collectively beat their previous times by a crazy 13:03. Tommy DeRosiers improved by a minute and a half over last year; Zach Sawin, John Adamczyk, and Michael Tyler each dropped two minutes; while Griffin Bentley and Andy Jordan cut two and and half minutes off from 2018.

Here are the six new PRs from Thursday. Look for more great things to come from this group of Dexter Athletes.