It was fourth down at the Chelsea 4-yard line with 3:58 left in the game and Dexter trailing their rival and longtime nemesis by five points. The Dreadnaughts called time out. They had to get this chance right because there may not be another chance to get right.

Dexter quarterback Colin Parachek lofted the ball into the corner of the end zone. Chelsea defensive back Vinny Yado was able to get in front of Dexter receiver Evan Krolewski and intercept the pass – didn’t really matter as long as Krolewski didn’t catch it. But Yado outjumped Krolewski by an inch which was only fitting because this game was a game of inches where one play here or another play there would have altered the outcome.

In fact, it was Yado’s second “jump ball” interception of the game. Earlier in the second half, he intercepted a pass along the sidelines right in front of the Chelsea bench.

In the end, Chelsea made a few more plays than Dexter and that was the difference as the Bulldogs knocked off the Dreadnaughts 22-17 before a packed house at Al Ritt Stadium on a perfect Friday night for high school football.

After Yado’s interception, Chelsea had one more play to make before the clock would hit zero.

Chelsea faced 3 and 8 from their own 22-yard line with 2:03 left to play in the game. A stop here and Dexter would have close to 2 minutes to set up for one more chance. But the Bulldogs completed a pass for the first down to move the chains and keep the clock moving and keep the talented Parachek and Dexter offense on the sideline.

The Dreadnaughts would get the ball back but only with 18 seconds left – they simply ran out of time and Chelsea ran out onto the field to celebrate the school’s 24th consecutive victory over the Dreadnaughts. 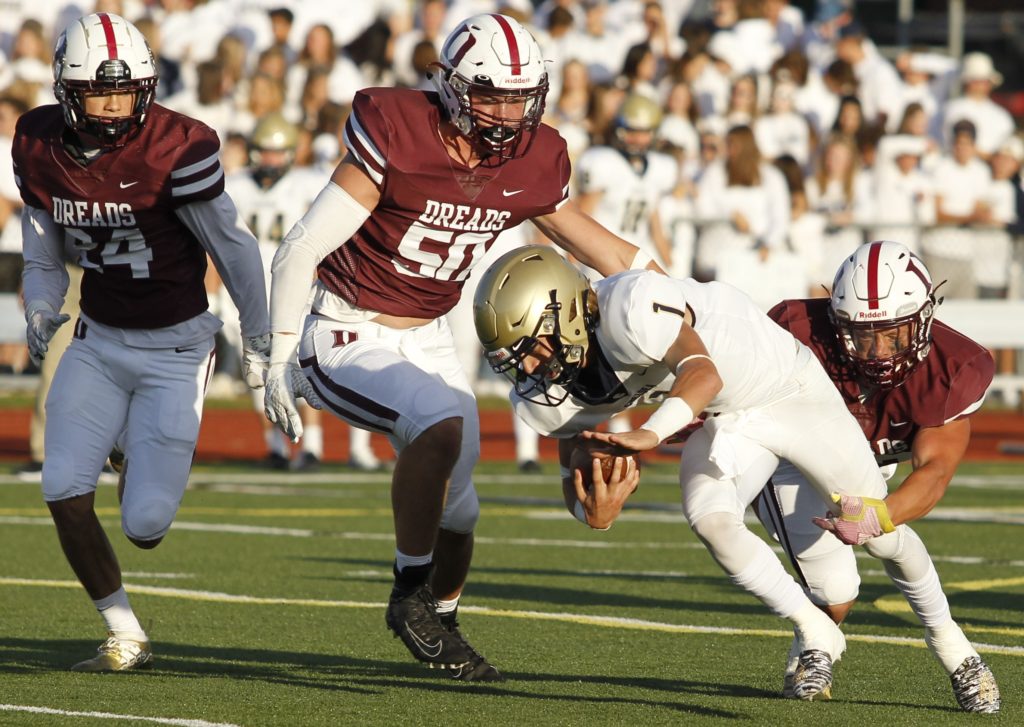 ON THE SIDELINES PHOTOGALLERY

This game was more about the present than the past. These were two very good and well-coached teams going head to head. Sure, there were mistakes – it was the first of the season, after all – but there also was some outstanding football from two teams that should be playing well into the postseason.

Chelsea senior QB Kyle Knight, who had a solid game behind center all night for the Bulldogs, hit Ross Stofflet IV on a third-down call for a 35-yard TD to make it 6-0. Chelsea’s extra point failed with 7:59 left in the first quarter. 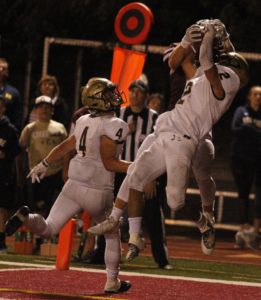 A nice kick return by senior Antwan Ficklen set up Dexter at the Chelsea 45-yard line to give the home team excellent field position. But the Bulldogs defense stood tall and forced a punt.

Chelsea’s Joseph Taylor returned the punt to the Dexter 30-yard line to put the visitors in a good spot for another score. An 11-yard run by Mitchell Reynolds, who raced around the left side and just beat Dexter’s Alex Adams to the corner of the end zone, gave the visitors a 13-0 lead with 4:48 left in the first quarter.

Dexter would answer quickly – the Bulldogs were not going to run away with this game. The Dreads got their first big play of the game when Parachek connected with Rhett Jacobs on a 55-yard TD pass to cut the lead to 13-7 with 3:27 still to play in the first quarter. Jacobs, the talented senior wideout, got a step behind Chelsea’s Lewis Alexander and Parachek delivered a perfect ball to put the Dreads on the board.

Another huge special team’s play – there were quite a few from both teams – set Chelsea up at the doorstep. Reynolds took the kickoff all the way to the Dexter 15-yard line and it looked like the Bulldogs would have an answer for the answer.

But the Dreads forced a huge turnover. With Dexter’s Jordan Watson and Mark Young both in the backfield, Chelsea fumbled a handoff exchange and Young jumped on the ball with 2:07 left in the first quarter to keep the Bulldogs from building their lead.

The Dreadnaughts took their first lead of the game in the second quarter when Parachek threw a 9-yard TD strike to his “little” brother, 6-5 freshman Brennan Parachek. The younger Parachek grabbed the perfect strike along the sideline and beat the Chelsea defender to the pylon, reaching the ball over and pushing Dexter over into the lead at 14-13.

It was the third time in a row the brothers hooked up at the end of that drive.

But the Bulldogs responded like Bulldogs usually do. Chelsea would retake the lead on a 25-yard field goal by Riley Sumner with 4:31 left in the half to give the visitors a 16-14 lead. While Chelsea put points on the board, give Dexter credit for keeping them out of the end zone with a nice defensive stand inside the red zone.

The back-and-forth was on as the Dreads would take the lead right back before intermission. A great catch along the sideline by Dexter senior WR Trevor Bazzy and another grab by Brennan Parachek took the ball deep into Chelsea territory. And Brady Keough kicked a 20-yard field goal with 1:26 left before halftime to put Dexter in front 17-16. Keough, the senior kicker, also was perfect on extra points in the game.

It was an exciting first half with plenty of emotion, action and points. 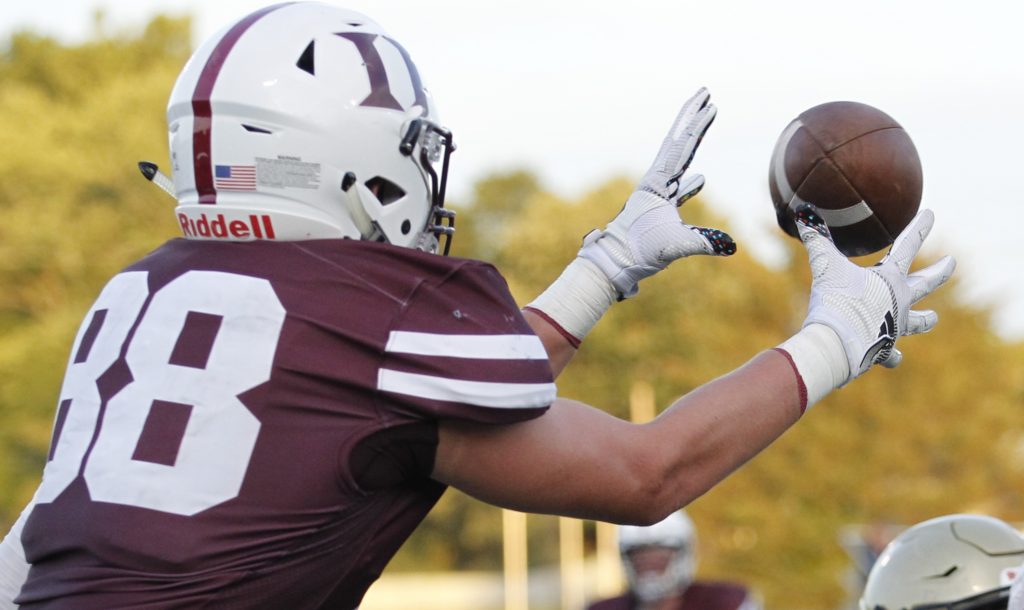 The second half was a similar story – minus the points.

Chelsea would score the only points of the second half in the third quarter as the defenses tightened. With 8:15 to play in the third quarter, Chelsea senior running back Brennan Van Riper ripped off a 12-yard TD run that ended up being the winning score. Van Riper, the senior running back, picked up a few nice blocks and went around the left side and into the end zone to give Chelsea a 22-17 lead (the extra point missed the mark).

Dexter got the ball at its own 15-yard line with 8:05 left to play in the game. And the Dreadnaughts started to make plays and began marching right down the field.

A third-down pass from Parachek to Parachek put the ball at the 31-yard line. A pass to Krolewski took it to midfield. Then, a nice catch and run by Krolewski ended with the junior fumbling the ball that Brennan Parachek recovered another five yards up the field at the Chelsea 27-yard line.

It started to feel like destiny for the Dreadnaughts.

A pass to Bazzy was good for a first down at the Chelsea 10-yard line. Another Parachek to Parachek took it to the 5-yard line. But then Yado stepped in to pick off Dexter’s potential winning play on fourth down.

Chelsea would pick up a huge first down – on a gutsy pass call – and help run the clock down to just a few seconds before punting the ball back to Dexter.

The clock ticked to zero. And the streak climbed to 24 straight. But the night belonged to two quality football programs, a packed house, a perfect night and one heck of a football game.