Kindergarten students from Anchor Elementary visited Creekside Intermediate last week to tour the Creekside gardens and deliver worms they’ve been raising over the past several weeks for the school’s composting program. 6th grade ambassadors from Ms. Korff’s class read each kindergarten class a story before leading them on an in-depth tour of the gardens. This opportunity is part of the Dexter Farm to School program, which also includes the Creekside Kitchen-Garden FLEX class and after-school garden club.

Since the end of April, Anchor kindergarten classes have been feeding storage bins filled with worms, preparing them to be released into the compost maintained by Creekside for use in the garden beds. Called vermi-composting, this process uses earthworms to increase the speed of the composting process and create a high-quality compost. Kindergarten students fed their worms once a week, bringing in leaves, eggshells, coffee grounds, apple cores and other appropriate items to keep their worms happy and healthy. One student was confident that his class’s worms will be great composters, exclaiming, “They’re amazing! This is going to be the best compost you’re ever going to have!”

When the kindergartners arrived, they were greeted by the 6th grade ambassadors who read them the story, “Diary of a Worm,” by Doreen Cronin, a fun story about a worm’s life. For those who may not know, worms don’t have to take baths, they can eat their homework and their head looks a lot like their rear end. After the story, which was a big hit, groups were taken outside for a tour of the garden beds planted and maintained by the students in the Farm to School program. 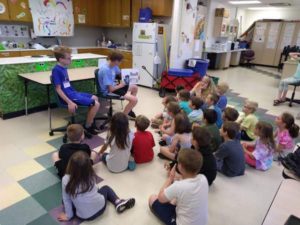 The eight student ambassadors, all of whom have participated in the Kitchen-Garden FLEX class and/or the after-school garden club, showed the younger students the many different vegetables and herbs currently growing in the gardens. At the herb garden bed, kindergartners were able to sample chives; some liked the herb, others not so much, but all agreed they tasted like onions.

The Creekside garden is in full production at this time of year, with sprouts of pumpkins, radishes, greens, beans, thyme, raspberries and peppers, just to name a few. A 6th grade ambassador shared with Anchor students, “One great thing about Creekside is that sometimes when you come in from recess, you can stop by the garden and grab a fresh raspberry on your way in.”

Anchor students and their teachers enjoyed the field trip to Creekside, especially seeing the gardens that will soon benefit from the worms they’ve raised. Anchor teacher Mary Leach commented, “I love to see it come full circle and the kids love it too.”

The Dexter Farm to School program partners with the Dexter school district to educate students about where food comes from and the importance of what they put into their bodies. Program coordinators Francie Wesorick and Lisa Babe work with teachers Kirsten Korff and Kelly Parachek to run the Kitchen-Garden FLEX class, the after-school garden club held in fall and spring and to maintain the Creekside garden. The Farm to School program also offers district-wide cafeteria food sampling and other special events to encourage students to eat more fruits and vegetables.

Produce raised in the Creekside garden is currently being sold at the Dexter Wellness Center on Wednesday mornings from 9 to 11 am (ending August 7th), and all sale proceeds go back into the Kitchen-Garden program. The Dexter Farm to School program is funded by a grant from the Dexter Wellness Coalition and the 5 Heathy Towns Foundation, and has been in partnership with the district for the past 6 years. The grant has been renewed for the 2019-2020 school year, and Wesorick and Babe look forward to continuing their work with students at Creekside and other Dexter buildings. 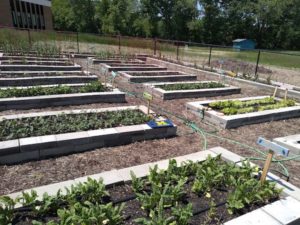