By most accounts, Rocco Havourd is your typical high school junior; he plays soccer, he’s the drumline section leader in his high school band, works a part-time job and is into robotics and RC vehicles.  He’s looking forward to his senior year and is starting to think about his college plans.

But, Rocco recently achieved something most 16-year-olds (and truthfully, most adults) have not and will not in their lifetime – on May 18, he received his 4th degree black belt in martial arts.  An impressive achievement for anyone who studies martial arts, but especially for one so young.

Martial arts has been a part of Rocco’s life for as long as he can remember.  When he was 3 years old, his parents enrolled him in a class offered through the Kidsland Montessori Daycare led by Master Brandon Lockman, owner of Master Lockman’s Black Belt Academy in downtown Dexter.  When his first Little Ninja class began, Rocco was too shy to join the others on the floor and began to cry.  This continued for the next few classes, until Rocco’s dad and Master Lockman came up with a plan for Rocco to become the instructor’s assistant during class and help out with the games.  Rocco was coaxed onto the floor and began his foray into what is now approaching 14 years of martial arts training. 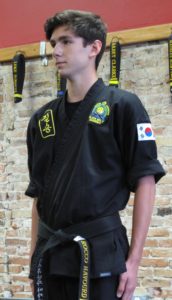 During his many years of training, Rocco has met and exceeded many goals available to students at Master Lockman’s academy.  He received his 1st degree black belt at the age of 7, his 2nd degree at age 9 and his 3rd degree at 12.  When he was in 2nd grade, Rocco became a STORM instructor (Student Team of Role Models) at the academy, assisting the head instructor during class, leading by example and helping other students perfect their technique.  He became a staff instructor at age 14 and was honored with a head instructor position in early 2018.

Rocco’s commitment to martial arts has been steady and unwavering.  For almost the entirety of his training, Rocco has attended class to train and/or instruct at least once a week, more often two or three times a week.  When asked why he’s continued for so long, Rocco said simply, “It’s fun.  And, when you do something for so many years, it becomes a part of you and you can’t even think of not doing it.”  Another possible reason might be that he shares his love of martial arts with his younger brother, Donato.  Donato has trained at Master Lockman’s academy for most of his life as well, and is currently a STORM instructor and a 2nd degree black belt.

For his 4th degree black belt, Rocco was tested for almost three and a half hours and performed nearly every pattern, speed drill and technique he has learned during his 14 years of training.  As a reference point, a student testing for their 1st degree black belt performs 10 patterns, 20 speed drills, 5 defense rules, 5 air shield attacks and 15 close range defenses.  Rocco demonstrated these, as well as all the patterns and drills learned during his 9 years training between 1st degree and 4th degree – approximately 150 techniques in total.

Most martial arts students would say the most fun part of any belt test is the board break.  At his 4th degree test, Rocco executed a bare-knuckle rear inward punch on a suspended board, breaking it on his first attempt.  He also performed a spinning reverse swing kick to break another suspended board, again on his first try.  As a test of power, higher-ranked students are asked to break 1-inch cement slabs.  Rocco demonstrated his power by breaking 7 cement slabs at once using a downward heel kick. 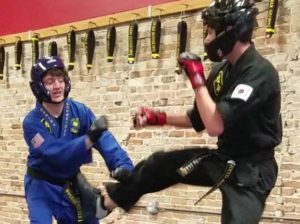 At the beginning of each class, Master Lockman’s students recite a promise and the tenets of kaizen karate (the style of martial arts taught at the academy).  One of the lines in the promise is, “to never misuse what I learn in class,” the most basic premise of martial arts; what you learn is to be used for defense, never for attack.  I asked Rocco if he ever had cause to use his training in a real-life situation, and he shared the following story:

“In middle school, a student in my class was being bullied and when he told the teacher, he was not believed.  I intervened on several occasions, telling the bully, ‘this is not how you treat people or how you are supposed to act.’  Finally, a situation occurred where I was physically in between the bully and his victim.  I put my hands up, palms out, and told the bully, ‘you need to stop!’  When he didn’t stop and continued coming toward me, I punched him in the stomach.  He didn’t bully that student anymore; and, it’s kind of funny, but now we’re friends.”

Rocco used his training in protection of a fellow student, standing up against what he felt were wrong actions and demonstrating one of the five tenets recited at the beginning of each class – integrity.  In his mind, integrity and courtesy are the tenets he connects most with – “I try to use them in everything I do.”

Master Brandon Lockman agrees, saying of Rocco at his promotion ceremony, “of all the tenets, integrity is the one Rocco demonstrates the most.”  Lockman also complemented Rocco’s dedication as a student and thanked him for being a reliable and trustworthy instructor.

In return, Rocco is grateful for all Master Lockman has taught him over the years.  “He is an incredible instructor and a great mentor,” Rocco shared, “I really look up to him.”

Congratulations, Rocco, on your outstanding achievement – or as they say in martial arts, Pil Sung!