Dexter High School’s monthly student-driven newsmagazine, The Squall, was recently recognized with the highest distinction, The Spartan Award, from the Michigan Interscholastic Press Association (MIPA) at an awards ceremony held in Lansing on April 23.

MIPA’s Spartan Critique competition allows member newspaper or newsmagazine, yearbook, video or website student media programs to get feedback from national leaders in their field. Participants may receive a Bronze, Silver, Gold or Spartan Award based on how well they meet MIPA’s student media standards.   The Squall was not only awarded the prestigious Spartan Award, but also received The Spartan Critique Seal of Distinction.

This seal, attached to the award plaque, recognizes student media outlets that are free of prior review and censorship.

And it’s not only recently that The Squall has been recognized for their outstanding work.  In 2002, MIPA launched its Hall of Fame to recognize student media with a tradition of excellence. To be inducted, a student media outlet must accumulate nine Spartans in a 10-year span.  The Squall was inducted into the MIPA Hall of Fame in 2012. 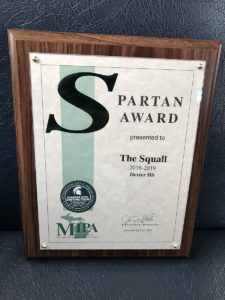 In addition to The Spartan Award, individual awards were received by the following Dexter students for their exceptional work:

Congratulations from WeLoveDexter to these students and the entire staff of The Squall for your outstanding achievements!