Approaching the Creekside Media Center last Monday night, a low murmur of voices could be heard through the closed doors.  Upon entering the room, attendees of the May 6 Dexter Board of Education meeting were immersed in a sea of yellow vests.  The Dexter Lions Club was out in full force, supporting their own Louie Ceriani, whose name will appear on the new alternative education building currently under construction at 8100 Shield Road.

Board President Michael Wendorf welcomed meeting attendees and guests saying that during the course of their business, the board sometimes, “has an opportunity to leave a lasting legacy, and this is one of those evenings.”  Superintendent Chris Timmis then presented the Facilities Committee’s recommendation that the new alternative education building be named after Louie Ceriani, DHS Class of 1948 graduate and longtime school supporter.

Ceriani was asked to join President Wendorf at the front of the room, where Wendorf spoke fondly of Ceriani’s many contributions to the school and the city of Dexter, as well as his perseverance after a rough start to his life. 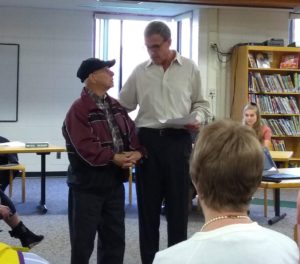 After being made a ward of the state at 18 months, Ceriani was placed with an abusive foster mother in Dexter until her death when he was 16.  Despite his foster mother’s cruel treatment, Ceriani maintained a positive outlook.

A freshman at age 16, he was behind other students his age in school due to several operations on his feet and hands throughout his childhood, but was encouraged to stay in school by Dexter High School coach, Don Wilbur.  Coach Wilbur made Ceriani team manager of the football, basketball and baseball teams and Ceriani previously said that “if there wasn’t [that] incentive for me, I probably would have dropped out.”  Ceriani graduated in 1948 at age 21 through the alternative education program.

After graduation, Ceriani worked for and retired from longtime Dexter business DAPCO Industries, which is also where he met his wife, Maria.  Ceriani has been a member of the Dexter Lions Club for 40 years, raising tens of thousands of dollars in scholarship money for Dexter’s alternative education students.  He has served three terms on Dexter City Council and is a lifelong member of Dexter United Methodist Church.

Wendorf closed his remarks saying that throughout his life, Louie Ceriani has embodied the importance of hard work, perseverance and of being a good and loyal friend.

Ceriani received the board’s recognition and praise with humble thanks.  He thanked God for being with him the whole way, as well as his family and friends for supporting him throughout his life.

Board member, Dick Lundy, then made a formal motion, “that the Dexter Board of Education name the new construction at 8100 Shield Road the Louie Ceriani Building.”  The board voted unanimously in favor and applause filled the room as Ceriani shook the hand of each board member in turn.

Friends and family surrounded Ceriani as he left the meeting, shaking his hand and clapping him on the back, celebrating him and his many contributions to Dexter.