There is tired – and good tired. It’s not a thin line that separates the two. Sometimes, an entire stage – one filled with dreams and ambition – is the difference being tired and good tired.

Good tired is drenched with satisfaction. Of being exhausted yet excited with the road that got you there. One of accomplishment. One of fulfillment.

That’s how Drew Flattery often feels when he steps off the stage after a long day – and night – of rehearsal.

“Being the Dexter Drama Club is a lot of fun,” says the Dexter HS senior. “It’s also a lot of work. We’re called until 7 most days, but being with my friends and being able to sing, dance and act that whole time makes the long hours very enjoyable. And tiring at times.”

But a good tired.

Flattery is playing the lead in Dexter Drama Club’s “Little Shop of Horrors” which opens next Thursday (May 9). He’s playing Seymour Krelborn, the lovable yet nerdy protagonist who buys a strange and interesting plant that brings him fame and fortune but at a deathly cost.” 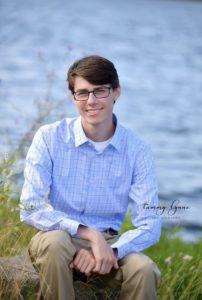 It’s not only a role he’s born to play, but more importantly, born to sing.

“My favorite part about Seymour is all the songs I get to sing every day,” he says. “One of my favorite things about the show is the music. Though, my biggest challenge I’ve been facing has been the music I sing, as it’s out of my range. Combined with the fact that I’m in pretty much every scene and have no breaks, it gets really hard to sing the high notes. But I have been working and overcoming this challenge, and I’ve made a lot of progress.”

A lot of progress after many good tiring days of rehearsal and practice and fine tuning.

“Rehearsals have been going very well,” he says. “I’ve been having a lot of fun rehearsing every single day and acting with everyone in the show. At the point of writing this, we only need to block one more scene and we’ll have blocked the whole show.”

The whole show features an amazing cast and Flattery is flattered to be amongst such a hardworking and “absolutely perfect” cast of performers.

“I’m my opinion, the cast is absolutely perfect,” he says. “I couldn’t have chosen any better people to play these characters if I were to do it myself.”

Tell us about the cast, Drew.

“John Carlson is hilarious as Mr. Mushnik, the shop owner of the plant store Seymour works at,” he says. “Mattie Seagraves is an amazing blend of satirical and sincere as Audrey, Seymour’s love interest. Ben VanderHyde is suave and absolutely hysterical as Orin, the creepy dentist and Audrey’s boyfriend. Francis Fifelski is booming and creepy as the voice of the man eating plant set on world domination. And Elise Reich, Kesley Walter and Eliza Colby are beautifully singing and harmonizing as the three do-op girls, the powerful, seemingly omniscient woman who narrate the story.

“I’ve had so much fun working with all these people and the rest of the cast and they’ve all made this experience 10 times better.”

Flattery doesn’t remember when he first stepped on a stage – just that it seems like a place he’s always felt comfortable being on, especially with a microphone in his hand. 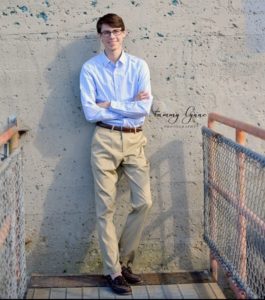 “I’ve just been doing theater ever since I could remember,” he says. “I think I did my first show in fifth grade at a children’s theater in Ann Arbor, and I’ve done a show every year since then. In eighth grade, I officially joined the Dexter Drama Club and have been doing shows here ever since.”

This year past year, Flattery was in both “Oliver” and “Peter Pan” at the high school with the drama club. In “Oliver,” he played the nasty villain Bill Sikes, and in “Peter Pan,” he played Mr. Darling, father to the Darling children and the crocodile that (spoiler alert) eats Captain Hook.

“I think what drew me into theater was that I was able to take on a whole different character and become a new person entirely in a scene,” he says. “Then when I started doing musicals I was completely hooked as I absolutely love music, especially theater music.”

Drew, the son of Dorthy and Kevin Flattery, also is performing well in the classroom. He has a 3.7 GPA and also participates in the school’s Improv Class.
He is committed to Western Michigan University where he plans on studying computer science.

“Theater is a very fun hobby that I want to keep doing,” he says.

A fun hobby, but sometimes tiring – a good tiring.

Written By
Terry Jacoby
More from Terry Jacoby
At the start of the fourth quarter, the packed Dexter student section...
Read More