It’s time to stroll Main Street in Dexter again. The Art teachers representing all schools in Dexter, grades Y5 – 12, have selected over 250 pieces of student art; both 2D and 3D, to be displayed in local businesses from April 30th through May 20th for the 6th annual ArtWalk.

The idea of an Art Walk came to the Art Department after searching for one central location to have student art viewable for longer than just one weekend.

Originally, the teachers used space in the hallway above the Media Center at Dexter High School beginning in the spring of 2002, and held the show one weekend only when the Music Department held their annual Band Extravaganza.

The amount of effort and hours to put up a display for only 2 1/2 days did not make sense to the teachers, so they moved the Art Festival to the Copeland Theater. This venue coincided with the Drama Department’s spring performance. However, while the art work was able to be on display for two weekends, the lighting wasn’t optimal for viewing and the hours to view the art were limited. So, after a few years there, the Art Department decided to rethink the whole Art Festival. 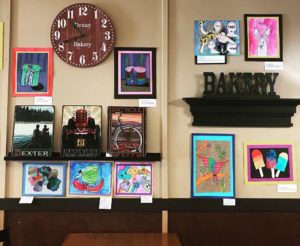 “We talked about how to involve the local community and discussed if we could pull off a show similar to the Youth Art Month shows in storefronts in bigger cities like Ann Arbor,” says Creekside’s 5th & 6th grade teacher, Jane Montero. “Our concern was about the sunlight fading student art and losing its impact. So, we decided to go door-to-door one fall afternoon asking local Dexter businesses if we could use their walls and shelves to display student art.”

With a handful of willing businesses in the spring of 2013, and and a new name, the ArtWalk  began. This year, we have student art inside ten local businesses, one being the Dexter District Library. If you happen to be in town during the next 28 days, please take some time to walk inside the following places to view our outstanding art for 2019: Aubree’s Restaurant, Dexter Bakery, Dexter Creamery, Dexter District Library, Dexter Pub, Hackney Hardware, Hearts & Flowers, PNC Bank,Revive, TCF Bank. 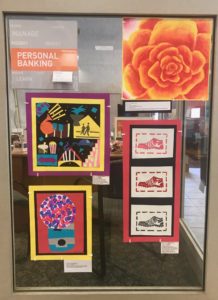 The Selection and Preparing Process:

“The selection process really begins after the first few projects have been completed in the fall, but final decisions are not made until early April,” says Montero. “We look for strong ideas, a commitment to craftsmanship, and a dedication to the creative process.”

Each school building is represented and everything gets sorted out for designated businesses.

“When we first began this Art Walk, we had no idea how many pieces could fit in each business,

nor how the art work would actually hang on some of the old brick walls,” Montero says.

business. Then they decide who is going to which businesses to set up the displays.

“On our actual ‘hanging day’, which is typically a Friday after school, we know where each of is going to start, and we keep our cell phones handy for communication. If some pieces don’t fit in

one place, we move them to other stores. It’s a bit of a guess every year as to how many pieces will actually fill the walls because we don’t limit the size nor medium. Then on Saturday morning, we try to confirm all art locations and the show is good-to-go after that. Once the show is set, students and families receive letters stating what piece of art is in the show along with the business where it is displayed,” says Montero. 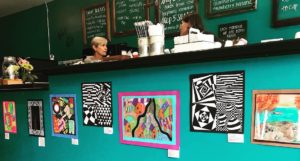 A Sense of Pride

There’s always excitement in the air when the Art Teachers, armed with their portfolios of student

work, quickly move up and down the street, popping in and out of stores.

“Being a new addition to the ArtWalk, I can really see the joy, excitement, and sheer pride that crosses a student’s face when their work gets chosen for the show,” says Dexter High School Art Teacher, Krickett Luckhardt. “It’s an honor to be able to give them that feeling of ccomplishment. It shows the community that our students are imaginative, creative and exceptional in a unique way.”