Spring has brought much activity to the Border-to-Border Trail (B2B)! Take a look at what has been happening from tree planting to grading to bridge work.

Stockbridge/Lakelands Trail – Upgrades on the Stockbridge component of Mike Levine Lakelands Trail State Park from M-52 to the Ingham County Line have begun. The project includes asphalt installation in the village itself starting at M-52 east to M-106. Beyond that will be a 10’ wide crushed aggregate surface, similar to the improvements being made in Unadilla Township and in Jackson County. Construction on the M-52 to Ingham County Line segment is expected to be complete in mid-July.

Dexter-Chelsea Trail, Freer to Lima Center – The Contractor has completed both bridge concrete abutments and the bridge will be delivered and set in May. The Contractor has also started work on the path grading, placing the stone base. (Main photo and right)

Lyndon Township Trailhead – Design work is being finalized and the required construction permits have been secured. The tree removal work is 90% complete and project will be sent out to secure bids later this month.

M-52 Trail and Tunnel Project – The plans have been sent to MDOT for their review and project documents are being finalized so we can advertise the project for a May bid opening. 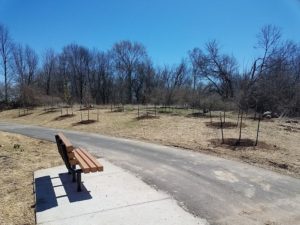 Van Buren Township Trail Alignment Study – Our consultant, Professional Engineering Associates (PEA), held public information meetings in both Van Buren and Ypsilanti Townships in April to gather public input on the various proposed alignments. On April 16th, the Van Buren Township Board approved an alignment which will connect Washtenaw County to the City of Belleville and the Lower Huron Metropark at Haggerty and Huron River Drive. The approval of the Iron Belle Trail (IBT) alignment in Van Buren Township will allow for funds to be secured to construct the numerous segments along this alignment in 2020 and into the future.

The completed B2B will feature The Huron River Greenway with eight themed bridges spanning the Huron River between Ann Arbor and Dexter, and The Huron Waterloo Loop, a continuous 44-mile pathway passing through the Waterloo and Pinckney State Recreational Areas and including a portion of the existing Lakelands Trail. By connecting and showcasing our communities, the HWPI hopes to encourage healthy and active lifestyles, while also promoting economic development.

Huron Waterloo Pathways Initiative (HWPI) volunteers are working with the Washtenaw County Parks and Recreation Commission’s (WCPARC) Border-to-Border Trail (B2B) team, the Washtenaw County Road Commission (WCRC), and other state and local government agencies to develop new non-motorized trail segments. With the support of the entire community, these trail segments will ultimately complete the B2B throughout Washtenaw County and beyond. The B2B is part of the Michigan Iron Belle Trail, a state-wide trail system. Check back often for trail project updates!