The Dreadbots entered day two of the world competition in Detroit on Friday in excellent position. Their field, Curie, appeared to be the toughest of the six fields at Cobo, but with their 5-0 record, the Dreadbots were ranked tenth out of the 68 teams.

As other teams shifted in the rankings, before they even played their first match, the Dreadbots climbed to eighth.  Since the top eight teams select alliances, this would guarantee the Dreadbots a playoff spot if they could hold it.

Their first match saw a clash of multiple top-10 teams on the two alliances, and the Dreadbots received their first loss, dropping them to 12th in the rankings.  In their second match, an alliance partner’s robot had serious mechanical problems, and the resulting loss pushed the Dreadbots down to 16th. 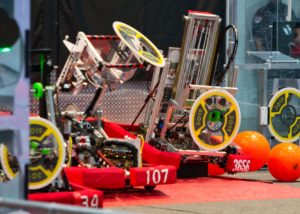 A win in the third match left the Dreadbots’ position in the standings unchanged initially, but as other teams played, they rose to 15th.

Dexter’s fourth match chalked up a first for them this season – it ended in a tie, and the team held its position at 15th.  Shakeouts in the rankings moved them up to 13th.

The Dreadbots had the last match of the day, and they won it in a nail-biter.  The victory moved them to 12th overall, with a record of 7-2-1.  This leaves them in excellent position to make the playoffs.

Alliance selection for the playoffs will take place on Saturday. Victory in the playoffs on Curie field would move them to Ford Field, where the victors from each field will compete.

All photos by Dan Robelen