The Dexter girls’ soccer team had to set a record. Someone grab the history books and start turning the pages because the Dreadnaughts turned what had to be the quickest goal in school history Thursday in their 4-1 win over host Pioneer.

In just 14 seconds into the game, Dexter’s Abby Tamer took a pass from Carly Curry and fired a shot into the Pioneer net to make it 1-0. It happened so fast it was difficult to see exactly what happened but Tamer found herself wide down the middle of the field and hit a perfect strike that the Pioneer keeper had no shot at stopping.

Tamer just returned from Germany where she played field hockey for the U.S. National Team.

The rest of the game was well played on both sides of the pitch. Both teams battled hard and while physical, the game never got dirty or rough. Both sides also showed very good possession skills at times as they moved the ball not only up and down the pitch but side to side.

SEE 150 PHOTOS IN OUR GALLERY

After the shock of the first goal, the host Pioneers squared things. Sophomore Kosisonna Nweze scored the equalizer at 24:59.

But the deadlock didn’t last long as the quick-strike Dreads struck again. Just over a minute later, Curry scored off an assist from Annika Brodersen to give the visitors a 2-1 lead.

At the 12 minute mark of the first half, Dexter’s Bri Pederson scored a beautiful goal off a pass from Zoe Murphy to push the lead to 3-1. 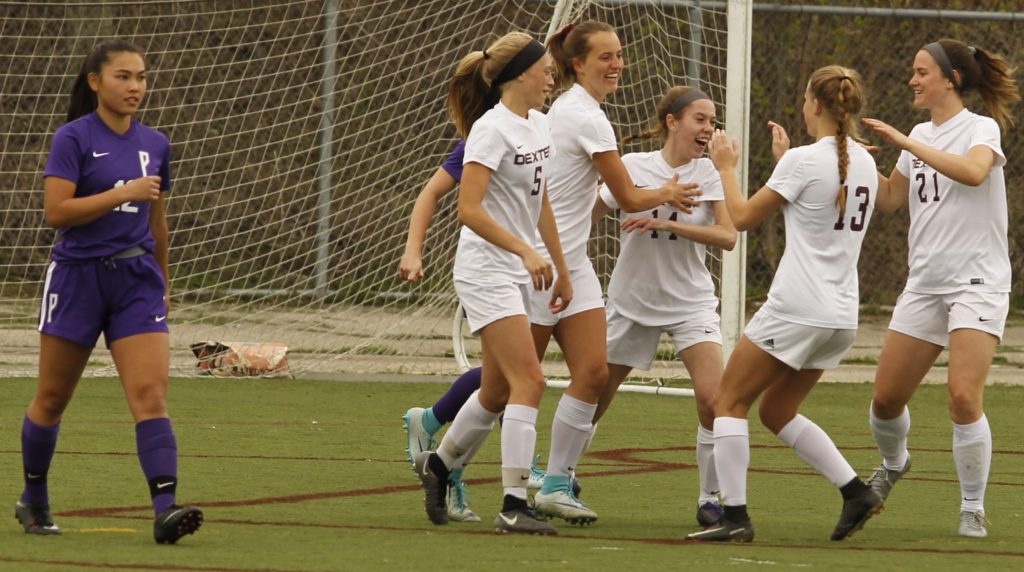 Both Dexter and Pioneer are young SEC teams. The Pioneers were dealing with a number of injuries while Dexter was playing its third game in four days.

“Being able to bring in seven substitutes with fresh legs playing at a high level gave us a major advantage over a short bench for Pioneer,” Dexter Coach Jamie Lewis said. “I was really happy that we kept our momentum and were able to give some kids the opportunity to contribute and they came up big.

“Captain Bri Pederson’s goal before the end of the half from Zoe Murphy off of a Kylie Cabana corner was a huge lift and then the clinical finish by Lauren Boydston after a perfect slip pass from freshman Nya Mahoney essentially put the game away.”

Lewis can already see his team starting to come together and reach for that next level he knows is there with this club.

“I can certainly say the season started out very rough as far as teamwork and attitude, but the kids are really starting to play for each other and there is less talk about “me” and a lot more talk about “us” which is changing how we practice and play in a really positive way,” he said. “The genuine excitement for each other when things go well, and support for each other when dealing with adversity has made a huge difference.”