The Dexter High School track and field team hosts the 27th annual April Showers Relays on Saturday. The first event will take off around 9:30 a.m. with the event “running” well into the late afternoon hours.

This year’s event features a slight change in direction.

“It changed this year from less of a relay-event meet to a more traditional track and field meet based on a decision that more teams are looking for individual times rather than relay times,” said Dexter head coach Alex Heidtke.  “With 34 teams, most of the events will be incredibly competitive. It’ll be a fun meet, but it looks like it might be a bit cold and rainy.”

The weather doesn’t look good at the moment with a predicted high of 48 degrees with a “steady” rain starting in the morning. But this is Michigan, and the weather can change on a dime. This meet is a “rain or snow or shine” event. Hopefully, snow will not make an appearance. 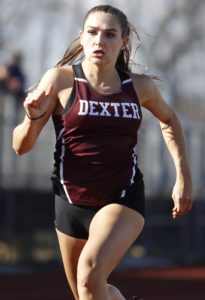 “This meet is happening regardless of the weather,” says Heidtke.

With all these teams parking could be an issue (see map below). Heidtke recommends parking at one of the other schools and walking down to the stadium. Bates and Wylie tend to be solid options. The only entrance will be the main one, all other gates will be locked.

Written By
Terry Jacoby
More from Terry Jacoby
Coaches, swimmers and fans will tell you that these are the fun...
Read More