Two things stand out from last year for Dexter soccer player McKenna Graham. The first one is pretty much a given for anyone playing Dexter sports. The second one isn’t surprising considering the player doing the talking.

“One of the biggest highlights from last year was beating Chelsea in District finals in a PK shoot out,” says McKenna of the joy it brings any Dreadnaught in beating that team to the west. “Another big highlight was being so close to my teammates and being able to make a lot of great memories on the bus rides to and from games.”

McKenna, now a senior, has already collected plenty of highlights as a soccer player but the ones she cherishes the most happen off the pitch. Again, take last year for example. She had already played briefly on varsity as a freshman and then started as a sophomore as the team enjoyed great success those two years. But last year stands out beyond the wins, loses and trophies.

She keeps one eye on the ball and another on the big picture. 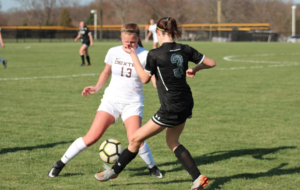 “Last year as a junior, I started as a center mid and it was probably the most fun I’ve had so far,” McKenna says. “I became much closer with many of the girls. We were a very solid team that was able to compete with every team. It was hard to say goodbye to all the incredible seniors that I had become so close with and that were key players on our team.”

Despite being successful in the league and winning another District title – did we mention they beat Chelsea in the finals – the season didn’t exactly end on a high note for a program with a tradition of long postseason runs.

“Yeah, the playoffs were a huge disappointment,” said McKenna. “We only made it to Regional semifinals which was heart breaking because we had the talent to make it further.”

This season, McKenna is anchored at one of the key positions on the pitch: defensive mid. Strong defense leads to fewer goals which leads to more wins – sounds pretty simple, but of course, it’s not.

“Our goal is to ultimately make it to state finals and to win,” she says, which seems to be the goal every year at Dexter. “The key for our team this year is to get better every day and learn how to all play together. The personality is much different than last year as about half of our team graduated. We’re still figuring out the personality and chemistry of the team, like where players can play and dynamics of how we want to play.”

McKenna started her Dexter career on JV but was called up to the varsity for the postseason matches. “It was a great experience and I had a great time after being pulled up and was excited I got so much playing time,” she said. 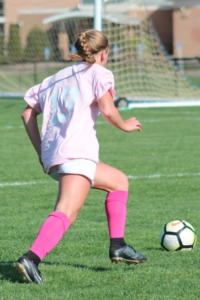 She started at right mid as a sophomore. “This was also a very solid year for us as we made it to Regional finals,” she said. “We had many great players that were fun to play with and made for a very competitive and successful season but was sad when we fell short in the playoffs.”

McKenna first started playing soccer when she was 4. She liked that the great game of soccer was a team sport in which everyone had a role on the team. “I also used to play softball but stuck to soccer because it was faster pace which I like,” she said.

McKenna played club at Dexter Soccer Club for around six years and has spent the last six years playing for the Michigan Hawks.

Not only is this McKenna’s final year at Dexter but she also is one of the team captains.

“I try to keep a positive attitude and try my hardest when I’m on the field to encourage others and set the tone of the game,” she says.

McKenna, the daughter of Amy Graham, will continue her soccer playing career next year at Albion. “I chose Albion because of the great school and nursing program that they have as well as the great soccer program. I can’t wait to play for their soccer team and for the coach, Eric Scott.”

But right now she is focused on playing and helping lead the Dreadnaughts – with one eye on the ball and another on the big picture.