Anna Robelen is wise beyond her years – and the proof is in the quote.

“Oh, well, best to do things when you have time, and I had time : ) ” says the Dexter junior when asked to talk about her habit of doing things right away. And – yes – that is her smiley face.

There are plenty of smiley faces to flash when it comes to Dexter’s amazing Dreadbots, the schools’ FIRST robotics team. Anna, like many of her teammates, was first introduced to robotics in middle school. And, again like her teammates, she’s been smiling ever since she joined.

“I attended the Dreadbot’s Dexter Library outreach, where Sierra Lindskov showed me some of the magic of FIRST robotics,” says Anna, who admits that “robotics was a slightly scary thing for me, at first.

“I was an introvert who was practically new to the school after being homeschooled my whole life, so the whole thing seemed much larger than I had originally anticipated,” she says. “After spending enough time with the team, however, I came to realize that the majority of them are introverts as well. In the end, we were introverts pretending to be extroverts for short amounts of time, which was fun.”

See, wise beyond her years.

During Anna’s first year on the Dreadbots she was on the programming team, which makes the robot move on command. This year she is on the electrical team, considered the bridge between programming and mechanical.

“Without the electrical team, we wouldn’t be able to have electronics on our robots,” she says. “I am also the back-up Human Player for the drive team, which means that I would take up the mantle if anything happened to our main Human Player.”

Robotics is about many things – including creating something out of nothing, working as a team, building social skills and making new friends. But it also goes beyond the walls of the high school.

“I have participated in several events to help the community and spread awareness about FIRST,” Anna says. “For example, we have helped the Lions Club set up and sell trees, and I have aided in running this year’s Anchor Stem Night.”

“I think we have been successful because of the long hours of teamwork, sweat, tears, and blood we pour into the team year-round,” she says. “Even if we have arguments (as teens do), we have to work together to ensure the team’s success.”

She stresses the great thing about robotics is the comradery.

“I can walk into a room with dozens of cheering teams, and know that we have had similar experiences,” she says. “That we all had to use our creativity to manufacture a complex machine that fits inside the rules. Another highlight for me is the time spent just hanging out, laughing, with my fellow roboticists.”

And what if she were recruiting someone to join the Dreadbots?

That’s exactly what Dexter did this past weekend at States – they buckled down and worked hard. And it paid off. 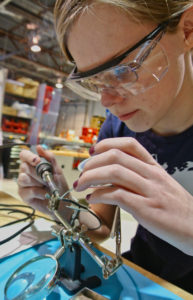 “Over two days I volunteered to spend about 10 hours of time in the pit; the place where the robot is repaired between matches and where inter-team relations often start,” she says. “While it is tiring, it brought great satisfaction because at the end it felt as if I had benefited my team by ‘selling’ the robot to the judges and by allowing other people to spend more time in the stands.”

So it’s onward and upward for the Dreadbots. Cobo Hall is calling and 399 teams will be waiting for them.

“My goal for Worlds is to spend more time in the pits,” she says. “Though, as we only have eight qualification matches I will try to catch as many of those as possible. The great thing about worlds is the wide variety of people to talk to, and there should be many opportunities to discuss things with them.”

Anna, the daughter of Dan and Wenonah Robelen, was homeschooled until she started taking electives in eighth grade and began going to the public school full-time her sophomore year of high school.

She plans on attending Pensacola Christian College in Florida after she graduates from Dexter.

“This college has personal ties to me and my family, as my parents went there and I was born in the area,” she said. “I plan to get a minor in music and major in mechanical engineering while at Pensacola. After receiving both of those degrees I would like to go to a university to specialize in aerospace engineering.”

Wise beyond her years!