Kylie Cabana has come a long way since her first soccer game. Parents of young kids giving soccer a kick for the first time can certainly relate to Kylie’s first time on the pitch.

“I just stood in the same spot for the entire game,” she says.

Join the club, Kylie. Watching kids play soccer for the first time is both entertaining and frustrating for parents – who can often be heard yelling “move, spread out, go get the ball, WHY ARE YOU JUST STANDING THERE?”

“It was a huge disappointment,” says Kylie – insert smiley face!

The Dexter junior was just 4 years old when she first stepped on the pitch and a lot has changed over the years but her love for the sport was instantaneous.

“I’ve loved every second of it,” she says now. “My favorite thing about soccer is that I just get to be myself. Everything else that is going on just goes away and I can just focus on soccer, it’s so fun. And I love competing. It’s in my blood.” 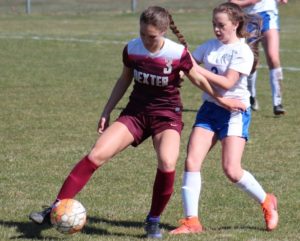 Her competitiveness and drive and skill landed her a starting spot on the Dexter varsity team as a freshman. Despite having to play a new position on a new team, everything worked out just fine for both player and team.

“I made varsity my freshman year where I played defensive center mid for the first time,” she said. “I learned a lot in my first year and earned a lot of minutes, starting every game.”

The Dexter girls’ soccer program has long been an elite team and Kylie’s freshman season was no exception.

“Our team was very talented as well and we had a great season,” she says. “We were very successful and won our league and districts, and made it to the regional finals.”

The Dreads ended up losing to Marion in the Regional finals that year. Marion went on to win the state finals.

“That didn’t make the loss any easier though,” says Kylie, who was All-SEC, All-District and Team Defensive Player of the Year last season for the Dreads. “And even though I was only a freshman, it was definitely one of the toughest losses I’ve experienced.”

Dexter had a very similar team during Kylie’s sophomore year. Despite having a new coach, the Dreads continued to kick up plenty of success. They again won the SEC White Division and Districts before falling in the Regional semifinals. 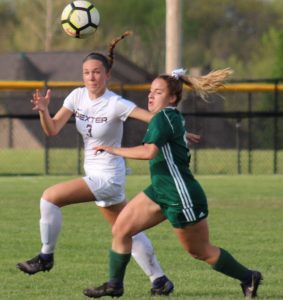 “It was a tough loss, as would any loss be in the postseason, but we still had a great season,” said Kylie, who finished with All SEC and All District honors. “The memories we made will be unforgettable.”

Overall, it’s been a great start to her high school career.

“I’m very happy with my first two seasons of high school soccer because of the team’s success as well as mine,” she says. “I am especially grateful that I’ve been able to have a large role on the team every year, and I think that everything that has happened the past two years can help me make my team successful again this year.”

Speaking of this year, the Dreadnaughts have a new coach and a lot of new faces – but the same Dexter soccer goals.

“This year we are a really new team with a lot of young players, so I think we are still trying to find our personality,” Kylie says. “But our coaches have talked about how this year isn’t a rebuilding year, it’s a reloading year. So with time we will find our personality.”

Kylie, who plays both center back and defensive center mid this season for the Dreadnaughts, says the focus early in the season has been on the defensive end. Preventing goals is a great way to prevent losses.

“If we can learn to stay connected as a back line and stop really good teams from scoring, we will have a great season,” she said. “But being confident is also a huge key this year. We have to know we are a great team and we have to play like it. And finally communication is huge too. Great teams have great communication.”

Kylie plays for the Michigan Hawks and has been playing club soccer for about 10 years. 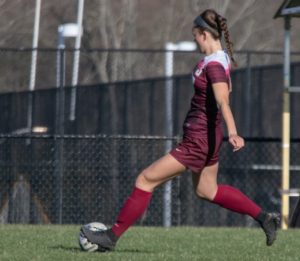 “I started in the Community Ed program and then went to Dexter Soccer Club where I played on many teams, both girls and boys,” she said. “I even played on two teams for a while, one my age group and one a year older. I had great experiences at Dexter Soccer Club, but at the age of 11 I decided to play for the Michigan Hawks and have played there ever since.”

Kylie is taking more of a leadership role this year. Now an experienced junior, she was named one of the team’s captains for this season. “I love it,” she says of being captain. “I’ve always been a really vocal leader so that’s probably my biggest role as a captain this year. Leading by example is something that is important to me as well. Plus the coaches hold me to high expectations which have really pushed me to be better all around.”

Kylie, the daughter of Holly and Mike Cabana, also scores goals in the classroom. She has a 4.0 grade-point average and is a member of the National Honor Society. She also was All-SEC as a sophomore on the girls’ varsity basketball team.

Kylie hopes to play at the next level and has already begun the long process of figuring out her college plans. “I have several offers from some D1 schools right now and I also am still in my recruiting process talking to other schools at all levels,” she says. “I’m just trying my best to be patient with the whole process so I can find the perfect school for me in both academic and athletic aspects.”

Right now, she has a ship to help captain and a team to help lead – she’s come a long way since standing in the same spot.