There are a lot things about Abigail Tamer that need repeating.

“Yes, I am missing three games this week for our trip to Germany,” says Tamer. “We leave Monday and get back next Monday.”

This is Tamer’s first year on the National Team.

“There is a program called Futures and it is essentially the Olympic development pipeline for field hockey,” she said. “I have been doing Futures for three years now. This is my first year at the U16 level and there are multiple tryouts after Futures that you get selected to, all leading up to the U17, U19, U21, Developmental, and Senior Teams depending on ages, and I made the tour team for the U17 age group.” 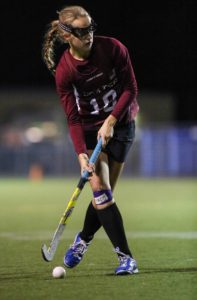 Tamer has been First Team All-State her first two years on the Dexter field hockey – as one would expect.

One of the ways Tamer prepared for the trip to Germany was playing soccer for the Dreadnaughts and as excited as she is to play field hockey in an international tournament, she’s equally as excited to get back and help lead the Dexter soccer team to accomplishing some of their goals.

And those goals are?

“This year our team is young and we haven’t quite figured out our personalities,” says Tamer, who is seeing time at attacking midfield, forward and defensive midfield. “There are still moving parts within our team. We have a lot of fun during practices.

“I think for our team to achieve our goals we try our best to communicate with each other and stay on the same page. We have been working on a lot of defense so far this year so we have developed better communication in that aspect of the game.

Last year as a freshman, Tamer played primarily forward and a little bit of defense. The Dreadnaughts won Districts (although she wasn’t there due to field hockey) before losing in Regionals.

“We had plenty of experienced seniors who really contributed to the team’s success,” said Tamer, who earned All-SEC honorable mention. “I improved a lot throughout the year due to the experience we had on the team.”

She said one of the highlights from last year was beating Chelsea all three times the rivals played. “They are our biggest rivals and it always feels good to sweep them,” she said. “Another highlight was when we beat Notre Dame Prep and Parma Western because those were probably our best games.” 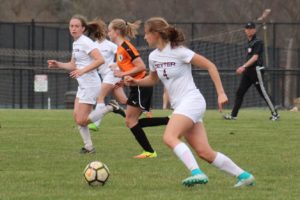 Tamer started playing soccer in Rec and Ed until the second grade before moving on to the Dexter Soccer Club “with all my friends.”

“I switched clubs because DSC wasn’t a viable option anymore,” she said. “I ended up at Alliance – now called Legends – and have been playing there ever since. I wasn’t totally sure about playing high school soccer because I had so much field hockey but I decided to a couple days before the tryout and am so glad that I did.

“My role on the team is to support other players and distribute the ball to our goal scorers. I am communicative on the field and like to talk a lot.”

Tamer doesn’t have to worry about where she is going to college – that’s already on the books. She is currently committed to the University of Michigan to play field hockey.

“I chose Michigan for so many reasons,” she said. “Their field hockey program and coaching staff resembles one of the best. That combined with their academics made it a no brainer. It also helped that my parents were both student-athletes at Michigan and my sister Emma currently plays field hockey there.”

Emma had a solid redshirt freshman season for U-M in field hockey. She was Academic All-Big Ten and appeared in 10 games in the midfield and backfield for the Wolverines.

Abigail, the daughter Keely and Chris Tamer, also excels in the classroom where her stat sheet includes a 4.0 grade-point average.

And speaking of her father, he played hockey at Michigan before spending 11 seasons in the NHL with the Pittsburgh Penguins, New York Rangers and Atlanta Thrashers. His daughters are certainly following in his successful athletic footsteps – from Dexter to Ann Arbor to Germany.