Now in their ninth year of competition, Dexter’s FIRST Robotics team #3656, the Dreadbots, qualified 14th of 40 teams at the Dow Field Division of the Michigan State Championships April 10-13 at Saginaw Valley State University. The Dreadbots qualified for finals competition with a 6-6-0 record against the best in the state.

While a few missteps cost the Dreadbots some ranking points, they were chosen to join the 8th alliance who fought to win the Dow Division, one of four divisions at this District championship event.  While most FIRST district events draw from multiple states, Michigan has so many teams that it comprises its own district.

In addition to on-field play, Dreadbot team members are needed for many other purposes at competitions. One of these is to convince event judges that Dexter’s team is worthy of valuable awards, which help qualify a team for World Championships.

Students staffing the Dreadbot’s pit facility held the attention of the judges for about 15 minutes, while answering all of their questions regarding robot construction, business plan, community involvement, and others.

Gabrielle Riaz, one of the Dreadbot’s co-captains, said she told the judges about, “Marketing to the community to get more support and lasting relationships.” Happily, the next day the Dreadbots received the Imagery Award. The Imagery Award observes the visual attractiveness of engineering and the team appearance. 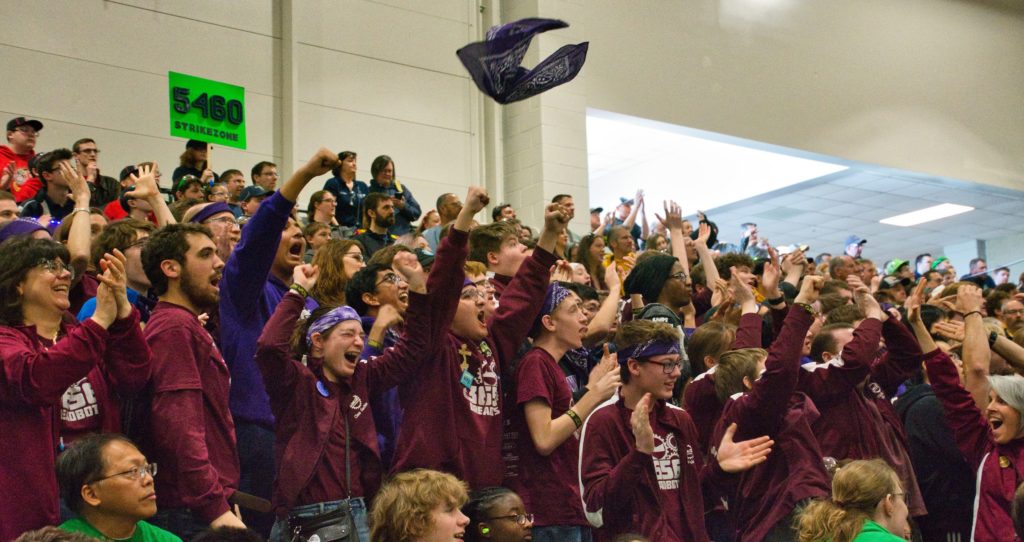 The students were shocked when they received this award since they had just been given t-shirts for the new year. The new design was created by a junior on the team, Gabrielle Riaz, to make the logo and team more noticeable from far away.

“I felt shocked, confused, and excited all at the same time,” Riaz said of winning the award, which makes 2019 the fourth consecutive year that the Dreadbots have received an award at the state competition.

Another important duty performed by Dreadbot students at competitions is scouting. Scouting generally refers to the process of identifying the strengths and weaknesses of other teams, important information since the Dreadbots will be playing both with and against every team at some point.

New to the Dreadbots at the State Competition was the use of electronic tablets to scout at this competition. Using the tablet instead of a sheet of paper makes scouting easier for the students collecting data and the students reading the data.

Scouting sub-team leader Nathan Miller said, “Now we can have more people focused on data analysis compared to just entering data.” The Dreadbots enjoyed working with the tablets instead of paper, as the tablets allow the team to be able to focus on the match and record more accurate data.

“We have a good chance (of doing well at the World Championship) especially if we fix all of our issues now,” said co-captain Andrew Merriman.

One issue was a motor mount failure in the third quarterfinal match against the #1 seeded alliance. When asked how stressful this competition was, team co-captain Christian Vaughan said, “With driving it’s honestly not that stressful, it’s really just down to getting in the zone and once you’re in the zone you really don’t feel any stress, you’re just driving the robot.”

In the quarterfinals, the Dreadbots and their alliance mates (the Pi Hi Samurai, team  #1076 from Pioneer High School, Ann Arbor and I.C.E. Cubed, team #4970 from Bark River-Harris High School, Harris) shocked the #1 division alliance with a defense-oriented strategy resulting in a solid win in the first match.

This win was even more absolute when an opposing robot committed a red-card foul that deleted all of their points causing a final score of 106-0 for the Dreadbots.

Unfortunately, the Dreadbot’s alliance couldn’t maintain their momentum for the next two matches. In the 2nd match, Dexter’s opponents chose a different strategy and benefitted from the loss of a camera and some lowered mechanical performance on Dexter’s alliance.

When it was all tied up at one win each, the final match went south for Dexter’s alliance. The Dreadbot’s robot suffered a catastrophic motor mount failure on their left-front wheel at the beginning of the match. The Dreadbots were dragging the motor the entire match. Dexter’s alliance partners also had problems with maintaining air-pressure, a lost drive chain, and a failed wheel.

The 1st seeded alliance for the Dow Division that knocked out Dexter’s alliance consisted of The RoboJackets (team #3538, Avondale High School, Auburn Hills), Strike Force (team #5460, Lapeer Community High School, Lapeer), and The Megatron Oracles (team #314 Carman-Ainsworth High School, Flint). This alliance went on to win the Dow Division, and place 2nd overall in the State Championships after an unprecedented 1-2-2 finals battle for the state title.

At the end of the State Championships, the Dreadbots were ranked 42nd in the state out of 539 competing teams, having earned a total of 211 ranking points. 69 points were earned from the Belleville event (1st place & Entrepreneurship Award), 58 points from the Lincoln event (2nd place & Creativity Award), and 84 more points from the qualifications, finals, and winning the Team Imagery Award (awards at District Championships are worth 15 points).