Some people just know how to sum things up so well. They can take everything that has happened over a short period of time and focus in on what is important in just a few words.

Maggie Tucker, one of Dexter’s top tennis players and a team leader, served up a perfect way of breaking down her four years of playing tennis for the Dreadnaughts.

“I am very proud of our team and what we have accomplished throughout my four years of playing and I am very grateful for all of the experiences I have been given,” she said so perfectly – like one of her volleys at the net. “Coach Rob and Anand have become so much more than coaches to me but rather mentors and my friends. They saw potential in me that I did not know even existed. I have learned so much from them not only about tennis, but about life. This team has become my family and I would not trade the last four years with them for anything.”

Well, not quite so fast. There is more to this story.

Tucker made her way up the roster during her four years with the Dreads. She started at four singles as a freshman before switching to three doubles as a sophomore. She played two singles last year where she finished second in the SEC and will return to two singles for her senior year. 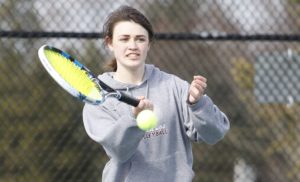 Now that she’s a senior, Tucker has accepted the role of leader and mentor and is eager to pass down to others some of her experience and expertise.

“I encourage the girls on the team and try to keep spirits up,” she says. “Ultimately the goal is to improve and become a better team all together. I want to help the coaches build a close-knit team so that we can have better team chemistry. And, like all other sports in Dexter, we want to beat Chelsea.”

That’s what we’re talking about!

Tennis was in the family so Tucker just tagged along when she was young.

“My uncle taught at a tennis facility and all of his kids went there,” she says. “I spent so much time with their family and would go there all the time to hang out with my cousins and ended up watching them play and seeing how fun tennis looked. I eventually signed up for classes and he taught me how to play.”

Maggie, the daughter of Jason and Janell Tucker, already has her next chapter figured out. And of course it involves tennis. 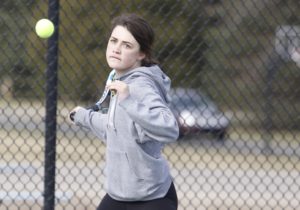 “I have a tennis scholarship to Concordia University in Ann Arbor,” she said. “I plan to attend that school and major in Nursing.”

But there is more tennis to be played for the Dreadnaughts, who have had plenty of success over the years. Tucker gives part of the credit to the atmosphere created by the coaches.

“I think that coaches Rob and Anand are a big factor of our success,” says Tucker. “They know what they are doing and they are both amazing tennis players themselves. They are able to create an amazing coach-athlete connection that allows everyone to learn something about tennis.”

Of course, it also helps to have “amazing” athletes.

“No matter how long we have been playing tennis our players are able to adapt to certain situations and in the end get a W,” Tucker says. “Lastly I believe that this team cares about winning, but in the end we want to have a good time. When we look on the bright side of the situation, we are able to make the most of it and ultimately pull the win.”